Maxine J. Schwartz, an East Aurora nursing home resident who had dementia, would only eat if her daughter was there to encourage her.

After New York State banned visitations to nursing homes March 13 because of the Covid-19 pandemic, Dorothy Carlone said she obtained special permission from the state Health Department to visit and feed her mom at Absolut Center for Nursing and Rehabilitation at Aurora Park.

But the nursing home still refused to let her in.

Carlone said her worst fear came true 14 days later when her 92-year-old mother died from what Carlone believes was starvation.

Schwartz's death certificate listed heart failure as the primary cause of death, but Carlone says the secondary cause listed was more telling: “Failure to thrive.”

Carlone said her mom’s death could have been avoided if the nursing home had allowed her to visit and help feed her mother.

“I told them if I couldn't be there to care for her, she would starve and eventually die — which is what happened," Carlone wrote in a complaint to the state Health Department. "She wouldn't eat for anyone but me."

“The day she died, the two CNAs who had cared for her for over a year both told me that they tried to get her to eat for the two weeks I wasn't there but that all they could get her to do was drink a little,” Carlone wrote, while requesting an investigation into her mother’s death. 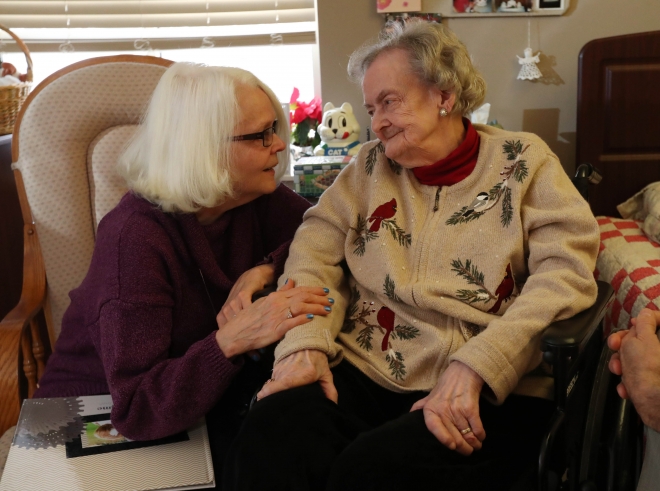 Maxine Schwartz, on right, with her daughter Dorothy Carlone in a photo taken Jan. 22, 2019, at Absolut Center for Nursing and Rehabilitation at Aurora Park. (Sharon Cantillon/Buffalo News)

Jason Newman, a spokesman for the company operating the Absolut nursing home, said federal privacy laws prohibit the nursing home from discussing a patient's medical history. He declined to comment on Carlone's allegations.

In the complaint to the state, Carlone said she sought and received special permission from a Health Department official in Buffalo to enter the nursing home and assist at meals, but the nursing home had refused to go along with the approval.

Carlone identified Gloria Duffey, the Health Department’s acting program director in the Buffalo area, as the official who advised her that an exception had been made for her to assist in her mother's care. Duffey did not tell her when the state approved the exception, Carlone said.

Carlone said the Health Department has not responded to her complaint.

Last year, Carlone was a staunch public defender of the nursing home as relatives of other residents held protests outside the facility over poor care being provided there.

“The nurses are wonderful. The in-house doctor is the best elder care doctor I have ever met. Everything has been perfect from Day One,” Carlone told The Buffalo News in February 2019.

She said Tuesday she had been working with Absolut officials to improve the level of care to residents and, at their request, alerting them when she spotted shortcomings.

For years, the federal government rated Absolut at Aurora Park as among the worst of the more than 600 nursing homes in New York State.

A Long Island company is in the process of purchasing the Absolut nursing home chain, which filed for Chapter 11 bankruptcy last year.

Farbenblum, who is the majority co-owner of the McGuire Group's five top rated nursing homes in the Buffalo area, has said he intends to turn around the East Aurora facility and make it an example of quality long-term care. He has said he hopes to complete the transfer of ownership later this year.

The facility’s ratings from the federal government have improved in recent months. It now has an overall rating of two stars, or "below average," from the U.S. Centers for Medicare and Medicaid Services.

The change in ownership is of little consolation to Carlone.

Carlone said she was allowed to enter the nursing home March 27 and be at her mother's side as she died.

“I sat with my mother as she gasped for breath, looking thin and gaunt. She wasn't OK like they said she was. She suffered. It broke my heart. It stopped her heart,” the daughter said.

She said she and her husband, Dr. John Carlone, a chiropractic physician, had helped care for Schwartz at the nursing home for more than a year because they realized the facility lacked the staffing resources to provide the level of care her mother required. 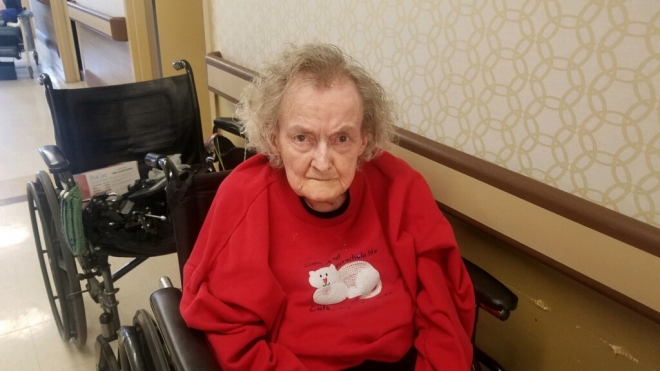 Maxine Schwartz, 92, in a photo taken two days before she died March 27. 2020, at Absolut Center for Nursing and Rehabilitation at Aurora Park. (Photo courtesy of Dorothy Carlone)

“My husband was her doctor since 1989. He cared for her and saw her every week. I went to the nursing home every day, the entire 15 months she was there, never missing a day to feed her, fix her hair, toilet her, walk and exercise her,” Carlone said. “It was for 442 days.”

But when the ban on visitation started, she said her husband was also prohibited from treating her mother because he lacked “privileges” at the facility.

“Yet they had allowed him to treat her and consult on her care for 15 months prior to the lockdown,” Carlone said.

By going public with her concerns, Carlone said she is demanding that the state respond quickly when complaints are filed against nursing homes.

“It usually takes them months to do the investigation when there is a complaint. The response should be within 24 hours,” she said.

Carlone is also taking aim at a new state law that exempts nursing homes from legal liability during the coronavirus pandemic.

“If this decree is allowed to stand without being challenged, the nursing homes will think no one can touch them. More people will die from neglect and no one will know or care,” she said.

Gov. Andrew M. Cuomo’s executive order exempts medical professionals from civil liability for any injury or death “alleged to have been sustained directly as a result of an act or omission by such medical professional in the course of providing medical services in support of the state’s response to the COVID-19 outbreak.”

The only exemption is if the injury or death “was caused by the gross negligence."