As soon as the clock ticks past midnight Saturday, some diehard fishermen will target walleyes in Western New York waters on what will be May 2 — opening day. The two most popular bodies of walleye water here are Lake Erie and Chautauqua Lake, and are your best bet at connecting with these tasty table fare. It is time to start refilling your freezers.

The headline act in everyone’s book is Lake Erie. Population numbers for these fish, age 2 or better, are estimated at 116 million fish. You read that right. There will be even more in 2021. With so many fish in the lake, you just need to be on the lake making sure your presentation is right and in an area holding some fish. They should not be hard to find. What will work best for the opener for this Great Lake?

Everyone has their favorite style of fishing and their approach to different times of year. Bob Rustowicz of Cheektowaga enjoys the night fishing to kick off things.

“With the lake temperature being around 42 degrees,” predicts Rustowicz, a former charter captain, “walleye fishing at night should be prime from the get-go. Fishing with stickbaits like Rapalas, Bombers, Mooneyes and such, in anywhere from 5 to 15 feet of water between Buffalo and the Pennsylvania state line around reefs and shoals, should be excellent fishing.” 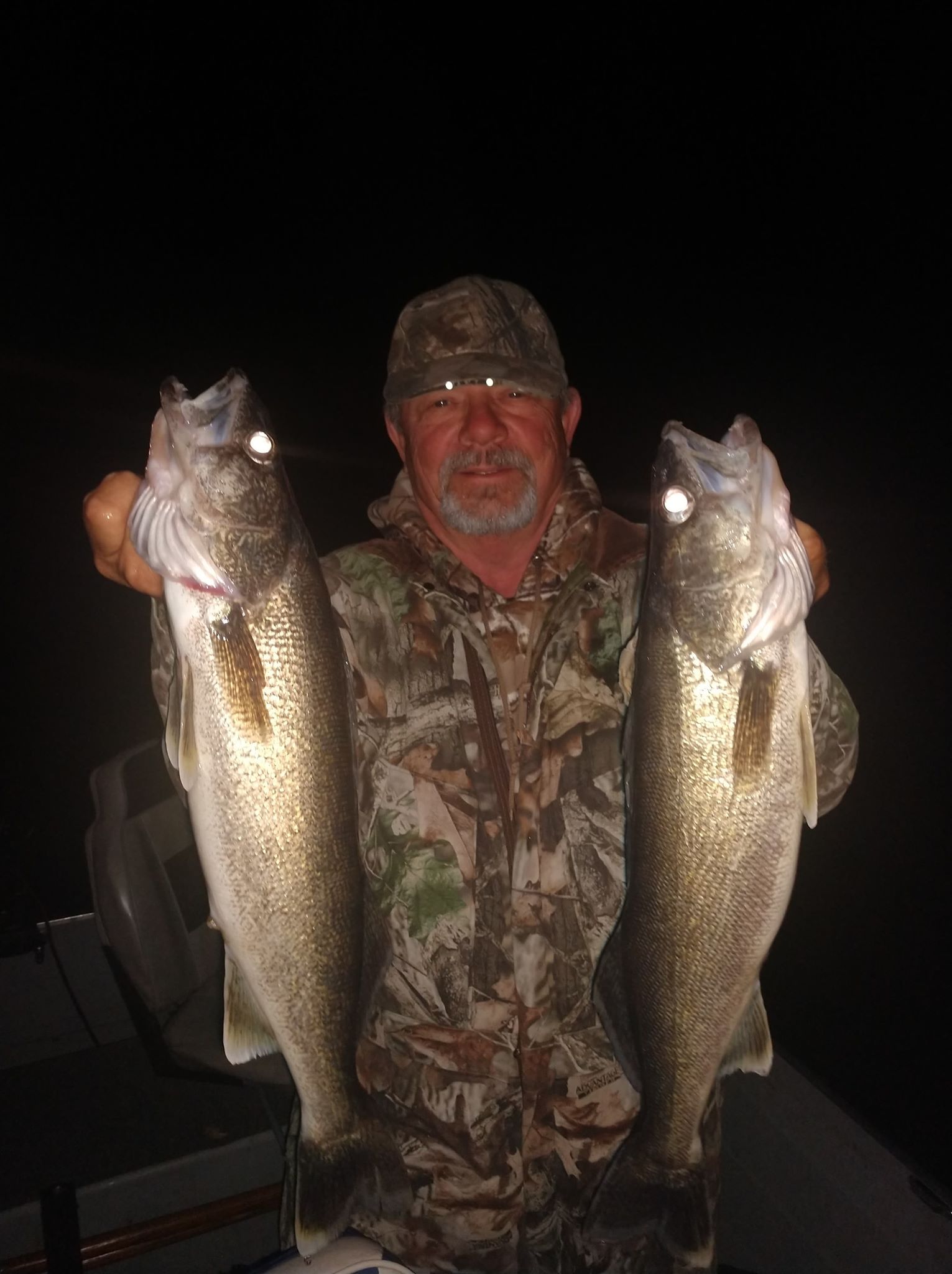 “I use either chartreuse or a darker color lure for my favorites, long lining with 100 to 130 feet of line out behind the boat. Trolling between 1.2 mph and 2 miles per hour should get you a fast limit. I do not like to use glow in the dark lures. The only light we use is a small flashlight or a small light that attaches to our fishing cap. We usually start our fishing at 8:30 p.m. and quit when we catch a limit, which isn’t long on a normal night.”

Night fishing is not for everyone, though. Some people prefer to see the lake and where they are headed if they are trolling. Rob Oram of Franklinville is no stranger to Lake Erie when it comes to walleye fishing. Some might argue that the fish will find him.

“There are a few methods that will work for opening weekend of the walleye season,” Oram said. “I’ve been out fishing for perch this week and we can’t help but catch walleye no matter where we go. Water temperatures are around 45 degrees and I have been marking quite a few suspended walleyes on my boat electronics.”

If you want to troll for walleyes, Oram insists you could just throw on some stickbaits like Rapalas or Storm Thundersticks and focus in the top 20 feet of water, especially if there is some stain or tint to the water. If there is a mud line, work the edge.

Because he has been catching so many walleyes while perch fishing, that offers another option for anglers.

“Seek out the perch in 50 to 60 feet of water and try to target the 'eyes with minnows on the bottom,” says Oram. “You’ll be able to catch both perch and walleye. You could also be a bit more aggressive and use a method for walleyes involving Jigging Rapalas or Shiver Minnows.”

Another option, says Oram, is to try dragging a jig with a twister tail or a bucktail, possibly tipped with a minnow or crawler, through the mud on the bottom in 15 to 20 feet of water. There will be fish hanging around that you should be able to catch.

Capt. Joel Ruggiero Sr. of Angola runs his charter vessel out of Dunkirk starting in early June, a 26-foot Sea Ray Amberjack named the Bait Master. However, he does not neglect the early season action by fishing with friends during the day or at night. One thing that will hurt which part of the lake he focuses on is not having Sturgeon Point as a functioning harbor and launch ramp.

“Having Sturgeon Point closed will force us to launch at Cattaraugus Creek and it’s a long run to get to Sturgeon,” says Ruggiero. “It will force a lot of fishermen to Dunkirk, too.”

During the day, Ruggiero will run Berkley Flicker Minnows with monofilament line and fluorocarbon leader 125 feet back of inline planer boards.

He also will run 2 to 3 colors of lead core line, also with 50 to 75 feet of fluorocarbon leader, behind the inland boards. “I also like to run J11 Rapalas in orange or chartreuse. Renosky and Bomber stickbaits work well for him, too. He will concentrate his efforts around structure in 30 to 35 feet of water from Sturgeon Point to Barcelona. 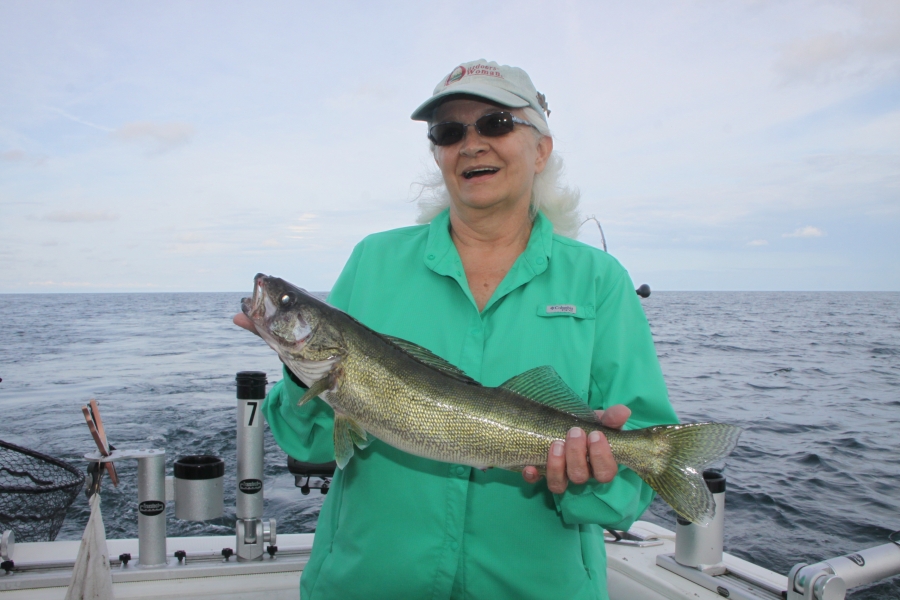 He can run a similar program at night in 5 to 10 feet of water just flatlining off the back of the boat. No boards are used at night. He uses Rapalas and glow-in-the-dark Storm lures that he throws in his light box. Hotspots at night in the past include Evans Bar, Van Buren and the state park near Dunkirk. However, this is where we need to emphasize that you do not have to follow anyone around or get too close to other boats. Did we say that there are an estimated 116 million fish in the lake?

One method not previously mentioned is simply using a 3-way rig and bouncing the bottom with a worm harness or a minnow. You can simply drift or use a bow mount trolling motor to move you slowly along or for boat control. Do not rule that out as an option no matter where you fish.

Lake Erie can be a fickle lake though. With the amount of wind that we have already experienced this spring, there is a good chance that the lake will be too rough to fish for most. If that is the case, you have a couple safety valves that can at least get you on the water.

“The night trolling has always been the tradition for opening weekend at Chautauqua Lake,” says Oram. “Try trolling the shoreline until you find an area that is holding some fish, then working that area back and forth. The Rapala F11 and F9 and the jointed ones are always a good bet as well as the Junior Thundersticks.”

For day fishing, the south end is typically good by trolling stickbaits and targeting the fish near the bottom, according to Oram. Shad-type lures work well there, too, like a Flicker Shad or Shad Rap.

“For the north end, trolling 3-way rigs with small sticks, again targeting near the bottom,” says Oram. “Also, jigging around the edges of the deeper holes may be productive.”

Another local alternative should Lake Erie be too rough would be to fish inside the breakwalls at Buffalo Harbor or in the upper Niagara River. Trolling, casting or bottom bouncing are viable options to try and catch yourself a walleye dinner.

If you are stuck from shore, the foot of Ferry Street is always a good casting spot with jigs or swim baits during the day or at night. Go out and find your own spots to fish from. Good luck and good fishing.