The City of Niagara Falls expects that the economic shutdown resulting from the Covid-19 pandemic will blow a hole in its budget.

But Mayor Robert M. Restaino said Monday that the city has yet to decide how it will respond to a projected loss of about $4.7 million in sales taxes and parking revenues.

"The road ahead will be difficult as my administration continues to work with our department heads and will be meeting with our city union representatives to come up with cost-saving solutions to address this shortfall," Restaino said in a news release. 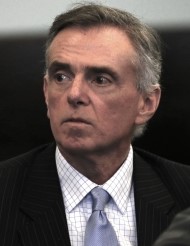 About $17 million of the city's $95 million budget is covered by state aid, which Anthony Restaino said could be jeopardized by the state's own financial woes.

And the city budget assumes it will receive $9.2 million in Seneca Niagara Casino revenues, either from the Senecas or the state, after Gov. Andrew M. Cuomo's 2018 pledge to make the city whole in the face of the Senecas' refusal to pay.

So far, that money hasn't come from either source.

The mayor's statement said the city is projecting a 27% drop in sales taxes on hotel, restaurant and utility bills.

By law, the city grabs the entire local share of those "HRU taxes" rather than sharing them with Niagara County. The city expected $8 million in HRU taxes this year; a 27% reduction would cost it $2.16 million.

The city also receives a share of sales taxes collected in the county on other types of transactions. It budgeted $9.3 million this year, but now projects that will fall 17%, costing the city about $1.6 million.

Revenue from parking ramps, lots and meters, a key revenue tied to tourism levels, is projected to fall 33%, or $900,000.

"These projections are based on the downturn in the tourism and hospitality industry, the closing of the Canadian border and the closing of nonessential businesses throughout the city," Mayor Restaino said.

He said he will take part in a regional conference this week on economic reopening, which he said he is "anxiously awaiting," but he doesn't want that to come at the expense of public health.

"I again call on public officials to set the proper example regarding face coverings, social distancing, etc.," the mayor said.