Amid one of the greatest American health crises in a century, most of Prime Care Transportation Inc.'s 15 medical transport vans sit idle, just like most of its 23 employees. Business at the Buffalo company dropped 80% as people put off nonessential health care amid the Covid-19 shutdown.

So far, the loan programs Congress created to help small businesses like Prime Care usually haven't done so. According to a national survey released last week, only one in five of the businesses that applied under the larger of the two loan programs had gotten any money yet.

Without a government-backed loan, Prime Care is down to seven employees. And a company that had been thriving and growing faces an uncertain future.

"Everything has been put on hold," said Christine Uwimbabazi, who founded the company with her husband two years ago.

Much of life in America has been put on hold amid the coronavirus pandemic – including the Paycheck Protection Program aimed at keeping small businesses afloat. Congress set aside $349 billion for the "PPP" in late March. The forgivable loan program, which aimed to cover payrolls through June 30, ran out of money on April 16. Lawmakers last week set aside another $310 billion to the program.

"Clearly there were not even remotely enough funds to fund that program," said Buffalo business attorney Matthew K. Pelkey, who has been helping clients through the loan process.

But according to Buffalo small business people and nonprofit leaders, the PPP and a smaller Economic Injury Disaster Loan program face problems that go far beyond money.

Many businesses, like Prime Care, face long waits in getting their loans approved. Others haven't navigated the system well enough to even apply. In most cases, according to small business experts, companies need a strong banking relationship to get money.

It all leaves entrepreneurs like Uwimbabazi frustrated. She received documents last week indicating her PPP loan might finally come through, but she hasn't heard a word about her disaster loan application.

"I applied a long time ago, and there is no follow-up,"  she said. "There is nothing. You just have to wait."

Corina Stammworthy always saw the business she started in 2013, the Laundromutt pet grooming salon in Kenmore, as "the little engine that could." Business was so good that Stammworthy was considering opening another location.

But then New York State closed nonessential businesses, including Laundromutt, on March 23. Stammworthy quickly got an Economic Injury Disaster Loan, which allowed her to pay her 16 employees for a few weeks. But with her longer-term PPP loan pending, she had to lay off her employees April 13.

"I was pretty confident that our bank would process our loan quickly, and they didn't process it in time and the money ran out," Stammworthy said. "It took 17 days to get it done. It was supposed to have a 72-hour turnaround time." 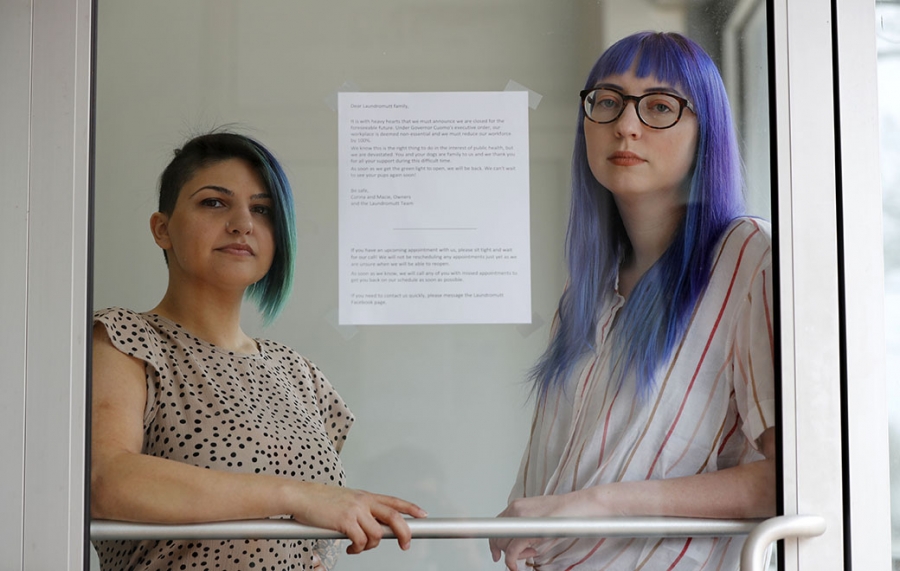 Businesses across the country are having similar experiences, said the National Association of Independent Businesses, which published that survey showing that 80% of small businesses hadn't gotten their money.

“Small businesses were prepared and ready to apply for these programs, the only financial support options for most, and it is very frustrating that the majority of these true small businesses haven’t received their loan yet,” said Holly Wade, the business group's director of research and policy analysis.

To hear the Trump administration tell it, the Small Business Administration and the private lenders who participate in the PPP programs did all they could as fast as they could once the program opened.

"Following its launch, the SBA processed more than 14 years’ worth of loans in less than 14 days, which will protect a vast number of American jobs," Treasury Secretary Steven T. Mnuchin and SBA Administrator Jovita Carranza said in a statement.

But several people who deal with the program said the money isn't arriving in business bank accounts fast enough, often because some banks are overwhelmed by the number of applications.

"Certain banks seem to be more on their game than other banks," said Anthony J. Ogorek, a Williamsville financial planner with clients that have applied for PPP loans.

That's certainly what Stammworthy thinks. Once the crisis passes, she said she's planning to leave Bank of America – which said online that it had received hundreds of thousands of loan applications – for a local lender.

"I'm completely disillusioned with the process," she said. "When the (PPP) money ran out, no one had even processed my application yet."

Save the Michaels of the World has been trying to save Buffalo-area addicts for years now, but the job grew harder when the local nonprofit had to close its offices, but not its operations, amid the pandemic. Transportation costs skyrocketed as social distancing dictated that only two people ride in vehicles that transport patients to treatment. Founder Avi Israel said the organization had to spend $10,000 for laptops so employees could work from home.

With those thoughts in mind, Israel sat down at his computer Thursday night to try for a second time to apply for a PPP loan through M&T Bank's website. For a second time, he got nowhere.

"The website just kept getting slower and slower," Israel said. "And by the time it got to like eight o'clock, it kicked us out. It wasn't taking applications anymore."

That points to a second problem that has plagued the PPP, but not the smaller emergency loan program. Some eligible small businesses and nonprofits haven't even managed to apply – while some far larger companies have gotten loans they didn't deserve. 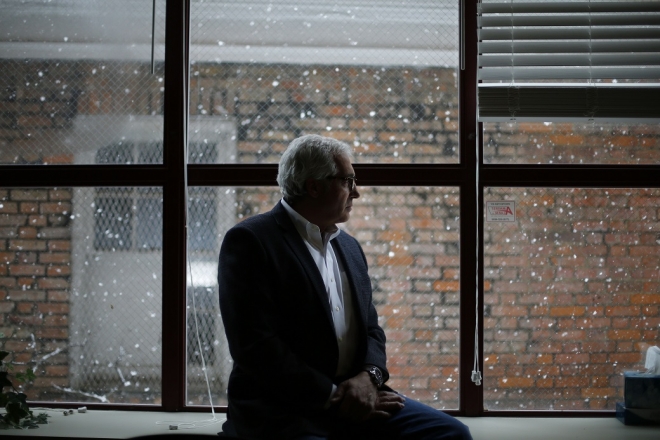 Save the Michaels of the World President Avi Israel at the office at the corner of Summer and Main streets in Buffalo in 2017. (Mark Mulville/News file photo)

"We've stopped taking applications at this time based on the demand and our commitment to assist as many M&T customers as possible and ensure that those who apply have the greatest opportunity to receive the limited SBA funds," the bank said on its website.

Nationally, however, a loophole in the law that created the PPP left an image problem. It allowed restaurant chains including Shake Shack and Ruth's Chris Steak House to apply for loans.

Those big operations are now saying they will give their loan money back, but the PPP program still allows companies with up to 500 employees to apply. That limit is too high, said Susan A. McCartney, director of the Small Business Development Center at SUNY Buffalo State.

"That is very different than the small businesses struggling in Western New York," she said.

Israel agreed. He groused that some local operations far larger than his got PPP loans while he hasn't even been able to apply.

"Here we are, a small organization that does everything for free," he said. "We have not laid off people off – but we're going to run out of payroll money by May."

Of course, the federal loan programs haven't left all small businesses starved for funds. BIDCO Marine Group, a Buffalo industrial diving company, applied for and quickly got a PPP loan.

"I think we were prudent and diligent in the application process," said Mark C. Judd, the company's president. "I think that was a requirement, and having an established financial relationship was undoubtedly the key to that."

Rather than go to a bank website like Israel did, Judd worked through his company's banker at Bank on Buffalo and couldn't be happier with the PPP program.

"It did exactly what they said it would for my business. It gave me security to not lay anybody off," said Judd, whose company employs between 20 and 40 people, depending on how much work it has.

Marty Griffith, Bank on Buffalo's president, said employees across the bank worked long hours to process as many applications as possible during the short time the funds were available. "We will do it again," he added.

The question, though, is: for how long?

Even with a $310 billion infusion, the PPP program probably won't come close to addressing the need in an economy wrecked by the shutdown, said McCartney, of the Small Business Development Center.

"In three or four days, it'll be gone," she said of the money added to the PPP program.

Worse yet, several people said the rush for cash is leaving behind plenty of small businesses whose owners don't even know about the PPP and disaster loan programs.

"It kind of blows my mind a little bit, but I've mentioned it to some rural folks down near Ellicottville and I was looked upon with raised eyebrows," said Judd, the BIDCO Marine Group president. "And I said, really, this is there, you need to go to your bank or go to the SBA now."

Here's a look at the two primary federal programs aimed at helping businesses deal with the fallout from Covid-19.

The Paycheck Protection Program: Congress set aside $349 billion for this effort in late March, but it quickly ran out of money, so lawmakers added $310 billion last week. The program allows qualifying companies with fewer than 500 employees to get loans of up to 2.5 times their monthly payroll costs for up to eight weeks. Three quarters of the money must be devoted to payroll, but the rest can go to rent, utilities and other costs. All or part of the loan can be forgiven for companies that keep their employment and wages steady.

The Economic Injury Disaster Loan Program: This program existed before the Covid-19 crisis, but in late March Congress created a $10 billion supplement to it. The program is intended to give qualifying small business quick cash advances of $1,000 per employee, for up to 10 employees. Like the Paycheck Protection Program, this $10 billion fund quickly ran dry, prompting Congress to add another $60 billion to it in legislation that passed last week.