As its bus, rail and airport numbers plummet, the Niagara Frontier Transportation Authority says changes in how it operates because of Covid-19 could stretch well into the future.

NFTA officials are coping with drastic reductions in ridership aboard Metro Bus and Rail.

"The way our system operates and the way we deliver services could change significantly in the next number of years," said Thomas George, director of public transit for the authority.

And the authority's Buffalo Niagara International Airport has faded into a ghost town as travelers avoid the kind of public contact that health experts say can spread the deadly virus.

"It's hard to imagine it will return to normal five months from now," NFTA Executive Director Kimberley A. Minkel said of airport operations. "There are big concerns down the road."

NFTA Director of Aviation William R. Vanecek said the airport normally handles about 7,500 passengers a day. On Wednesday it counted 279.

"One of the airlines was clapping their hands yesterday because they had 35 people on a plane," he said. 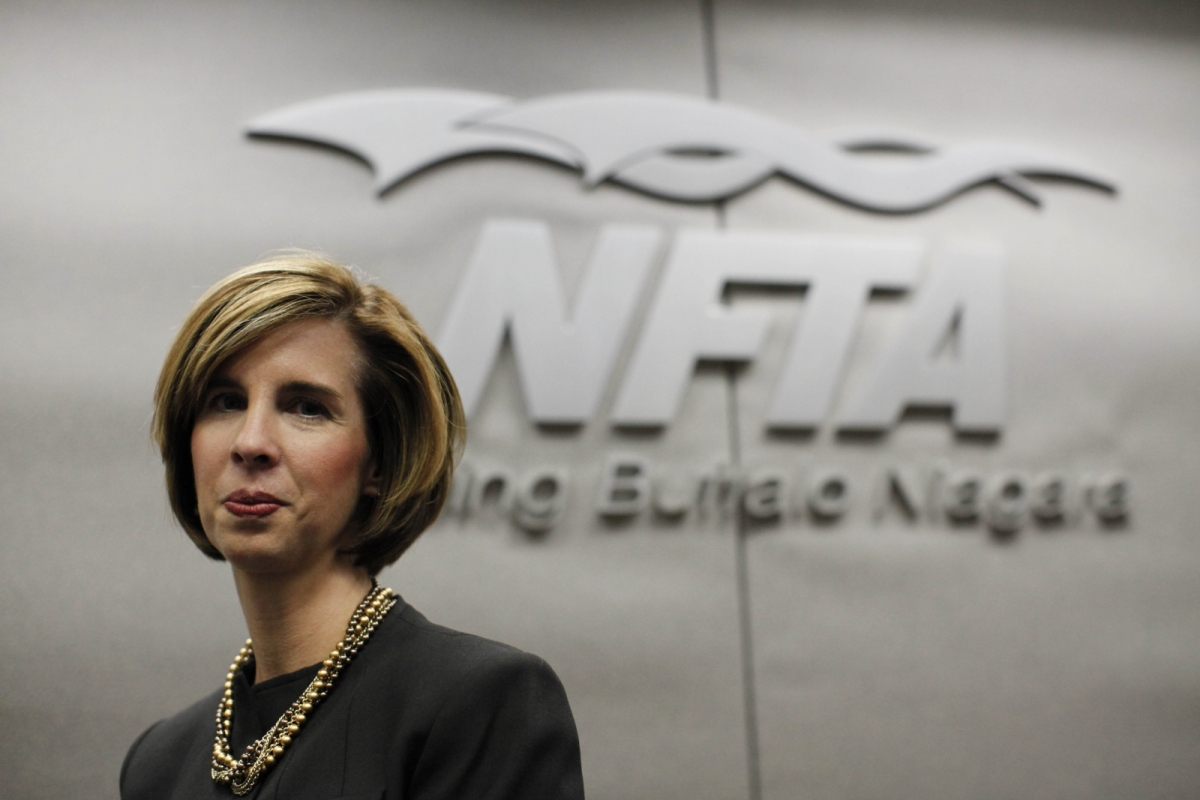 Bus and rail ridership faces "continued erosion," partly because the NFTA is discouraging ridership for all but essential travel, George said.

"We anticipate a long-term erosion in ridership," he said. "Telecommuting could have a big impact."

For Metro Bus and Rail, George reported that efforts to discourage anyone but essential riders continue, with the "highest level of social distancing ... to protect employees and riders."

Minkel said 48 of the authority's 1,600 employees are in "self-quarantine," with eight confirmed Covid-19 cases.

Plexiglass shields to separate drivers from passengers have been installed in about 100 of the system's 268 buses, George said. Metro Bus now requires all passengers (except those using wheelchairs) to enter and exit via the rear door to minimize contact. As a result, fares are no longer collected.

On some bus routes, dispatchers will send "chase buses" to handle larger numbers of passengers, arriving within two to five minutes.

"So if we have higher ridership we have more capacity to spread out folks," George said.

Sometimes, he said, drivers have to confront bus ridership levels they would normally welcome but must now discourage because of social distancing concerns.

"It's very, very difficult if not impossible to enforce that," George said.

"I think 'brave' is a great word for what our operators are demonstrating right now," he added.

Authority spokeswoman Helen Tederous said Metro remains committed to providing transportation because many of its riders are commuting to essential jobs. But she said the change in the system is palpable.

"There's an energy to a bus or rail system, with people constantly getting on and getting off," she said. "That's gone. It's quiet."

John Schaefer, NFTA director of engineering, added that the authority now spends around $2,100 per month on additional cleaning supplies for Metro vehicles and stations, as well as $13,500 more for the services of outside cleaning firms.

George also noted that Metro closed its transit hub on Portage Road in Niagara Falls on March 27 and limited access to the Metropolitan Transportation Center, its downtown Buffalo bus station on Ellicott Street, from 6 a.m. to 11 p.m.

Major capital improvement projects are also on hold as a result of the crisis, George said. They include the $3.6 million project to replace the Humboldt-Hospital Station escalator and the $810,000 plan to install another compressed natural gas compressor at Cold Spring Garage.

The plan to introduce the new $23.4 million fare collection system throughout Metro Rail slated for later this year has also been delayed, George said.

At the airport, parking lot collectors have been reduced and the economy lot is completely closed. Vanecek said private contractors directing traffic have been cut to a "skeleton crew," the baggage handling staff is reduced, and the $8.5 million de-icing containment project is delayed. He added that concession operations in the terminal are vastly reduced, and only cash is accepted there or in parking lots.

Still, he noted that the airport's $80 million expansion project remains on schedule, as does work on new concessions within the airport.