A health care worker who sent her daughters to stay with family in Florida.

A tow truck driver who can no longer give rides to customers.

There are 2.2 million essential workers across the state – 311,000 in upstate New York, per the Fiscal Policy Institute – and many do not have the option of working from home.

Many have no choice but to be out in the world. But their jobs have changed dramatically.

Here are some of their stories. 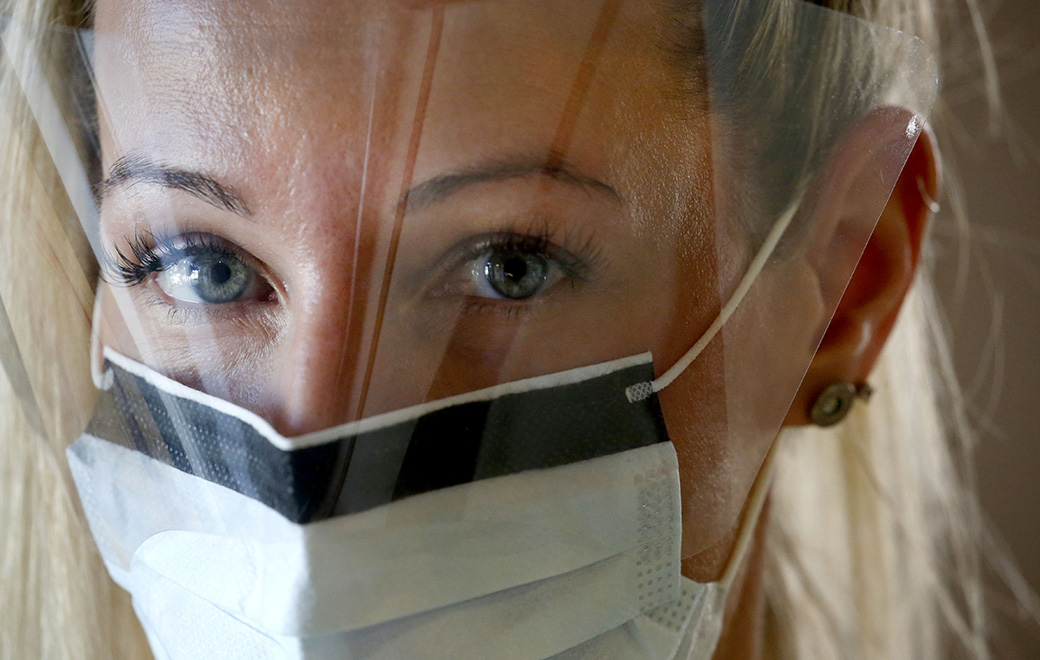 Jamie Snyder's life has changed in many ways since Covid-19.

On March 17, Jamie Snyder sent her daughters to go stay with her mother-in-law in Florida because schools were closed and she knew that being in the medical field, she'd be needed at work.

"I FaceTime with them every day, but it’s different not being able to be with my girls every day," said Snyder, a radiology technician at Western New York Immediate Care in Orchard Park and Cheektowaga.

Work has been different, too. "Typically, this time of year I’m usually seeing a lot of sports injuries, but lately it’s mainly been patients coming in needing chest X-rays," Snyder said.

The urgent care center has instituted new protocols. They are using "an upfront triage process, where patients get their temperature checked upon entering the building," she said. "We’ve also been asking any additional family members to remain in the car while their loved one is being seen in order to limit their exposure," she said.

The staff does a morning huddle to make sure everyone knows what's going on. 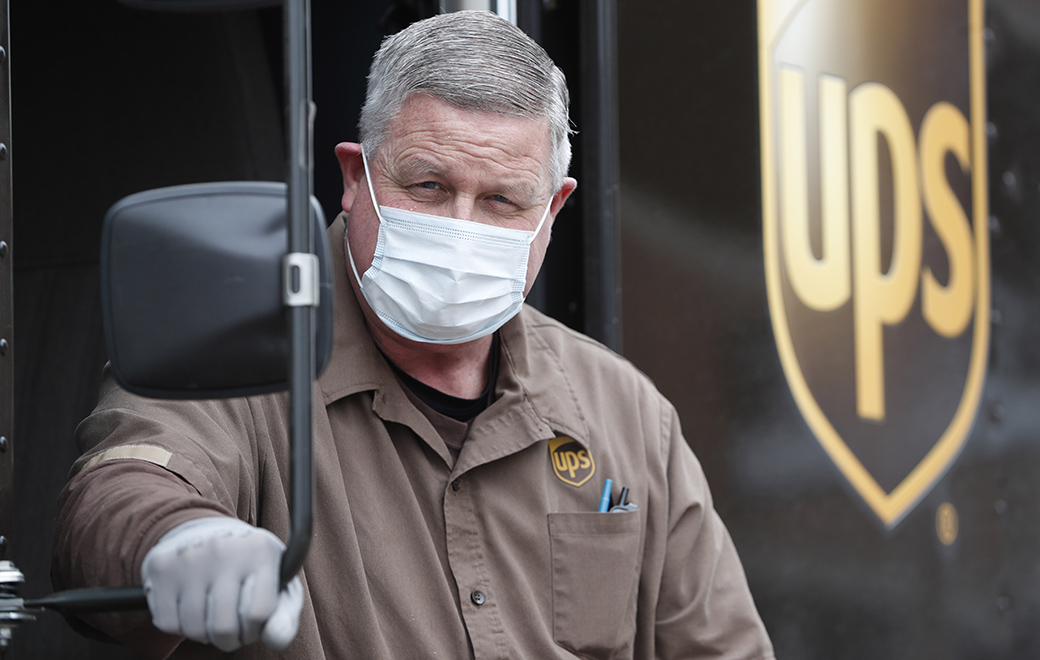 Matt Riter, a driver for UPS, is an essential worker during the Covid-19 quarantine. He is pictured on Wednesday, April 8, 2020. (Sharon Cantillon/Buffalo News)

As a veteran driver for UPS, Matt Riter said he knew that he'd be working through the pandemic.

"I started in 1987 and when the ice storm hit, we were only down for a day or two. The city was shut down for like 11 days," he recalled. And when UPS when on strike in 1997, President Bill Clinton forced them to return after two weeks "because we were literally affecting the country."

He's been delivering a lot of medicine and alcohol to people's houses, he said. "And toilet paper."

Some odd items too. Like hot tubs and grills.

UPS has changed some of the ways it handles deliveries, he said. They don't ask people to sign for packages. For higher-end items, the driver makes visual contact with the recipient, then writes "Covid" in the signature spot and types in the last name.

"People leave notes to say thank you," he said. "People thank you pretty much all day, which is kind of weird. That happens more than you think." 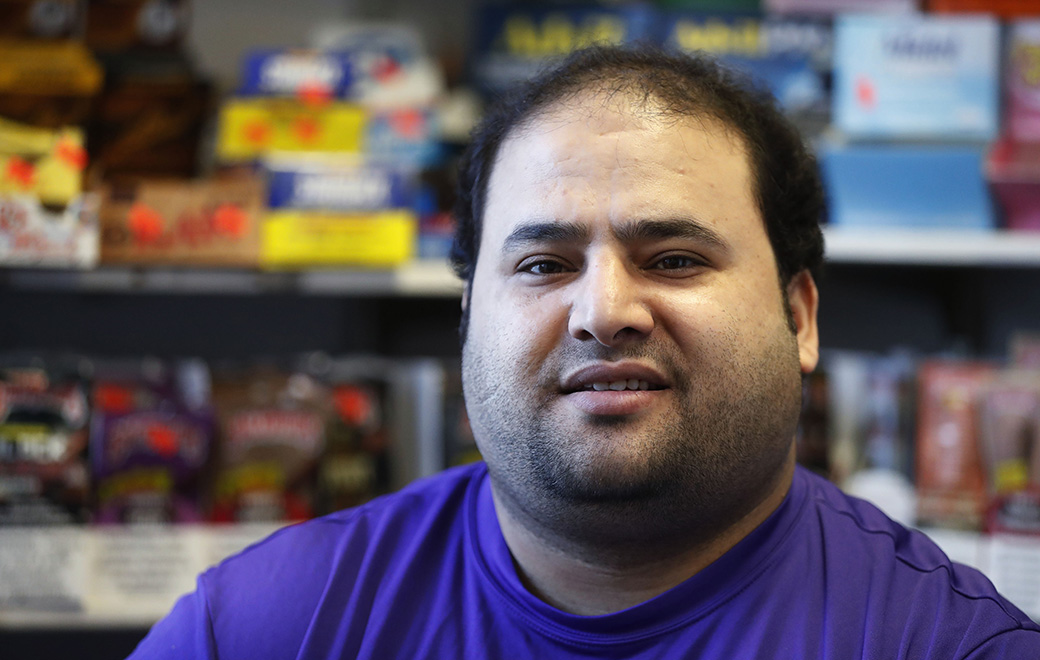 Omar Aoomari is an employee at Gold Star Gas Mart at Genesee and Best streets. He is pictured on Friday, March 27, 2020. (Sharon Cantillon/Buffalo News)

Business has been slow these days at the Gold Star Gas Mart on Genesee Street.

"Not too much people," said Omar Aoomari, a worker there. "There's no people on the streets."

Gas stations and food stores have been classified as "essential" but few people are stopping by to get gas.

When customers do come, they buy pop, cigarettes and lottery tickets.

Aoomari worries about how he'll keep supporting his wife and two children who live in Yemen.

"I'm trying to get them here," he said. So far, coronavirus hasn't hit Yemen, he said. But he's concerned what the future may hold.

For now, he will keep working. He wears a mask and gloves and cleans his hands with rubbing alcohol while awaiting the next customer, whenever that might be.

"I move around. I clean sometimes. Wash things. It's crazy. That's all I can say," Aoomari said.

Tow truck driver and owner of the Only Choice Auto Towing 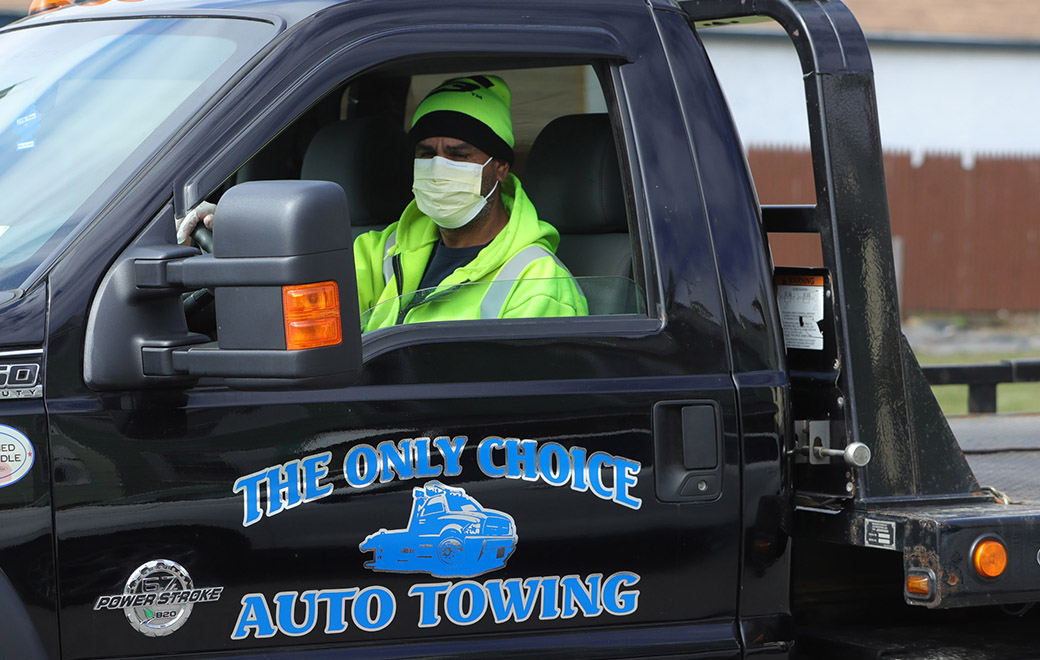 Tow truck companies have been deemed an "essential" business by the state. But that doesn't mean there is much business.

"I'm not making enough money," said Jose Deleon, who has run the Only Choice Auto Towing on Buffalo's West Side for about 10 years now.

"I haven't towed for a while," he said. "It's hurting everybody. I gotta do a payment on my truck. I gotta pay my insurance."

He's changed the way he handles tows. If customers need their car towed, he has them leave the keys and payment in the car.

He no longer allows customers to ride with him in his truck.

"They gotta call a ride or an Uber. I'm not putting anybody in the truck. They've gotta keep the distance." 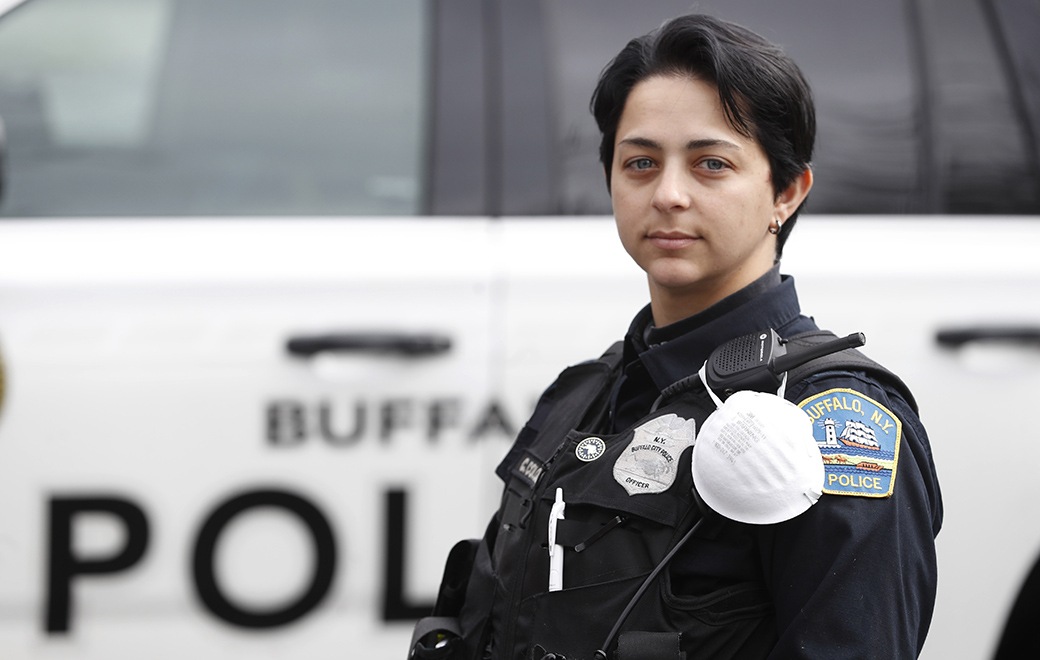 Buffalo Police Officer Christina Colosimo works in the Traffic Unit. Her first day back on the job since being sick and quarantined was Tuesday, March 31, 2020. (Sharon Cantillon/Buffalo News)

Crime has gone way down in Buffalo during the pandemic, but that doesn't mean the city's police officers have been any less busy, said Buffalo Police Officer Christina Colosimo. She is assigned to the Traffic Unit.

On April 9, she spent the morning helping deliver fresh produce to shut-in seniors on the East and West sides of the city. Later that day, she was on duty outside the emergency room at Sisters Hospital.

Police have eased off on giving out tickets and most people seem to be obeying traffic laws, Colosimo said.

"You have your periodical idiot who goes 50 to 60 in a 30 mph zone," she said. "Then you get stopped and get a ticket. Just because this is going on, it's not a free-for-all."

The DMV has extended renewal deadlines for driver's licenses, registration and inspections. But Colosimo said traffic cops are making car stops if they notice hazardous situations. "If you have your brake lights out, I want you to know. You should get that fixed," she said. 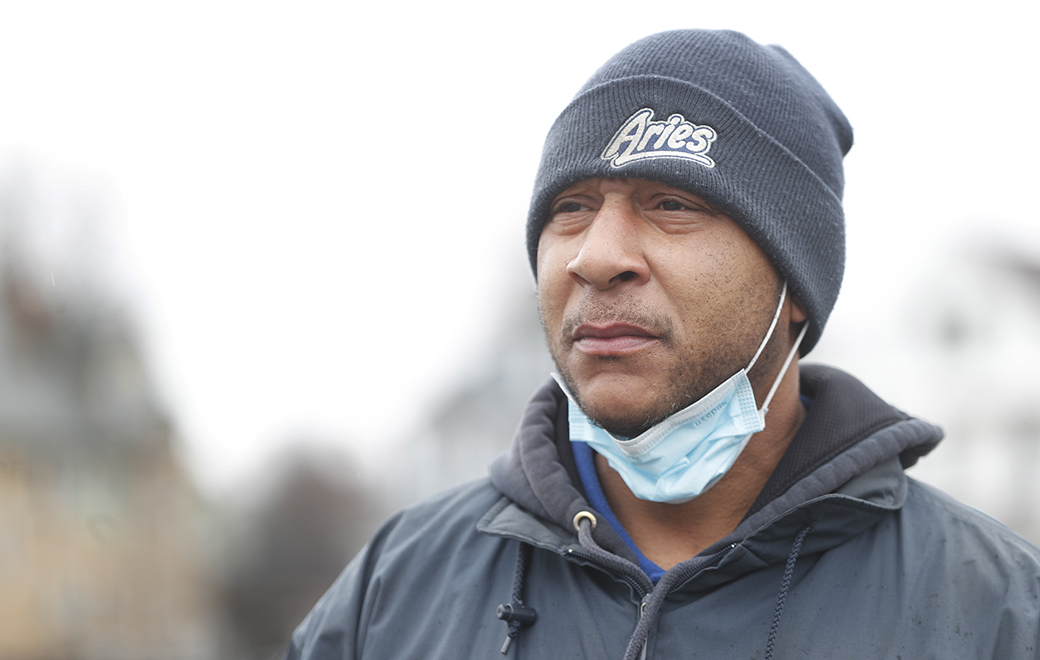 Ross Williams is a driver for Aries Transportation, which is a health and human services transportation provider and a major provider for adult day services. (Sharon Cantillon/Buffalo News)

Ross Williams is one of the few drivers still working at Aries Transportation, which provides rides for seniors in adult day services and patients who need to get to medical appointments like dialysis.

"We're only able to work part-time, maybe 20 to 25 hours a week. The pay hasn't increased, so that's kind of a hindrance," Williams said.

It's also a scary time to be going to and from hospitals. "You don't really know who you're carrying," he said.

Some of the drivers have been assigned to a Covid-19 team – they transport patients who are known to or suspected of having the coronavirus.

Williams, who has been driving for Aries for four years, isn't on that team. But that doesn't mean the patients he's helping aren't infected, he pointed out.

"A lot of drivers think it's not worth it," Williams said.

There is no way to do his work from home. "We don't have that option," he said.