Two local startups have received infusions of capital to the tune of a combined $10 million.

SparkCharge, a maker of portable electrical charging devices aimed at serving the automotive industry, closed on a $3.3 million round of seed funding, led by PJC.

Both startups are past prize winners in the 43North business plan competition. SparkCharge won the $1 million grand prize in 2018, while CleanSlate won funding in the 2015 edition.

CleanSlate had finalized the investment amount – to fuel its growth plans – before the pandemic hit, said Taylor Mann, the co-founder and CEO. The company was founded in 2014 and has operations in Buffalo and Toronto.

"We were seeing very substantial growth both inside healthcare but also in corporate environments through the end of 2019," Mann said. "That was the sort of the catalyst of this round [of funding]. Obviously it came at a good time in the sense that with our demand spiking right now, there's no way we'd be able to fulfill this without the capital."

CleanSlate's units, about the size of a desktop printer, use ultraviolet light to disinfect germ-covered mobile devices in settings that include health care, food and biotech facilities.

Mann said a large share of the new funding is going toward working capital and production, as well as expanding CleanSlate's workforce. The company had 12 employees three weeks ago. That number has grown to 26, and will be over 45 by the end of May. About 12 to 15 of those 45 people will be based in Buffalo, he said.

CleanSlate is also looking to extend its reach within healthcare and into other industries. It also is promoting a software package that verifies mobile devices are being sanitized.

The company is working to keep pace with demand for its products.

"Demand has spiked a lot faster than what we had anticipated, but thankfully we did already have the infrastructure for some of that manufacturing and supply chain already in place," Mann said.

SparkCharge, led by founder and CEO Joshua Aviv, has about 20 employees, and has leased space at the Northland manufacturing complex. Including the new funding, SparkCharge has raised $5 million since its launch in 2017. 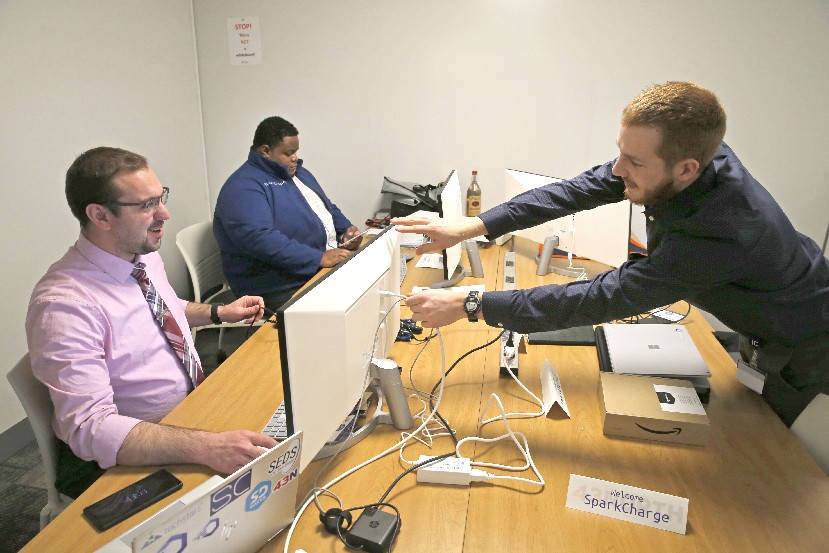 "We are using the funding to help scale manufacturing to meet the rapidly growing sales demand," said Joshua Rapoza, vice president of marketing. "We are also aggressively expanding development."

“We are very excited to invest in such a remarkable company” said Zaid Ashai, venture partner at PJC. “(Electric vehicle) sales growth is far outpacing the infrastructure growth needed to support such a thriving market. This dynamic puts SparkCharge’s innovative portable ultrafast chargers in a position to partner with new and existing businesses to cure 'range anxiety.'"

Rapoza said SparkCharge is adjusting to the times, with all of its employees working from home and meeting by video conference twice a day.

"We are also helping local hospitals by producing face masks," Rapoza said. "This not only helps our community but it helps motivate the team knowing that we are getting a chance to help in the fight."