Joseph Marquez and his mother have shared a special bond since he was born 27 years ago. Until he was hospitalized for Covid-19 on March 31, they had never been apart.

After being unable to see him for 23 agonizing days, Carol Marquez's heartache finally turned to happiness Wednesday at Kenmore Mercy Hospital. Joseph was released.

The celebratory scene, captured on video, has become a familiar one during recent weeks. As Joseph was ushered in a wheelchair through the hospital lobby, health care workers gathered to serenade him with his favorite song, "You Are My Sunshine."

“I felt like God held my son and got him home to me," said Carol Marquez, 43, who lives in the City of Tonawanda. “He is a miracle son. I could not imagine my life without him.”

Joseph is a special needs individual whose mental capacity is that of a young child, his mother said. At 6 feet tall, he weighs a little more than 300 pounds and is the oldest of five children.

He began to feel sick in late March, when he complained of being “hot and sweaty” and was coughing a lot, his mother said. She thought it was asthma-related.

“So I kept giving him breathing treatments, but I noticed he kept taking a lot of showers," she said. "With his disability, he does not know to say, ‘Mom, I have a fever.'”

Joseph had a temperature of 102.5 when his mother brought him to Kenmore Mercy. He was examined in the emergency room and then admitted to the hospital's Covid-19 Unit. Within two days, he was on a ventilator in the Intensive Care Unit. 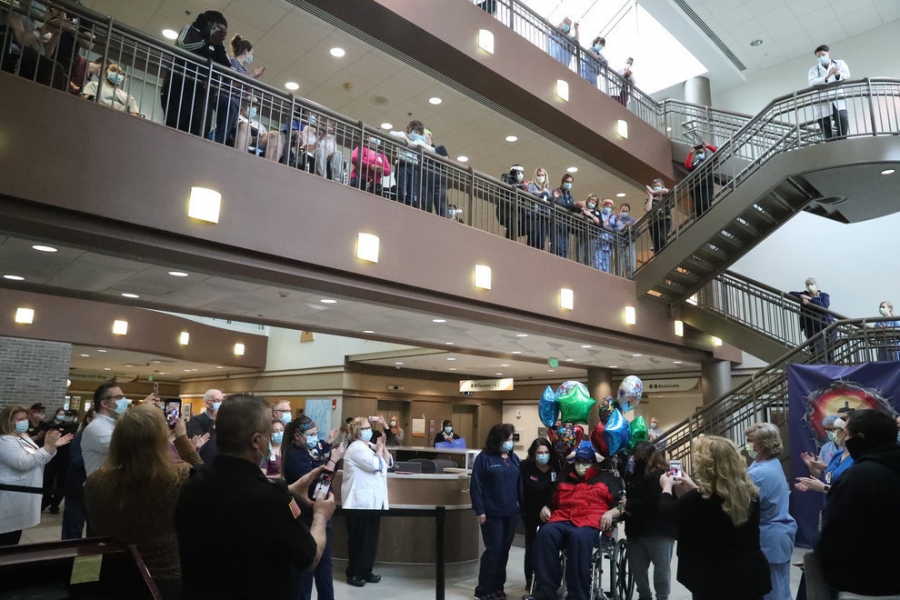 Joseph Marquez, shown in the wheelchair, had a temperature of 102.5 when his mother brought him to Kenmore Mercy Hospital on March 31. He was examined in the emergency room and then admitted to the Covid Unit. Within two days, Joseph was on a ventilator and in the ICU. Here, hospital staff celebrate his release on Wednesday. (James P. McCoy/Buffalo News)

“He came in with shortness of breath, but he went down quickly and he went down hard. It was a classic presentation of the earliest Covid patients who ended up in our ICU. I’m not sure if anyone expected him to live, he was that ill for that long a time period,” said Heather Telford, vice president of Patient Care Services and chief nursing officer.

Mary LaMartina, who was part of the team of ICU nurses who cared for Joseph, developed his care plan. She said she talked every morning on the phone with his mother.

“His mom was so upset because they had never been separated before, and my heart went out to her. ‘I know I can’t be his mom,’ I told her, but I asked her to tell me what I could do to put him at peace. I asked her to share some stories with me," LaMartina said.

Over time, LaMartina learned how to play Marco Polo with her patient. She knew his nicknames, how much he liked banana splits and how he liked to be touched.

“She told me story after story, and every time I went in there, I would rub his back or hold his hand or talk to him. I repeatedly told him his mother loved him very much. He was so critically ill, but personally I believe he could hear me,” LaMartina said.

When LaMartina discovered Joseph liked music and his favorite song was “You Are My Sunshine,” she sang it to him – and danced around his bed in full protective equipment.

“I had him for two weeks and toward the end he was making progress. I was finally able to lighten up his sedation because he could tolerate it with his breathing. His eyes opened, and for the first time he was a little coherent with me,” said LaMartina.

LaMartina’s efforts are an example of what nursing is all about, said Telford, “because whether they are sedated or in a coma, whether they are expected to come out of it or not, they wake up two weeks later and say they know your name.”

On April 12, Joseph was returned to the Covid-19 Unit, where he received medical rehabilitation including occupational and physical therapy, said Deborah Nicholas, nurse manager.

“He was our first patient who was critical early on to be successfully (removed) from a ventilator and moved out to a medical surgical floor and out the door,” said Telford. “That’s quite a success story.”

When admitted, Joseph's symptoms mirrored those of other Covid-19 patients, said Telford. He deteriorated quickly.

Because of his condition, he could not be transferred to Sisters Hospital's St. Joseph Campus, Catholic Health system's designated Covid-19 treatment facility in Cheektowaga, said Dawn Cwierley, public relations manager.

Carol Marquez, who has been laid off from her job as housekeeper at a Wheatfield nursing home, believes she may have been exposed to Covid-19, but was unable to be tested and self-quarantined for two weeks. She realizes it will be some time before their small family returns to normal.

As for Joseph, he was looking forward Wednesday to getting back to two of his favorite things, watching the movie "The Nightmare Before Christmas" and enjoying the special meal he requested.

“He asked if I could make him hot dogs when he came home,” his mother said.