ALBANY – In the immediate days and weeks after the novel coronavirus began its march across New York State and the nation, a prominent provider of community-based health, mental health and education services in the Buffalo area saw an increase in job applications from the ranks of the Covid-created newly jobless.

And then the applications largely stopped in the last couple of weeks.

The reason: A big boost in unemployment benefits, approved by the federal government and available in New York State, has caused thousands of jobless individuals to defer going back to the workplace, at least for now.

Many of these people are collecting at or above what they had earned before being laid off. Moreover, some are afraid to return to workplaces that they perceive might not be safe from the virus.

“It’s creating a lot of stress on our current workforce," said Erin Bice, vice president of human resources at Gateway Longview. Most affected: its residential facility in Williamsville for teens with various emotional or social issues.

The staff shortages are such at the facility that the group is adding incentive pay for current staff, shifting workers from other programs and desperately reaching out to former employees to get them to return temporarily.

The unemployment benefit situation has created a worrisome Catch-22 in New York and elsewhere that risks further denting efforts to get people back to work and restoration of a battered economy.

The new wrinkle is affecting sectors from the agriculture, restaurant and hospital industries to manufacturers and nonprofit entities that provide a range of social and health care services on behalf of the state.

A farmer last week said labor is growing difficult to find because jobless New Yorkers can stay home and make as much as he can pay them for a long day of planting tomatoes in the dirt on his farm.

“It’s affecting our clients in many ways. They need to get people to work," said Sarah Gilson, vice president at Remedy Intelligent Staffing, a Buffalo staffing agency that finds workers – from entry-level to engineer and management-level posts – at manufacturing companies across Western New York. Many of her clients are deemed essential services, providing food or medical products.

“They have to make these products whether or not they have the people to make them," she said of her clients.

But since the boost in unemployment benefits, something remarkable is happening. “It’s definitely more of a difficult situation to get them to even answer their phones to try to recruit them to come to work," Gilson said of workers her agency has placed before.

At issue is the large bump the federal government approved, and that New York State is offering, to add an additional $600 per week to everyone’s unemployment benefit check – on top of regular payment levels, which top out in this state at $504 weekly.

The added $600 is a lifeline for jobless Americans. At the most, it means people could be getting unemployment benefits at an annualized rate of $57,408. It’s also money government officials hope will be spent to help keep consumer spending from dropping to even lower levels.

The payment level is often at or above what many workers received before being laid off. The state Labor Department would not say Tuesday how many are getting the top benefit level.

The idea was about helping workers in an historic slumping economy. “But now we’re all hit with the problems it’s causing," said Rocco Termini, a Buffalo developer who owns four restaurants in the city.

Across the board, employers say the tough time luring unemployed workers back to jobs will last, for many, until the higher benefit level expires July 31.

While restaurant owners worry now about not having enough staff to either fill current positions, for those still open, or future slots when they restart operations, some also see another scenario in the future: so many restaurants will be financially ruined and unable to resume business that, at some point when the unemployment benefits end, there will be a huge glut of restaurant workers.

Groups like the National Federation of Independent Business, or NFIB, urged Congress last month to cap the temporary unemployment payments so that total benefits did not exceed what workers made in their jobs. That pitch went nowhere.

There’s also another problem. A new, federal Paycheck Protection Program provides funding for businesses. However, a loan under the program becomes a grant if firms use it to rehire 75% of workers laid off during the Covid-19 pandemic.

“We are worried that if workers don’t want to return because of the generous UI supplement, then employers won’t be able to meet the 75% threshold and what was essentially a grant program will unexpectedly turn into new debt," said Greg Biryla, the NFIB’s state director in New York.

There has been much research over the years on the correlation between higher unemployment benefits – and their duration – and people’s work habits, noted William Rodgers, a former chief economist at the U.S. Department of Labor in Washington. He is presently a professor with the Heldrich Center for Workforce Development at Rutgers University.

“If the benefit is higher, that tends to lead individuals to not want to work," he said.

There is also an added complication now: public health concerns, especially in high “touch-type” jobs that bring people closer together.

“People are nervous about being back in the workplace and getting sick," Rodgers said. Those worries have been exacerbated by some employers who were late in moving to embrace sanitary work environments.

Among the sectors especially affected by the unemployment benefit levels, Rodgers believes, are some lower-wage industries like retail and grocery stores.

“It’s a total balancing act," Rodgers said of governments that seek to drive more money to jobless Americans while not driving too much cash that ends up dissuading some to get back into the workforce.

For some on unemployment now, there is also a worry beyond catching Covid-19: Do they want to give up the sure-thing government employment payment to take a job at a company that might not make it through the crisis?

“Part of the problem we’re having here is we’ve had decades of UI reform proposals, but they never come to fruition for a variety of reasons," Rodgers said. Also, states have raided unemployment trust fund reserves to pay for other budget expenses, leading to problems some states now see as those funds get depleted. “We could have been much, much more prepared," he said. 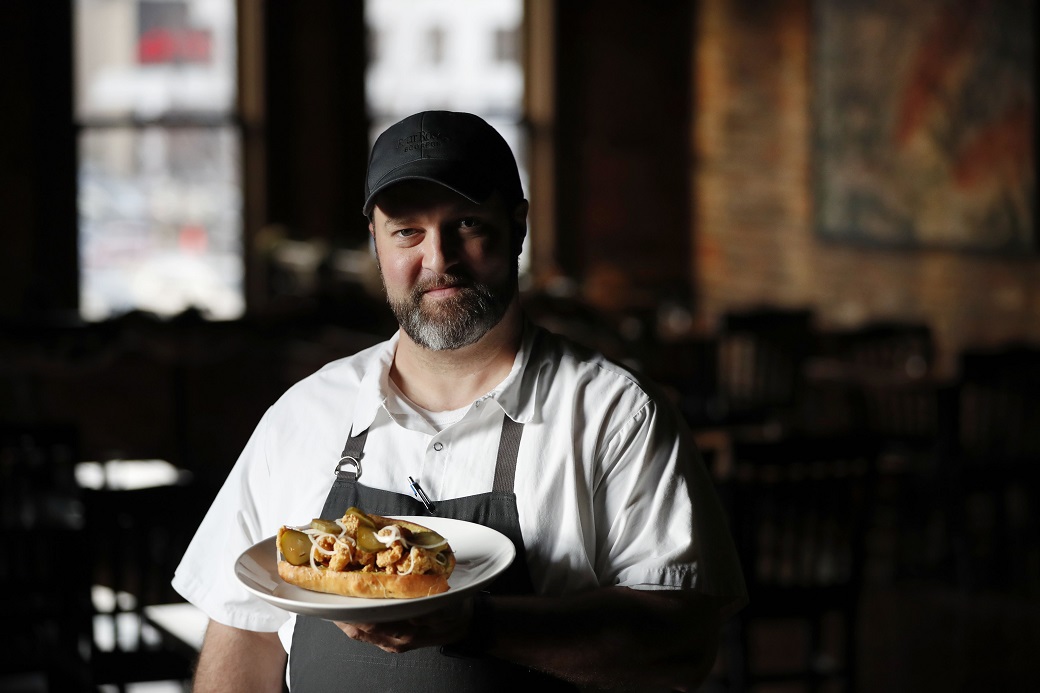 Toutant owner and chef James Roberts presents a fried shrimp po boy before the pandemic shut the restaurant. Now Roberts wonders how many workers he’ll be able to rehire when he reopens and if they’ll want to come back as long as higher unemployment benefits are being offered. (Sharon Cantillon/News file photo)

Gilson, the manufacturing staffing agency executive, noted another reason some jobless people with the new higher benefits are staying home rather than returning to work: child care. With schools closed, parents are squeezed by having to remain home to care for their children.

With jobs going unfilled, it’s causing employers to step up pitches. Gilson said her company tries to show jobless people the benefits of getting in on the ground floor with an established manufacturer. “You have to think about the long-term, getting your foot in the door," she tells potential workers.

The effects are varied. At Gateway Longview, more residential slots could be available to teens, but there isn’t the staff available to accommodate them now. Like others, the facility is pushing to do more advertising and outreach to broaden the pool of potential workers. But with unemployment benefits temporarily hiked, “We won’t have a large pool of applicants for the foreseeable future," Bice, the human resources executive, said Tuesday.

Chef James Roberts owns Toutant and Dobutsu in Buffalo; both closed under the Covid-19 weight and he laid off 90 employees. Like other restaurateurs, he’s trying to stay in touch with his laid-off staff, nearly all of whom, he believes, are on unemployment with the additional $600 benefit.

Looking to the day he reopens, he figures social distancing orders likely will require restaurants to reduce capacity. That will reduce revenues. So how can he hire back all of his workers? And if it’s before July 31, how does he lure any of those workers back who might be making more with unemployment than their old salary and tip levels?

“The reality is, as a small business, we’re already on slim margins in general. We don’t know if we’re going to make it back," he said.

“Without a doubt, it’s a serious Catch-22 situation," he said of the unemployment benefit dilemma.

Employers left 'in a pickle'

At the onset of Covid-19, the Arc Erie County, which provides a range of services for children and adults with disabilities, took a variety of steps to keep up staffing levels, including higher pay for direct care workers.

But Douglas DiGesare, the group’s CEO, said getting previously furloughed staff back was “met with some resistance” from the workers. Partly, it was the more money they were getting through unemployment. But that wasn't all.

“Child care issues and fear of the unknown are widely cited as reasons for not wanting to come back to work," he added.

He said such reactions pose a challenge for a program like the Arc. “Regrettably, we had to lay off some very good, long-standing staff who opted to remain out of work," DiGesare said Tuesday.

Dwane Hall, owner of the Sportsmens Tavern and the Cave in Buffalo, is coming off his best financial quarter after 37 years in business. Now, everything is shut down and he and his family are wondering how to maneuver the Covid-19 era and some of the unintended consequences created by programs like the unemployment insurance with its added benefit.

“We’re in a hell of a pickle," he said Tuesday. “I have a guy who cleans for me, cuts grass. I pay him $12 to $13 an hour. He’s been laid off. He’s getting the extra $600 benefit a week and he doesn’t want to come back to work. He’s telling me he doesn’t want to catch the virus. Who can blame him if the virus is still around?" said Hall, who had to lay off 24 workers in all.

If he can financially make it through the coming weeks, which remains a question, Hall believes his workers will return because of a workplace friendly to workers. “But I don’t think a lot of people are going to get their employees back," Hall said of other businesses.