There was a time when the pink flamingo was used as the mildest slur possible against the Polish Americans of Buffalo’s East Side, the Town of Cheektowaga and the villages of Sloan and Depew.

Making reference to pink flamingos with a smile included an understood wink.

First designed in 1957 by Don Featherstone and manufactured by Union Products of Leominster, Mass., the bright-colored, blow-mold birds took their place in the yards of millions of Americans in the “Happy Days” years following World War II. 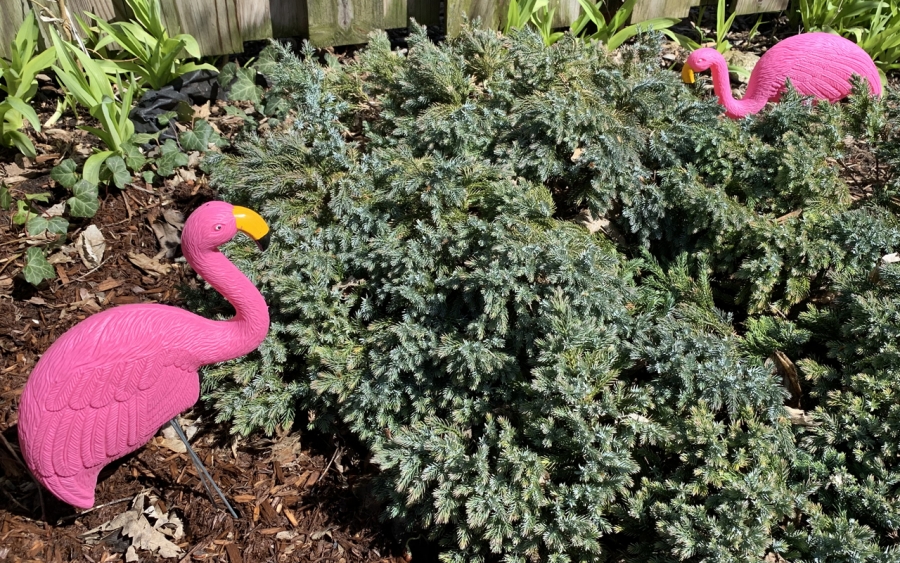 But as the fad faded elsewhere, those pairs of flamingos — one looking down, one looking straight ahead — became a fixed part of the distinct Cheektowaga version of postwar suburbia which also included screened-in garages and Virgin Mary statues. 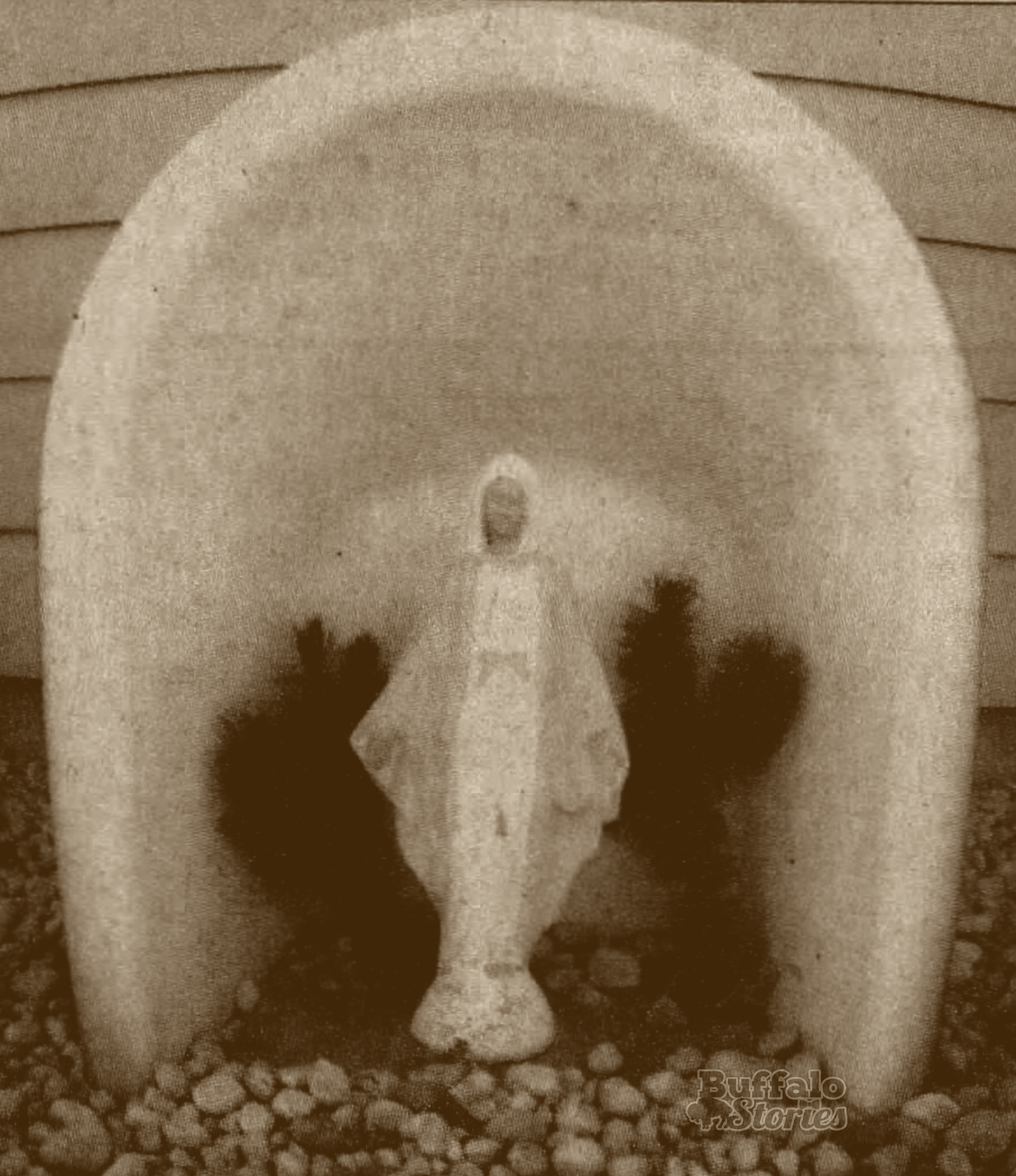 The pink flamingos remained on display the lawns in front of those well-kept Cheektowaga homes longer after the bubblegum-colored baubles were relegated to the basement or garage elsewhere on the Niagara Frontier. But even after they were still mostly gone, it was easier to poke fun at a dayglo-colored bird than it would be to joke about the far more popular Virgin Mary grottos.

The whole notion is not completely unique to Buffalo. The Mary and flamingo statuary we associate with Polonia in Western New York is associated with other immigrant populations, especially Hispanic groups, in other places around the country.

Minnesota public art expert Dr. Colleen Sheehy told the Chicago Tribune in 1990 that “yard shrines created from half-sawn bathtubs containing statues of the Blessed Virgin” that were associated with the same folks groups as flamingos, were still seen “mostly seen in old urban neighborhoods, with high concentrations of first- or second-generation ethnic populations.”

Through the '60s and '70s, pink flamingos were jeered as the height of tackiness, trash culture and bad taste.

In 1978, the president of the Cheektowaga Cultural Society begged the town board for more money for things like the symphony orchestra and other cultural exploits to help the town shed “the chintzy, pink flamingo cultural atmosphere.”

Somewhere in the mid-1980s however, as nearly every element of postwar 1950s culture got a nostalgia-filled reboot, the flamingo went along for the ride. The flock of flamingos flying through the opening credits of “Miami Vice” didn’t hurt the cause. 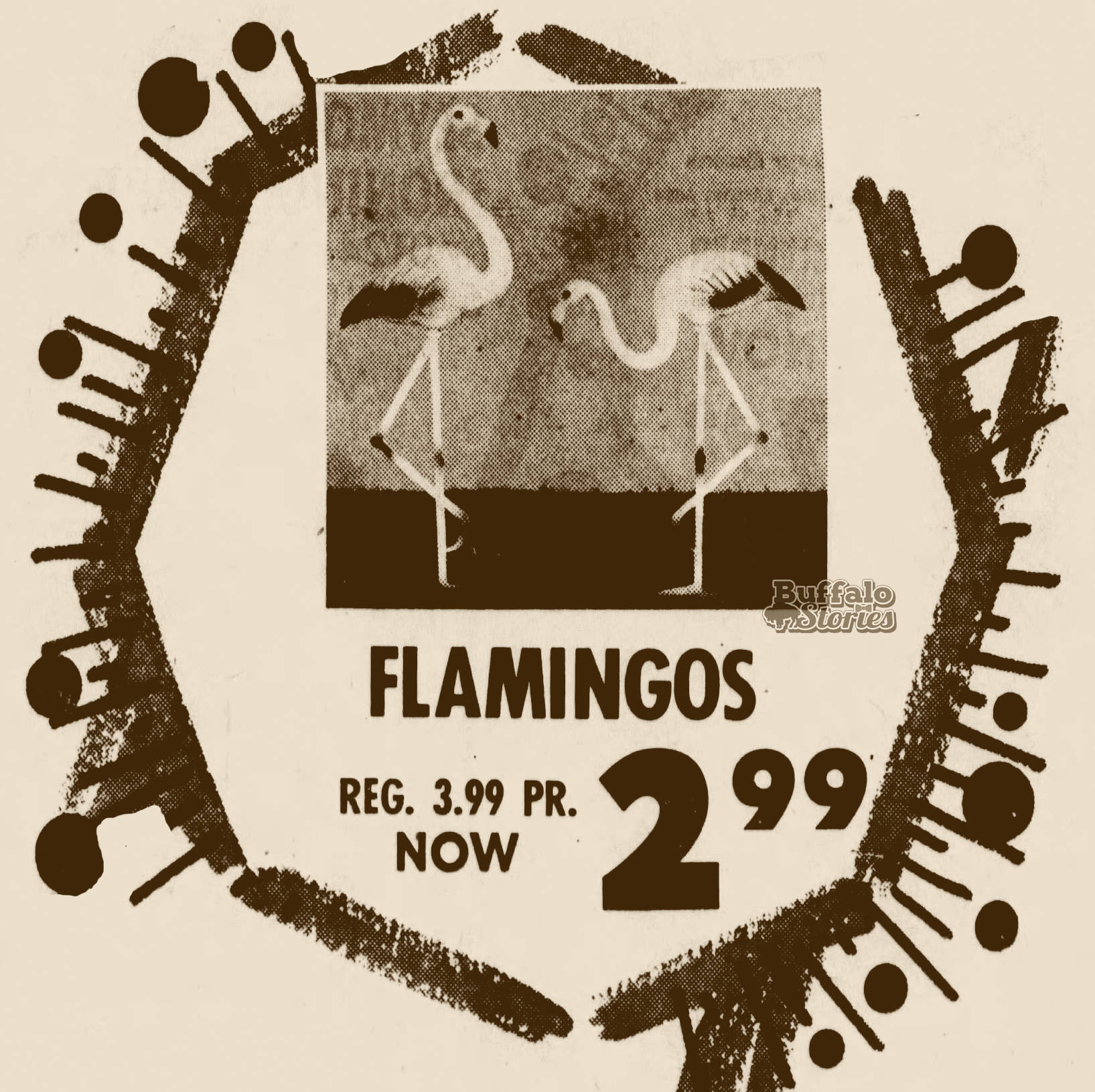 There was less mean-spirited sneering and more kitsch-filled appreciation. Even as a new generation of flamingo lovers planted their birds, there was still a divide for some. The avian ornamentations weren’t tacky so long as you were in on the joke.

The original Union Products factory was shuttered and the business closed in 2006. There was a sort of nationwide funeral for the original pink flamingo, with people all over the country offering ideas to keep the plastic pink flame lit.

Cheektowaga’s politicians offered up a tongue-in-cheek proposal to manufacture them in Buffalo’s eastern suburbs.

"It could become the town bird," joked Cheektowaga native and then-Assembly Majority Leader Paul A. Tokasz. "And you could get a tax break if you put one on your lawn."

Since their return to the good graces of America’s cultural elite, Cheektowagans aren’t alone in claiming the flamingo.

Baltimore and Parma, Ohio, have been referred to in print as the world’s “pink flamingo capital.”

Don Featherstone’s wife laughingly shared with a Madison, Wisc., reporter that someone from Buffalo claimed that Western New York was America’s pink flamingo capital, even as the reporter was making the pitch for that title for his hometown.

After years of hand-wringing over pink flamingos, then a distanced acceptance, it now looks like the Buffalo area, especially the area’s Polish neighborhoods, are wholly embracing the once-maligned symbol of their culture.

In 2012, the Cheektowaga Bee called the pink flamingo as synonymous with the town as bowling.

When the Village of Sloan made plans to build a new splash pad in the village, plans included a giant pink flamingo as a part of the design.

When a symbol for Kaisertown was needed for the public art postcard to be painted on the side of a Clinton Street building, the flamingo was the obvious choice. 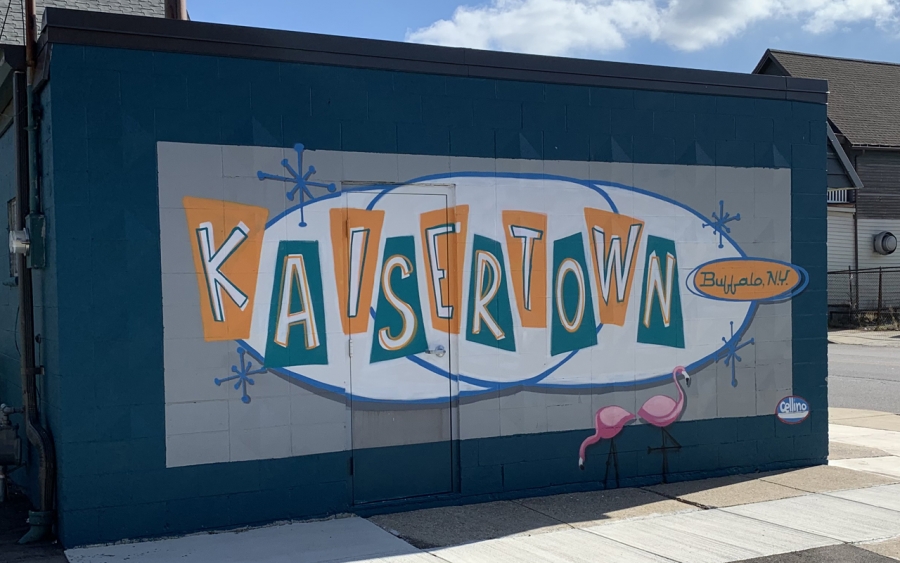 And these days Buffalo has an even better argument to call itself America’s pink flamingo capital, after the Buffalo Olmsted Parks Conservancy put on a Guinness-record winning display of 1,500 pink flamingos on Bidwell Parkway — the most ever in a single display.

No longer a slur, the pink flamingo has become an embraced icon.