Gov. Andrew M. Cuomo said Tuesday morning that he believes Erie County and its surrounding areas have reached a leveling off in the fight against the coronavirus, and he is incorporating one of Buffalo's own to oversee Western New York's "reopening."

Cuomo said he was appointing Lt. Gov. Kathy Hochul to oversee the phasing in of Buffalo's economy, which will be part of a region-by-region reopening within the state whose timing will be "data-driven."

"We’re going to make reopening decisions on a regional basis, based on that region’s facts and circumstances about the Covid virus," the governor said during his daily briefing, which was held Tuesday at the Roswell Park Comprehensive Cancer Center in downtown Buffalo.

"Just like some states will open before other states because they have a different circumstance when it comes to Covid. It’s also true across the state. ... We operate as one state, but we also have to understand variations. We'll talk about opening economies in that regional context."

Cuomo said that Hochul will "take charge" in the public health outlook of Western New York and work on the "reimagining" and restarting of the economy here.

Cuomo said that there would not be additional committees involved in the reopening process, but instead that Hochul would work with local officials. Hochul did not speak during the news conference.

The governor said the timing involving the reopening of any region would be a "data-driven" process.

"Look at data," Cuomo said. "Look at hospitalization rate, the infection rate and see where you are. ... The 'when' is data-driven. It’s not, when do you want it?" 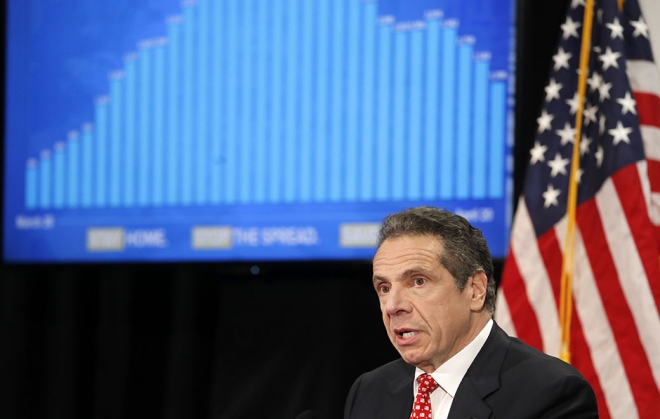 For Erie County, Cuomo cited statistics that showed the steady increase in hospitalizations during the monthlong pandemic, until a recent relative leveling off.

Cuomo said that if Western New York's numbers did not decrease, the state would provide additional resources.

"Hopefully, we are on this plateau and on the other side of the plateau is a descent, so we can manage it," the governor said of Erie County's statistics. "But if it’s not a descent, and it’s an ascent, anywhere in the state, the rest of the state will be there.

"We are one state, we are one family, we are one community, and we’re there to help one another. So whatever Erie County needs, whatever Western New York needs, you have my word that the rest of the state will be responsive."

Cuomo displayed statistics that showed the state's coronavirus cases by  percentage. New York City has 64% of the cases, followed by Long Island (21%), Westchester and Rockland counties (8%) and the remainder of the state (7%).

What to do if you think you have Covid-19
Western New York's coronavirus cases, county by county
Which Erie County ZIP codes have the most cases
Erie County cases by town, date, age, gender

Cuomo emphasized the differences throughout New York State, where the crux of the crisis has been in metropolitan New York.

"We have very different regions within New York," Cuomo said. "New York City is one of the densest places on the globe. ... In upstate New York, in some counties we have more cows than people.

The governor said 481 New Yorkers lost their lives to the coronavirus Monday, with seven of those from Erie County. The daily amount was up from Sunday's total of 478. The state's daily death toll was in the 600s and 700s last week. Cuomo also cited the relative "good news" of continuing downward trend of statewide numbers in hospitalizations and intubations.

Cuomo was scheduled to meet with President Trump at the White House at 3 p.m. Tuesday. The governor and President Trump traded barbs from afar regarding coronavirus response plans last week.

Cuomo said he would be talking with Trump about the testing process and its relation to the reopening process.

"My point of view is that the federal government has to take control of the national supply chain," the governor said.

During the news conference, Cuomo said that he should be held responsible for the state's testing procedures, but that procuring the supplies needed for testing continues to be problematic for all states.

"Where it gets hard," Cuomo said, "is where the labs that I regulate say, 'The manufacturers are the problem.' And then I call, the manufacturers say: 'I can't do it because it's an international problem.' That's where we are now."

Cuomo told a story of how he was watching a news program on television with his three daughters Monday night, and a report detailed Maryland Gov. Larry Hogan's purchasing of 500 test kits from South Korea. Hogan and his wife, Korean immigrant Yumi Hogan, negotiated their own deal with South Korea through middle-of-the-night phone calls.

"My daughter looks at me and says, 'Wow, that was really smart,' and just looks at me and doesn't say anything else. She didn't have to," Cuomo recounted. "One of my other daughters said, 'Why didn't you think of that, Dad?'

"Why didn't I think of buying tests from South Korea? It's not what states normally are responsible for. God bless Larry Hogan.

Cuomo was also asked about reports that Congress is nearing another coronavirus stimulus bill and the possibility that there is not funding for state and local governments in the newest bill. Cuomo has been critical of previous bills for not including funding for states.

"I think it’s a terrible mistake not to provide funding for the states," he said. "I get small businesses. I get airlines.

"How about police? How about fire? How about health care workers? How about teachers? We're not going to fund schools? I don’t get it. I don't get it. That’s why I’m not in Washington."

Cuomo reiterated, as he has throughout the past several weeks, that the rebuilding in the wake of the coronavirus should be a learning experience.

"We've gotten through difficult situations before – in Western New York, we went through 7 feet of snow a couple of years ago, that was fun," Cuomo deadpanned, before citing Sept. 11 and Superstorm Sandy. "We are better for that, and we are going to be the better for this. I believe that.

"It's the hard times in life that actually make you better and make you who you are, if you are intelligent enough to learn from them and to get the message from them. That's what we have to do here: What did we learn about ourselves, about the world, about the country, from this period that we're in."