Even on the best days, life is never easy for the 156 men and women who are inpatients at the Buffalo Psychiatric Center.

They are people diagnosed with serious, persistent mental health problems who don’t like changes in their daily routines.

Covid-19 has made their lives much tougher.

For now, patients at the Buffalo facility cannot have visits from friends or relatives. The two or three community outings they used to enjoy each week have been stopped. Patients' ability to go outdoors has been sharply restricted, according to people who work there.

The pandemic has also created scary and challenging times for the workers who take care of these mental patients and the developmentally disabled, some of whom need extensive, close-up care.

In state-run psychiatric centers, 193 patients and 283 employees tested positive for the virus, according to the State Office of Mental Health. As of Friday, the state had no figures for how many of those people have died.

Both agencies said they could not break down the numbers by county or by facility.

Union officials told The Buffalo News at least one patient and four employees at the Buffalo Psychiatric Center have tested positive for the virus, leading to temporary quarantines for residents on several different wards.

The people who work in psychiatric facilities and group homes worry every day about their patients, their own safety and the possibility that they may bring illness home to their families, said Stephanie McLean-Beathley, a local official of the Public Employees Federation. She said she is aware of at least three local workers diagnosed with Covid-19.

“Some of our workers take care of individuals who need help to get fed, to get washed, to go to the bathroom and get dressed and undressed,” she said. “You can’t practice social distancing when you’re doing that kind of work. Some residents get upset and act out when their routines are changed." 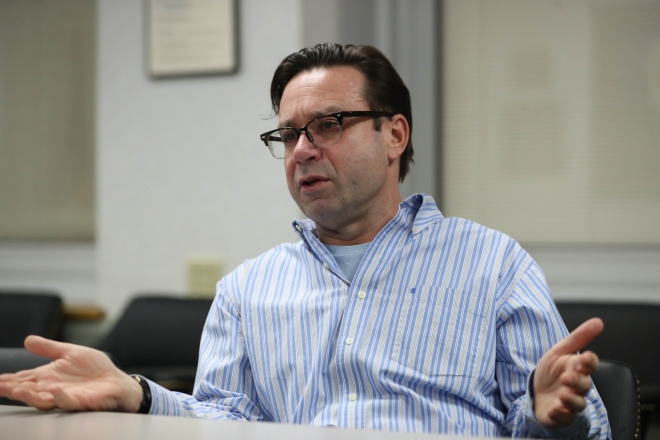 William Sutherland, 54, says he feels like a "sitting duck" at the Buffalo Psychiatric Center where he has been a patient since 2015. “If someone on my unit gets Covid-19, it’s going to spread like wildfire,” he said. (News file photo)

While state officials say they are taking steps to prevent the spread of infection, one patient told The News he feels like a “sitting duck” in the Buffalo Psychiatric Center on Forest Avenue.

“They gave us masks, but some patients wear them, some don’t. One guy wears his on the top of his head like a hat,” said William Sutherland, 54. “Most patients here understand social distancing, but some don’t. Some patients will try to hug and touch you.”

Sutherland said residents of his unit were told Wednesday night that “an employee was having some symptoms,” and nobody will be allowed to leave the unit until that employee is tested and quarantined for sufficient time.

“If someone on my unit gets Covid-19, it’s going to spread like wildfire,” said Sutherland, a patient in state psychiatric facilities for more than 20 years and in the Buffalo center since 2015.

State officials said they are following federal and state health guidelines and doing their best to address the worries of patients and workers.

Spokesman James Plastiras said the Office of Mental Health has implemented “numerous policy and procedural changes” to reduce exposure to Covid-19 for 3,490 inpatients and 14,386 employees at psychiatric centers throughout the state. Those measures include social distancing, a temporary halt to visits and providing masks to employees, Plastiras said.

Unions that represent hundreds of workers who care for individuals at psychiatric facilities or group homes in Western New York said the state needs to do a better job on worker safety.

There is a shortage of masks and other personal protective equipment, said Ove Overmyer, a Western New York spokesman for the Civil Service Employees Association, which represents many Buffalo Psychiatric Center employees.

“Some of the patients our people work with are high-risk to begin with. Now we’re also dealing with a virus that nobody really understands,” Overmyer said. “Our people are risking their own lives and the lives of their families every time they go to work.”

Officials of both unions said they have purchased hundreds of masks for local workers because the state does not have enough to go around.

Patients at many facilities, including dozens of group homes and the Western New York Childrens Psychiatric Center in West Seneca, do not wear masks, according to McLean-Beathley and other union leaders.

Others said workers have been put in danger at times because of a lack of communication.

“We’ve had several situations where a unit at the Buffalo psych center has been placed on quarantine because someone has possibly been exposed to Covid-19,” said Randi DiAntonio, a Public Employees Federation vice president. “We’ve had workers go into these units and work there for hours before someone told them it was a quarantined area.”

Frank Davison of Hamburg worries about his brother, Edward, a 62-year-old patient at the Buffalo center.

He said Edward’s family has not spoken to him in about a month because of restrictions on visitation.

“There are phones there, but we have asked him not to use the phones because of the risk of infection,” Davison said.

Sutherland said there are two phones on his unit that are shared by 26 men who live there. “I have sanitary wipes. I wipe off the phone before and after I use it, but some guys do not,” Sutherland said.

Usually, counselors at the center take patients on two or three weekly outings to parks, movies, restaurants, art galleries, baseball games and other events. “None of that is going on right now,” Sutherland said, “and we really miss it. I really miss going on walks with my dad when he visits me here.”

One person who has been keeping a close eye on the status of the mentally ill is Kenneth Houseknecht, executive director of the non-profit Mental Health Advocates of Western New York.

“These are very difficult times for all of us – in schools, businesses, every kind of institution. It’s especially hard on anyone in any kind of mental health facility or recovery program,” Houseknecht said. “No visits, no outings, no meetings – a lot of the support they usually have is gone.

“I do think people who work in the mental health field are doing all they can adapt to a world that has been turned upside-down. Some mistakes have been made, but people are making heroic efforts every single day.”