A month into the coronavirus shutdown, even billionaires Terry and Kim Pegula worry about what may happen to their businesses.

The owners of the Buffalo Bills and Sabres, two pro lacrosse teams, a minor league hockey team, various hospitality and real estate ventures – and a natural gas empire that financed it all – are navigating the simultaneous stoppage of professional sports and the collapse of oil and gas prices.

On Tuesday, the Pegulas laid off 21 people at Pegula Sports and Entertainment, the parent company of their sports and entertainment businesses; furloughed 104; and temporarily cut pay for more than three dozen executives. Last month, PSE laid off an undisclosed number of employees at its hospitality businesses with no guarantees that employees will be rehired. Amid criticism for initially not declaring that it would pay game-day workers in Buffalo and Rochester even if there were no games, PSE said March 14 that it would pay for wages lost if the pro hockey and pro lacrosse seasons were canceled.

The Pegulas are preparing for the possibility that their sports and entertainment businesses – franchises that have an outsized effect on the identity and psyche of Western New York – might never be the same. “That might mean it's smaller,” Kim Pegula, the president of PSE, told The Buffalo News. “That might mean some areas are bigger and others are smaller.”

The husband and wife owners are operating as if they won't receive any significant income from their sports and entertainment holdings for the foreseeable future. Kim Pegula says she is girding the staff for a "new normal."

"We don’t know yet what that’s going to be,” she said, “but I know it’s not going to be the same as it was in early March."

Since buying the Sabres NHL team in 2011, the Pegulas have built a sports conglomerate in Western New York. They own the National Football League’s Bills and the Bandits pro lacrosse team in Buffalo, and the Americans' minor league hockey team and Knighthawks pro lacrosse team in Rochester. Not including players, PSE-related businesses employ more than 570 people full-time, a number that swells to 3,000 if game-day employees are included. With LECOM Harborcenter and other real estate investments, the Pegulas have built part of Buffalo’s revival.

Privately owned PSE doesn’t release its finances, but the Pegulas are wealthy, coronavirus or not. Forbes magazine said Terry Pegula is the world’s 20th richest pro sports franchise controlling owner, estimating his net worth at $5 billion. Pegula made his fortune from natural gas drilling, selling a portion of his company’s assets in 2010 for $4.7 billion, funding his purchase of the Sabres and Bills. The Pegulas bought the Sabres for $165 million and then the Bills for $1.4 billion in 2014.

At his introductory news conference, Terry Pegula said he would pour an infinite amount of resources into bringing a Stanley Cup to Buffalo – "If I want to make money, I’ll drill another well," he quipped – but the natural gas business isn’t doing much for Pegula these days. His companies stopped drilling months before the pandemic because of a decrease in demand and low prices in the oil and gas industry. The price of natural gas closed Thursday at $1.69 per 1,000 cubic feet, a 21% drop since his Pennsylvania-based JKLM Energy stopped drilling in July.

Two of his holdings, GRMR Oil and Gas in Colorado and JKLM, recently instituted cost-cutting measures, including staff reductions, a company spokesperson told The News. The spokesperson wouldn't provide the number of staff cuts.

The Bills are valued at $1.9 billion, according to Forbes, but that value is locked into the organization’s assets. That doesn’t mean the Pegulas have $1.9 billion on hand.

Team owners "are affluent on paper and, by the way, less affluent on paper right now,” said David Carter, an associate professor of clinical management and organization at the University of Southern California.

The recent layoffs include three vice presidents with a combined 61 years of experience.

“Terry and I, that’s our No. 1 goal: to make sure we’re viable, sustainable,” she told The News. “And unfortunately, this pandemic hit. It has made us look back and say, ‘Hey, we’re going to have to make some changes and how do we come out of this a better organization?’ ” 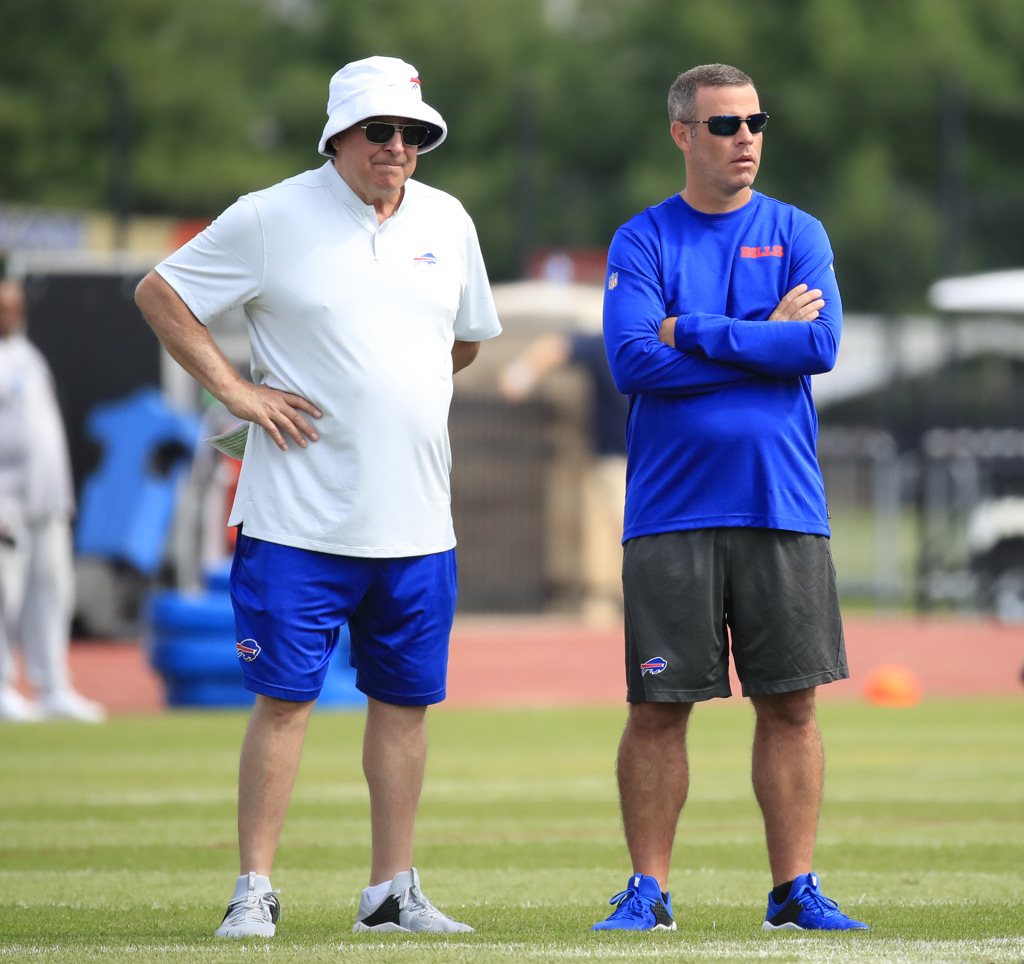 In the short term, it’s possible the only Pegula business bringing in much money is the Bills.

The NFL’s 32 teams evenly split $8.78 billion in national revenue in 2018, the Action Network reported in July, basing that figure on the $274.3 million cut reported by the league’s only publicly owned team, the Green Bay Packers.

Forbes last year pegged the Bills’ total revenue at $386 million for the 2018 season, and its operating income – the company’s profit after subtracting expenses – at $82 million. Gate receipts, including club seats, accounted for $53 million, or an average of $5.3 million per home game, including the preseason.

“Right now, cash is very important for these teams because of all their expenses,” USC’s Carter said. “You could go back and determine through collective bargaining, you can go back and work collaboratively with the players’ association and figure out a workaround for players’ salaries, but you have to think about it.

“If your expenses remain relatively steady but your revenue is cut way down then you have a real problem on your hands.”

PSE said the Bills continue to operate at “normal levels,” because the start of the NFL regular season has not been affected. The NFL draft is this week.

While Dr. Anthony Fauci, the director of the National Institute of Allergy and Infectious Diseases, said it may be possible to have pro sports resume this summer, a major caveat was doing so with no fans in the stands. Should that stretch into the fall, a reasonable assumption given that health experts do not expect a safe, effective and widely available coronavirus vaccine until 2021, the Pegulas are left to bank on NFL TV money as the lifeblood of their sports and hospitality businesses. And that’s if games are actually played.

Pilson, the former CBS Sports president, said he suspects the NFL will not begin its season as scheduled.

“What we’re looking at," Pilson said, "on top of the issues regarding the pandemic, is it looks like we’re going to get into a brawl between the president and the governors of the state of New York and California and others, who are simply going to put their bodies in front of the resumption of full-time sports activity before the health experts give you an opinion that the risks are minimal, to the point where you take some chances of serious illness. And this virus kills people, too.” 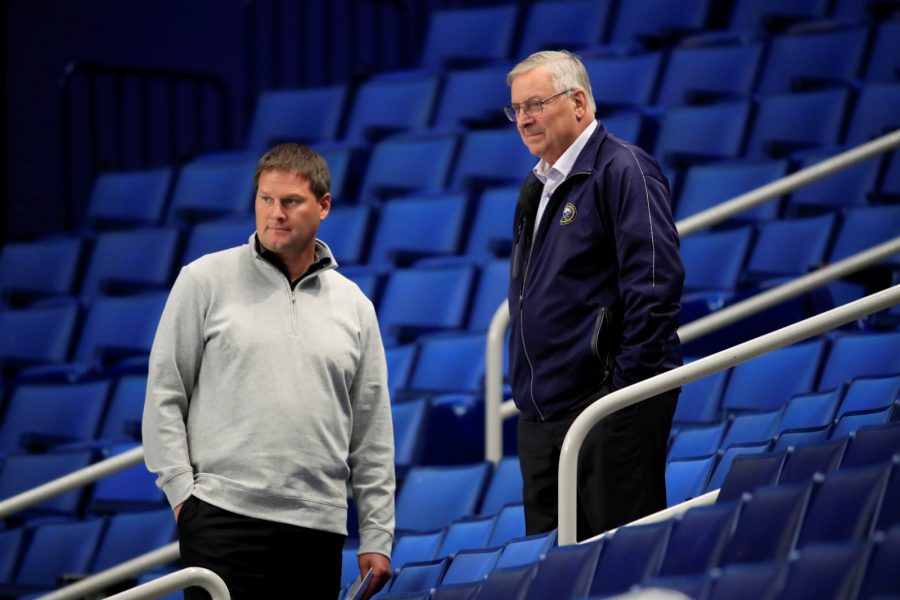 Hockey TV revenue pales in comparison with the NFL. The business of hockey revolves around the games: tickets, corporate suites, in-arena advertising, parking, concessions and merchandise sales. Projections on revenue per home game range from $1 million to $3 million depending on market size.

The Sabres have been idle since the NHL suspended its season March 12. Buffalo has 13 regular season games remaining, six of them at KeyBank Center.

The Sabres' strong television ratings – first in the league in three of the past four years – earned them a better local broadcasting deal than half the league's 30 other teams.

Television contracts include a force majeure clause in the event of a significant event beyond either sides' control. If invoked, the sides would negotiate to make each other whole. That could include an extension of broadcasting rights or added advertising opportunities. However, the force majeure clause is different in every contract.

"Force majeure is a rarely invoked clause, but there’s no more majeure time for this clause than now," said Lee Berke, the president and CEO of LHB Sports, Entertainment & Media, who helped the Yankees launch the YES Network.

If the Stanley Cup playoffs are held this summer, the Sabres and other nonplayoff teams can recoup some money through the league's revenue sharing. The more money the league makes, the more the Sabres receive.

The Sabres need it. Forbes' most recent Business of Hockey report said the Sabres made $1.9 million in operating income in 2018-19. A PSE official disputed that figure but wouldn't provide details. It's doubtful the Sabres are making money, though, because ticket revenue hasn't risen enough to offset increasing costs. The salary cap has increased by more than $22 million – from $59.4 million to $81.5 million – since Terry Pegula bought the team in February 2011. The Sabres average 17,194 tickets sold in their 19,070-seat arena, their lowest attendance since 2005-06. The team's nine-year playoff drought means the Sabres have missed out on TV and arena revenue from postseason games.

If games are played without fans, teams lose revenue from tickets, parking, concessions and broadcast rights. That would cause players' salaries to drop because the players and owners split hockey-related revenue 50-50 under the collective bargaining agreement. Changing the allocation would require cooperation between the league and the players' association.

The potential financial hit from lost television revenue is enough to entice owners to push for this season to be completed, even if games need to be played late into the summer at a neutral site.

"If you can come up with ways to at least salvage the TV revenue, if you can then restart at the end of the year and a vaccine is in place, then the relative hit from a ticket revenue standpoint is not going to be as bad as it would be if you lost an entire season," Berke said. 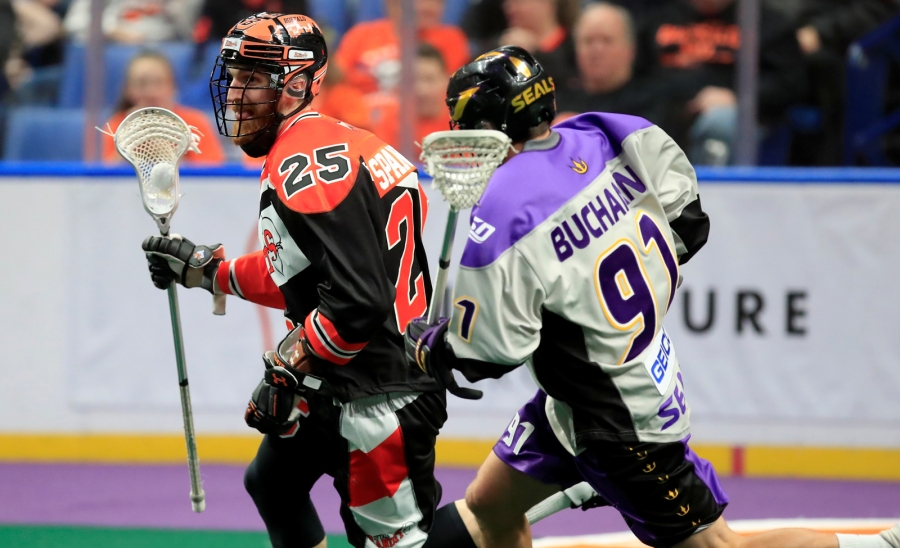 Buffalo Bandits forward Matt Spanger moves the ball against the San Diego Seals during the first half at the KeyBank Center in December. (Harry Scull Jr./News file photo)

Beyond NFL and NHL

Like the Sabres, the Amerks, Bandits and Knighthawks are dependent on turnstile count and sponsorships. There is no television revenue to fall back on.

"If you don’t have fans in the stands or arena, you lose that ticket revenue and, in turn, the sponsors are going to say, ‘Wait, nobody is seeing what I’m doing here,’ " Berke said. “Then you add to the fact the sponsors themselves – some of them are in very difficult shape.”

No fans or even social distancing mandates would also hurt PSE's five hospitality operations around Canalside, and Harborcenter, which hosts events for youth and college hockey.

Even if fans are allowed back, it's unclear how many will have money to spend.

"You have to remember our business is predicated on our fan base," Kim Pegula said. "And if our fan base doesn't have discretionary income because they’ve lost their business or lost their jobs, it's a big trickle-down effect that isn’t only affecting certain industries. ...

The biggest challenge is the unknown, Pegula said. "It’s the uncertainty that really hurts us right now.”

Jason Wolf– Jason Wolf is a sports enterprise reporter for The Buffalo News. He is a 15-time recipient of the Associated Press Sports Editors national top-10 writing award. His work also has been honored by the Society for Features Journalism and cited in The Best American Sports Writing anthology.