For the past several years, few people have more eagerly anticipated the 2020 census than Mayor Byron W. Brown.

This year's constitutionally required headcount, he has mused, might finally note for Buffalo an increase in population for the first time since 1950. It wouldn't approach that year's highest-ever mark of 580,132 people, but even the slightest uptick following decades of economic decline and population drain would bolster the city's federal aid prospects while injecting a major psychological boost as well.

But Covid-19 is casting a pall over those prospects. Just as the U.S. Census Bureau is canvassing the city and nation to determine everything from congressional representation to federal aid formulas, the deadly virus is discouraging most personal contact and the help of social groups traditionally supporting the effort.

Now Brown is urging his citizens to take another look at any census form lying on the kitchen table or forgotten in a laptop – because much is at stake.

"It would be a huge boost to the City of Buffalo's psyche," the mayor said a few days ago of a potential population increase, "but also in terms of the federal aid we would get."

Brown's staff noted that census participation increased to 38% from 25% at the start of the Covid-19 crisis. But it still lags behind the 48% noted on a national level and Erie County's 53%. It even trails the state rate of 43% that encompasses New York City, which was especially hard hit by Covid-19. The mayor aims for 75% to 80% participation in a bid to surpass the 261,310 census count of 2010.

"And I guarantee [a population hike] if every single person in every single household is counted," he said, adding that hopes for an increase in population has always relied on counting the new groups of immigrants settling various pockets of the city.

Terri Ann Lowenthal is a nationally recognized census expert based in Stamford, Conn., who once served as senior staffer to the congressional committee overseeing the census. She said the Covid-19 crisis has created an "unprecedented challenge" to an accurate census count – and at precisely the worst time.

"The Census Bureau was just launching its peak operations, and within days had to pull back from any activities involving personal contact," she said, adding that in addition to citizens reticent to open their doors to census workers, the bureau could find few staff willing to venture into the field and possible coronavirus exposure.

In addition, the effort in traditionally undercounted populations of African American, Hispanic and immigrant communities has also lacked the usual support systems. Brown noted that churches and block clubs have often helped the effort by encouraging participation, and Lowenthal calls their absence "equally consequential" to diminished door-to-door efforts that still comprise a significant portion of the count.

"A vast and unprecedented network of national, state and local organizations was going to team up when the Covid response had to end much of those plans," she said. "This massive effort in the works for years came to a halt.

"The public health crisis clearly has had an effect on this crisis," she added.

Already, Lowenthal sees alarming trends in the preliminary data after reviewing a City University of New York data bank. The North Park neighborhood has registered a healthy 54% participation rate, she said, as has Elmwood Village at 52%. But the city's bilingual census tracts on the West Side measure around 28%, which Lowenthal called part of a "historic pattern."

Brown continues to maintain that Buffalo's population was significantly undercounted 10 years ago, resulting in the loss of "hundreds of millions of dollars" in federal aid through the decade. Now, with what he calls an "obvious" impact caused by Covid-19 and its social distancing requirements, organizations such as block clubs and churches are unable to assist.

The need for participation is especially significant in communities of African Americans, Latinos and immigrants, he said, which tend to be most often underrepresented.

Darius G. Pridgen, the Common Council president who is also pastor of True Bethel Baptist Church on East Ferry Street, said many residents avoid talking to census workers in the first place, and are now wary of meeting in groups. Adding a "layer of Covid-19 concerns" only increases the reticence of some to fill out any government form, he said.

Indeed, Lowenthal noted that not only federal aid and legislative representation stems from the census, but so does money for education, health care, hospitals and public transit.

"Currently, even the distribution of disaster-related aid through FEMA is based on census data," she said.

Some Trump administration moves are helping the situation after suspending field data operations in March with an eye toward resuming in June. Now it has asked Congress for a 120-day data collection extension and delivery of redistricting data to the state by July 31, 2021.

While Pridgen might normally shout out the need for census participation from his True Bethel pulpit, he says he and other communicators must now rely on social media and other methods.

"No organization meeting with people on a consistent basis should feel exempt from getting out the word," he said.

Pridgen remains confident that even in the midst of the pandemic, Buffalo will note a slight increase in population. He points to new downtown residences drawing new city dwellers, as well as a hot housing market that might have left some properties on the auction block 10 years ago.

Still, the potential for a population hike remains complicated. Eva M. Hassett, executive director of the International Institute of Buffalo with long experience in immigration issues, noted her organization had received grants to concentrate census efforts on foreign-born populations that would send workers into bilingual communities. Much of that face-to-face effort is now sidelined.

And she noted only Buffalo's immigrant population continues to grow. Between 2000 and 2015, she said, the Buffalo metro region's native population dropped 6.1%, while its foreign-born population grew 51.1%. Total population still dropped 3.4%, but immigrants reduced the decline by 40%. 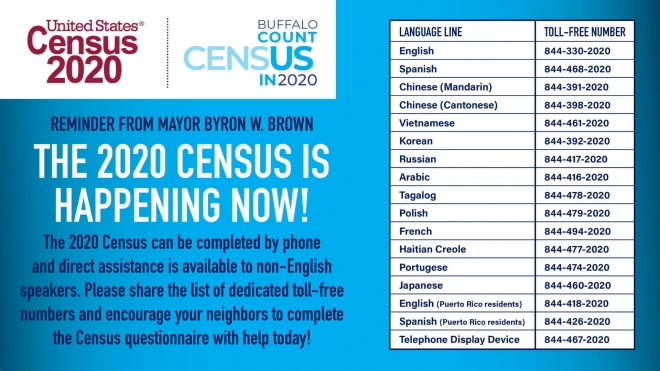 (Provided by City of Buffalo)