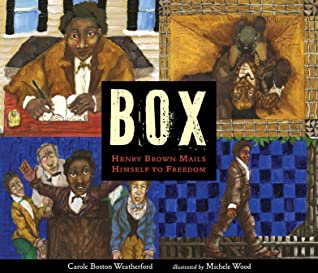 Just months after his pregnant wife and their three children were sold away from Virginia to a plantation in North Carolina in 1849, Henry Brown arranged with an accomplice to ship himself to freedom, stuffing his 200-pound frame into a wooden crate addressed to the Philadelphia headquarters of the Anti-Slavery Society. (Although the box was labeled "this side up," Brown found himself twice upside down, which nearly killed him.) He survived and published his story "The Narrative of the Life of Henry Box Brown" before fleeing America for England in 1850. He never was reunited with his family; he remarried in 1859 and did not return to the U.S. until 1875.

Using Brown's own narrative and other abolitionist texts of the period, acclaimed writer Carole Boston Weatherford paints a vivid picture of the horrors of slavery as she eloquently tells this brave man's story almost entirely in sixains, or free verse poems of six lines, inspired by the cubic structure of a box.

This poem is titled "Brutality": "Treks to market take my brother and me past plantations,/Where we encounter other blacks – some shoeless, coatless,/Nearly skin and bone in burlap shirts and threadbare pants. We share our bread and meat with them. In the slave quarter,/They recount the savage beating that many of them got/For  having been baptized just the night before." Other poems describe the greed and brutality of overseers, the harvesting of tobacco, the laws oppressing the slave (forbidden to carry canes, they must carry free papers or a slave pass; they can worship in groups only with a white preacher present), Henry's desperate efforts to keep his family together and his anguish at being torn from his dear Nancy and their children.

Gifted artist Michele Wood's gorgeous collage illustrations, using rich tones of blue, green, pink, red and neutrals, perfectly complement Weatherford's eloquent verse, whether a soulful one of Nat Turner, against a black background framing an eclipse of the moon, or one of Henry as a boy against a plantation field quilted in white crosses, or Henry and Nancy silhouetted against a blossoming tree, Henry gripping Nancy's hand as his family is taken away. ("For one last glimpse of my loved ones, I watch/The slave chain pass/bound for North Carolina./Father! Father! my child yells from a wagon./I see my wife, grab her hand, and walk four miles with her. We shall meet in Heaven, I whisper. Then she is gone./Lord, what more have I to lose?" 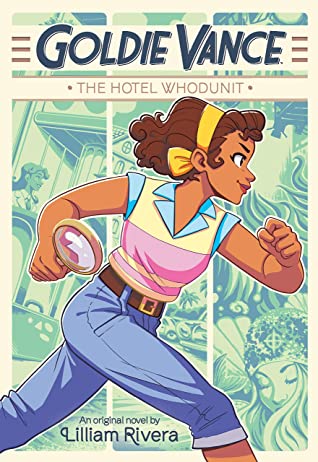 This hugely entertaining mystery stars the intrepid, irresistible teen detective Marigold "Goldie" Vance character from the comics by Hope Larson and Brittney Williams. (Two full-color mini-comics are included as part of the narrative.)

16-year-old Goldie is curious and clever and dreams of becoming a world-class detective. She lives with her dad at the Crossed Palms Resort Hotel in Florida, where she works as a valet and as an assistant to Walter Tooey, the hotel detective. Her mother works at the nearby Mermaid Club.

Goldie gets around on her trusty bicycle, unless she's in a rush when she may need to "borrow" a hotel guest's car. Her best friend, Cheryl Lebeaux, is the hotel activities director. (A sample of Goldie's narrative voice: "Cheryl... is by far the smartest girl I know. She wants to be an astronaut, that's how smart she is. Who else would read a five-pound science book for fun?")

The resort is in an uproar, hosting the filming of a monster movie featuring mermaids and sea creatures, and Goldie has to keep quiet about the fact that world-famous actress Delphine Lucerne is starring in the film. Not only that, Delphine's costume includes a "Bejeweled Aqua Chapeau," a bathing cap studded with $1 million in diamonds. The cap mysteriously will not stay on Delphine's head; when it disappears, Goldie must follow the trail of clues to find the thief. Rivera offers entertaining action, an interesting plot and lots of laughs in Goldie's hilarious narrative voice along with a sense of nostalgia for old-time Hollywood in this giddy romp.