The U.S.-Canadian border is many things: vast, open, porous. The longest in the world. It’s all true.

And now, so is this: It’s ghostly.

One minute before midnight on March 20, the 5,525-mile border between the United States and Canada largely shut down. It was a joint response by both nations to the Covid-19 pandemic. To quell the spread of the virus itself, north-south flow at the border needed to be slowed. The two countries agreed to limit passenger traffic to essential travelers only, while keeping commercial shipments on trucks and trains largely open.

The result? Movement at the border is subdued — and seems unlikely to change anytime soon.

“Eerie quiet” are Kenneth N. Bieger's words for it. The CEO of the Niagara Falls Bridge Commission saw early-April auto traffic plunge by 97% from one year ago at the three border crossings he oversees in Lewiston and Niagara Falls.

“Surreal” is Ron Rienas’ descriptor. He looks at the Peace Bridge in Buffalo and Fort Erie, Ont., where he is general manager, and sees car traffic virtually gone. In the first eight days of April, auto crossings dropped nearly 94% from one year ago.

“It is surreal to see such little traffic,” said Rienas, who leads the Buffalo & Fort Erie Public Bridge Authority. “Much worse than 9/11, when we had a dramatic decline for a few days but then it bounced back. We are now into three weeks and no indication when it will get back to normal.”

That was the expected part.

When the United States and Canadian governments decided to limit cross-border passenger travel to essential workers, it was obvious that auto numbers would drop and bus counts would near zero. If you’re a doctor or nurse living in one country and working in the other, you can still go back and forth. But if you’re a hockey fan or a shopper or a would-be vacationer looking to hop on a flight in the other country, you can’t get in. Nor would you likely try, since hockey is paused, stores are shuttered, and you’re supposed to stay home.

This isn’t a surprise. But trade is still open, and commercial trucks are allowed to cross. Still, those numbers are down, too. The Lewiston-Queenston Bridge has seen a 28% drop in truck traffic from early April 2019 to now. The Peace Bridge has a nearly 23% decline.

“With the closure to nonessential travelers, we expected a dramatic decrease in our auto and bus traffic, and we expected a drop in commercial truck traffic in the range of 8% to 10%,” Bieger said of the Lewistown-Queenston Bridge. “We did not anticipate the commercial truck traffic to drop by 25% to 28%. The recent unprecedented unemployment numbers that we are seeing has had a direct negative effect on the supply chain.”

Bieger added that he is confident truck traffic will rebound when the border reopens to nonessential traffic and people go back to work, but “it may lag in the first few months until we begin to return to life as we know it.”

Until then, the effects are stark and long — and they reach far beyond light-to-empty bridge lanes.

On the other side of the state, Janet McFetridge sees the effects of the border shutdown every day. Or more precisely, she doesn’t see them because there’s little to see. McFetridge is the mayor of the small Village of Champlain, in the northeastern corner of the state, where New York meets Quebec. Six days a week for most of the last three years, McFetridge has spent her afternoons sitting in her minivan at the end of Roxham Road, a nondescript country street that bisects the U.S.-Canadian border. 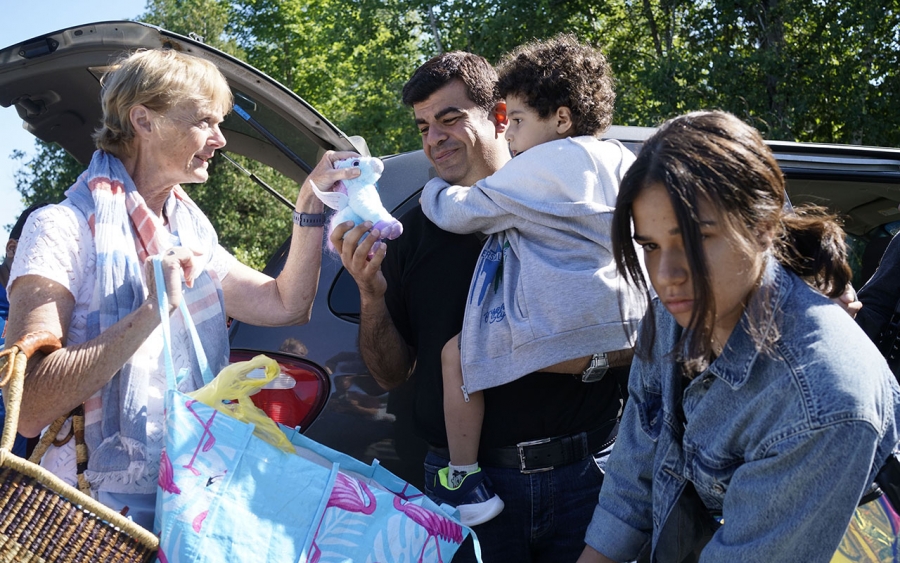 Janet McFetridge gives stuffed animals and snacks to a Palestinian family from Gaza in late November as they collect their belongings from the back of a taxi at the end of Roxham Road. (Derek Gee/Buffalo News)

Since 2017, thousands of asylum-seekers from around the world have traveled to nearby Plattsburgh, most often on a Greyhound bus or Amtrak train from New York City, then taken a 40-minute taxi ride to the end of Roxham Road, where they crossed by foot into Canada. Before they left the United States, McFetridge would offer them snacks in warm weather, hats or mittens in cold, and well-wishes year-round.

Once they were north of the border, they were arrested for crossing outside of a port of entry, but then made an asylum claim that typically resulted in them being able to build a case in the Canadian immigration system – which is what they wanted.

But now they’re not coming.

“I feel like there’s nothing I can do,” McFetridge said by phone on a recent morning. She was heading to Roxham that afternoon, but suspected she would be picking up litter, not seeing anybody. That turned out to be true: McFetridge texted later in the day to confirm that no asylum-seekers were present. No American officers were onsite, and not even the Canadian officers stationed inside a building on the northern side of the border came out to chat.

It was clear nobody was coming. Greyhound had already shut down its bus route to Plattsburgh. Amtrak wasn’t running the train line, which, when most of North America isn't sheltering from a virus, routes through Plattsburgh north to Montreal. There was virtually no way for asylum seekers to make it to Roxham,

“The reality is nobody is showing up at the border anymore,” said Craig Damian Smith, associate director of the global migration lab at the University of Toronto's Munk School of Global Affairs & Public Policy, who studies the situation at Roxham Road. “Nobody can get there.”

Can they really search my phone? Answering your border questions
Before and after crossing, seeking refuge in Canada is a long journey
At Roxham Road, refugees find a loophole and safe passage to Canada
You're likely part of the 99%. Border agents get one chance to be sure.
At the U.S.-Canadian border, relative calm belies a critical mission

Even if they did, it wouldn’t work out. As part of the U.S.-Canadian effort to fight the pandemic, both countries agreed that if a person crosses the border between a port of entry – that’s called “illegally” in American terms, and often deemed “irregularly” in the more-polite Canadian parlance – they can be returned to the first country. But last week, a Canada Border Services Agency official told The News that between March 21 and April 2, only four asylum seekers “were intercepted between ports of entry and were directed back to the United States.”

Since 2017, more than 50,000 asylum seekers have crossed irregularly – or illegally – into Quebec, mostly at Roxham Road. That's hundreds a week. Now it’s less than one a week. When asked to clarify whether that figure of four people was for Quebec specifically – where Roxham is located – or all of Canada, a spokesman wrote back, “I can confirm that figure is for all of Canada.”

That also confirms that the reality here at the Western New York-Canada border is the dynamic straight across the line: Our border is eerily, surreally quiet.

Still, both civilians and law enforcement alike are on guard.

Lighter traffic, but highly on guard

In the region around Roxham Road, where New York’s remote North Country meets the southernmost part of Quebec – a short drive from Montreal – people on both sides of the border are aware that irregular crossings may still happen. But instead of taking place in the open area at the end of Roxham Road, more people may be trying to slip through the dense woods.

“One of our immediate concerns was just the uptick in people taking lots of risks trying to get across the border and then human traffickers getting involved,” said Wendy Ayotte, co-founder of the Quebec-based group Bridges Not Borders, which supports asylum seekers. “Obviously so many people are already operating scams of one sort or another trying to take advantage of the pandemic. Human traffickers are certainly going to be doing that as well.”

In late March, the Trump administration briefly considered sending 1,000 troops to the northern border to help prevent people from entering the United States illegally. The plan was dropped after Canadian officials objected, as did some American politicians, including Rep. Brian Higgins, D-Buffalo. In a March 26 story in The News, Higgins called the plan "a waste of valuable military resources during a public health crisis, and a totally unnecessary aggressive front on the border we share with America’s greatest ally."

Vehicles arriving in the United States wait for customs at the Lewiston-Queenston Bridge in 2019. (Derek Gee/News file photo)

At Western New York's four passenger ports of entry – the Lewiston-Queenston, Whirlpool, Rainbow and Peace bridges – little has changed on the surface. CBP officers are screening travelers as they always have; there are simply fewer of them. If an in-bound traveler seems to exhibit symptoms of illness, there's an already-existing protocol for referring that person to emergency medical personnel or Centers for Disease Control and Prevention professionals.

“We really make sure there’s extra equipment out for those officers so they have a fresh supply and they’re never looking for anything they may need,” said Supervisory CBP Officer Michael Taylor, referring to personal protective equipment. “It’s always there for them.”

At the same time, CBP officers, along with Homeland Security Investigations and other intelligence and law enforcement personnel, are on a heightened lookout for pandemic-related contraband. “A crisis makes opportunity for bad actors,” said Kevin Kelly, special agent in charge of HSI’s Buffalo Field Office.

That includes transnational criminal organizations dealing in drugs and in counterfeits. “The drug dealers will up their game because you have more people sheltered in place, so more people may want narcotics,” Kelly said. “It’s like anything: If there’s a demand, there’s a supply.”

[RELATED: Pandemic or not, the criminals are out there]

The high demand right now for Covid-19 tests and medical-grade masks, suits and other equipment invites a market for fake versions of those items. Counterfeiters may manufacture cheaply made masks that look like medical-grade N95s, but don't actually meet the specifications, for example, or Covid-19 tests that look like the real thing but aren't. They will try to crack into the U.S. supply chain with those items at a high mark-up to make a quick, illicit profit.

“When you have counterfeit goods coming into your supply chain, it only hinders the response to Covid,” Kelly said. “It's our job to go after those bad actors that are infiltrating the supply chain from other countries.”

Kelly declined to offer specifics on the strategy behind those efforts, but said HSI is taking “a more guarded and strategic posture” and working closely with other federal law-enforcement agencies.

“We’ve strategically countered our stance,” Kelly said. “We're deployed tactically now. We're not shut down. The border is still vulnerable and we still have a job to do.”