Paul Brown said he probably was more nervous renewing his vows Saturday afternoon than he was the first time he and the former Judy Heron pledged their lives to one another 50 years ago.

This time he was 20 feet off the ground in a Warsaw Fire Department aerial ladder truck, and his bride was on the other side of the second story window inside the Wyoming County Community Health System's skilled nursing facility in Warsaw.

"It just brought back memories of that day, when we started our lives together," Brown said.

The couple met as teenagers when both were members of youth groups at different churches. They dated for two years before they married April 11, 1970, in West Middlebury Baptist Church in East Bethany. They went to Washington, D.C., and Myrtle Beach, S.C., for their honeymoon and settled in the Village of Wyoming.

He worked 40 years hauling propane for Griffith Energy Corp., she was a homemaker, and together they raised three sons, Brian, Larry and Brett. The couple, now both 69, have five grandchildren.

Judy Brown has been in rehab at the skilled nursing facility since December, trying to recover from complications from a knee replacement in October, her husband said. They had not made any plans for their wedding anniversary, but the nursing home had an idea, and it came from the Warsaw Fire Department.

"It's just an honor to be there and to be part of this," said Fire Chief Joe Cummins.

"We decided that they would go outside Judy's room, they would lift Paul up to her window," said Susan Winiecki, activities director for the health system. "It was really cool. It made us all feel really good." 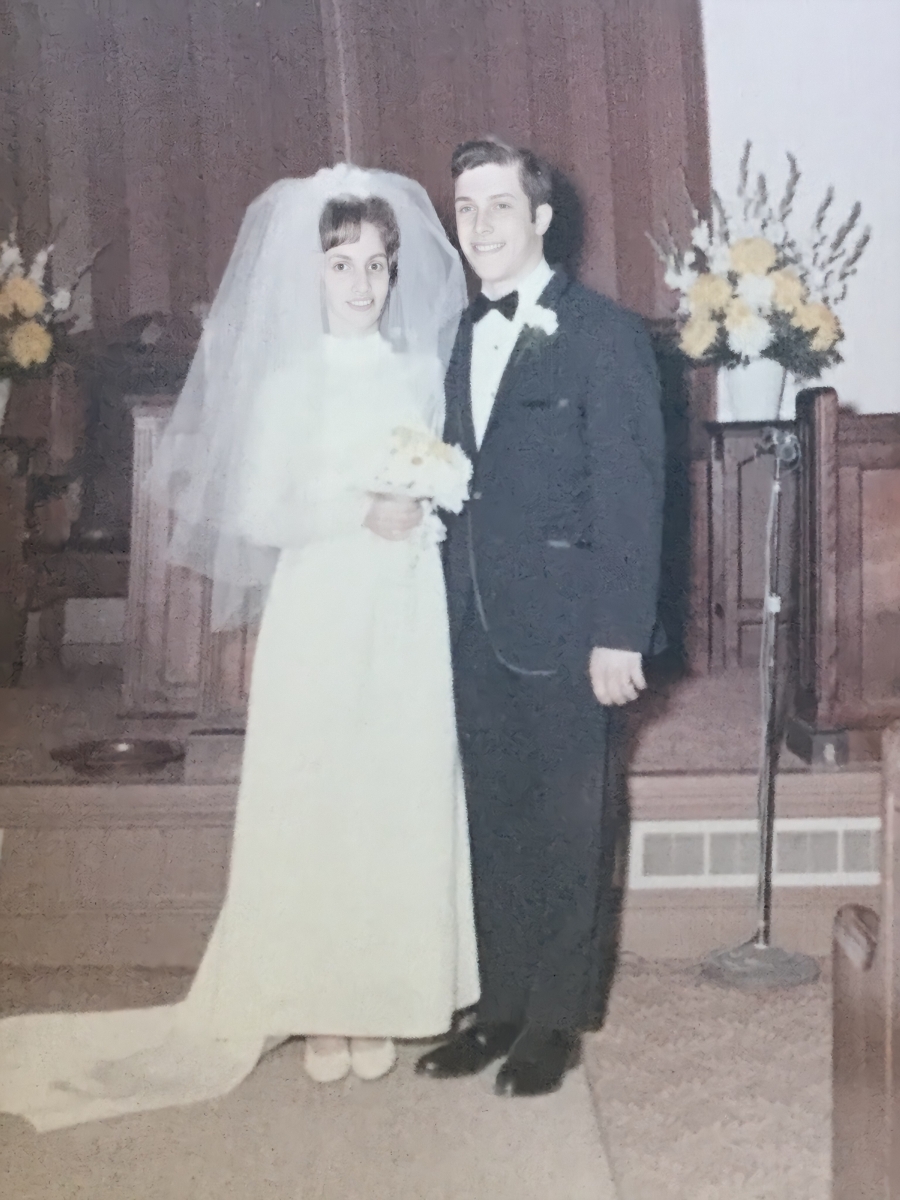 Judy and Paul Brown on their wedding day, April 11, 1970. (Photo courtesy of the Brown family)

Judy Brown wore the veil she had worn 50 years ago, and Paul had sent her a dozen yellow roses and white daisies, the same flowers she carried down the aisle. The window was open a few inches so they could hear each other.

Paul Brown, wearing a black suit, read her the vows they had made at their wedding. The wedding had been taped, and he transcribed the vows. He called down to his sons and grandchildren, who were gathered below the ladder, and said, "She said 'I do.' "

It's a difficult time for everyone, but Brown is appreciative of the nursing home for reaching out, and the fire department for stepping up. It was the first time he was able to see his wife in four weeks, because visitors are banned to try to stem the spread of the new coronavirus.

"I wished I could have reached out and touched her and give her a kiss," Brown said.

He said there are residents in the nursing home who have Covid-19, and the facility is working hard for residents. His wife's roommate recently had a birthday and her family waved to her from the parking lot, he said.

"That’s the world that we live in, right now, anyway. Nothing much we can do about it, so we just make the best of it as we can. That’s why what the nursing home and fire department did today was very special for us," Brown said. "The nursing home has gone through some very difficult days, some heartbreaking days, and for them to make this kind of effort I think is very heartwarming, very kind and generous of them."

They even made a small cake for the couple. Judy got half, and Paul got half, and the memories of an unforgettable wedding anniversary.