With buds popping on trees, lawn mowers roaring back to life, darkness coming later and later and snow in the weather forecast for – fingers crossed – the last time for months, the signs of spring are showing themselves.

In Western New York, that usually means family gatherings to commemorate religious and secular traditions are coming as well.

But as with everything, this year is different.

People are buying eggs, but not to color. People are buying chocolate, just not nearly as much and rarely in person. You can't go to Easter Mass, but you can stream it. You can go to the Broadway Market, but the crowds won't be there. And Dyngus Day is still Monday, but the celebration will have to wait.

The social upheaval of Covid-19 placed tradition and reality on a collision course this year, said David Schmid, an associate professor of English at the University at Buffalo who studies popular culture.

“You have to balance that need for tradition against the fact ... if you have these large gatherings, you’ll be putting yourself at risk,” he said.

Hence the disappearance of one of the signature moments of the religious year: the church full to overflowing on Easter Sunday morning. This year, the pews will be empty on the holiest of Christian holy days, but church leaders hope the flock will take to their screens instead.

A national survey reports that nearly a quarter of people will watch Easter church services on television, said Jill Gonzalez, an analyst for WalletHub, a personal finance website launched in 2013. The survey of more than 400 respondents was conducted by WalletHub from March 25-31. 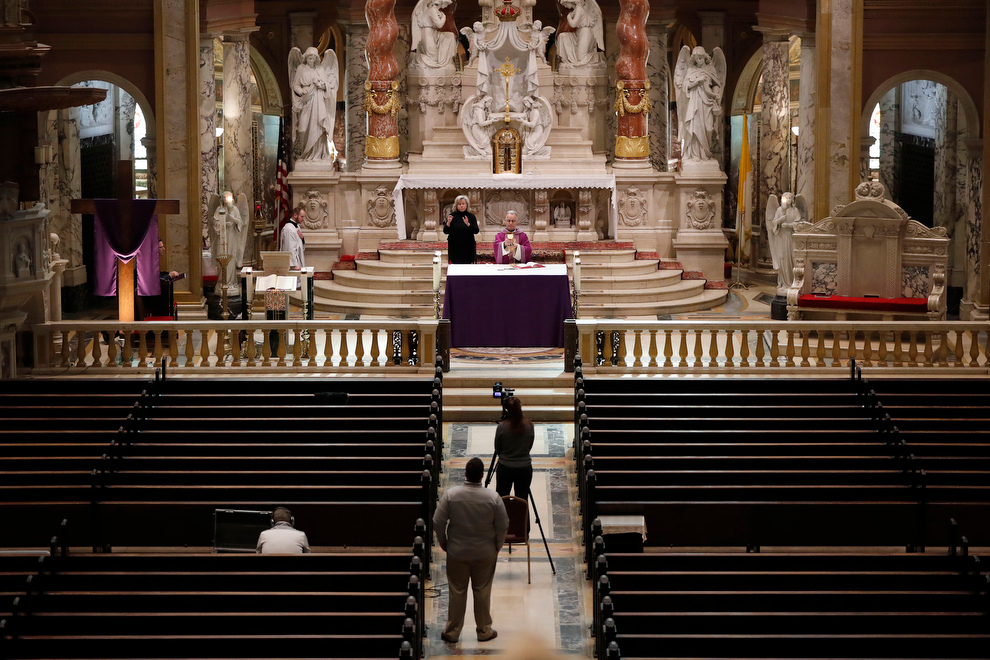 Church-goers will have to make do with congregating by computer on Easter Sunday. Here, the Rev. David LiPuma presides during the taping of a Sunday Mass in March at Our Lady of Victory Basilica in Lackawanna Wednesday. (Mark Mulville/Buffalo News)

The Rev. Ross M. Syracuse, pastor of St. Francis of Assisi Church in Hamburg, live-streams Masses daily, and also planned the same for services later this Holy Week. Syracuse, like other pastors in the Diocese of Buffalo who stream services, planned to offer drive-through blessings of Easter baskets, a Holy Saturday tradition among some Catholic families. But the diocese, pointing to social distancing guidelines, recently stated it was not allowed, Syracuse posted on his website.

Still, Syracuse stays in touch with his parishioners.

“I have a laptop in front of the altar and am able to see people ‘checking in’ during Masses,” he said. “At the sign of peace, when I say, ‘Peace be with you,’ a number of those watching send the response, ‘And with your spirit.’”

On the less religious end of the spectrum, the tradition of Easter Egg hunts is largely a matter of "wait 'til next year," but egg farmers say that dark cloud is obscuring a silver lining.

“Shoppers have bought a lot more eggs to prepare for spending more time at home,” Payne said. “This unanticipated demand has surpassed what we would expect to see during the peak of Easter shopping. To respond, egg farmers like us have expanded our supply of eggs by transitioning eggs that normally would go to restaurants and hotels to our grocery partners.”

Where there are eggs at this time of year, chocolate often follows. But WalletHub found that the candy industry is taking a big hit “as 42% of Easter celebrants who normally purchase candy say they will not do so this year.”

“We’re busy enough, but not as busy as we would normally be by a long shot," said Ted Marks, president of Fowler’s Chocolates. "We probably were doing 20% of sales that we usually do at Easter."

Online sales are another story, with orders quadrupled over previous Easters, said Marks, who attributed the surge to an email sent to the company's 20,000 subscribers.

“Basically I thanked them for their orders and their patience. It seemed to have generated some good will because the orders flew in since,” said Marx. “I hope people are getting what they want and are having some normalcy in their Easter celebrations.

Phil Buffamonte of Parkside Candy said his in-store business is about 25% of normal Easter sales.

The Broadway Market is normally much busier at this time of year. (John Hickey/Buffalo News)

A lot of that chocolate – not to mention sausage and ham and flowers and, of course, butter lambs – would have been purchased at the Broadway Market. But the most Buffalo of Buffalo Easter traditions is a victim of social distancing mandates keeping the crowds away.

As some holiday traditions falter, at least one will return with a vengeance, vowed the founder of Buffalo’s Dyngus Day parade, celebrated by Polish-Americans on the day after Easter to honor their culture and heritage.

“Dyngus Day is not just a day, it’s a state of mind, said Eddy Dobosiewicz. “When the coast is clear, we are going to have a Dyngus Day celebration like we have never seen. It will be historic."

Covid-19 is ecumenical in its assault on cultural and religious tradition. Jewish people this week were forced to forgo Seder, the ritual dinner on Passover, which coincides with Holy Thursday in the Christian faith. Andre Toth, a semi-retired clinical social worker who practices in Williamsville, said it's not easy, but it had to be done.

“On one hand, I like to observe a tradition," he said. "On the other hand, I also like to live."