Pilates trainer Sarah DiVincenzo and her husband, Mark, one of the top artists in Buffalo, opened a joint studio three years ago above a West Side coffee shop.

Rachael Jarosz and Giavana de Zitter opened their third Barre Centric group fitness studio in the region the year after that.

All four small business owners flourished in a climate where face-to-face relationships in locally owned ventures became the backbone of the Buffalo economic resurgence.

“It’s very scary,” Sarah DiVincenzo said. “That’s why I’m just working really hard to try to keep our business up and running because you could just sink so fast.”

Those in the fitness trades – like others in business around the world – felt blindsided by the speed with which the novel coronavirus changed their lives and financial fortunes. They are learning to adjust, grateful for understanding customers and frightened by the prospect of how long it will take to right their bottom lines.

They also understand the importance of health and fitness these days.

“When you’re exercising, you can kind of get out of the news and get out of the world and get into yourself,” DiVincenzo  said. “I feel like we have something that’s maintaining wellness and helping people cope with the stress of all this.”

Gov. Andrew M. Cuomo ordered gyms and fitness centers to close March 16, as the pandemic began to take hold statewide. Here’s a glimpse of the impact on two studios. 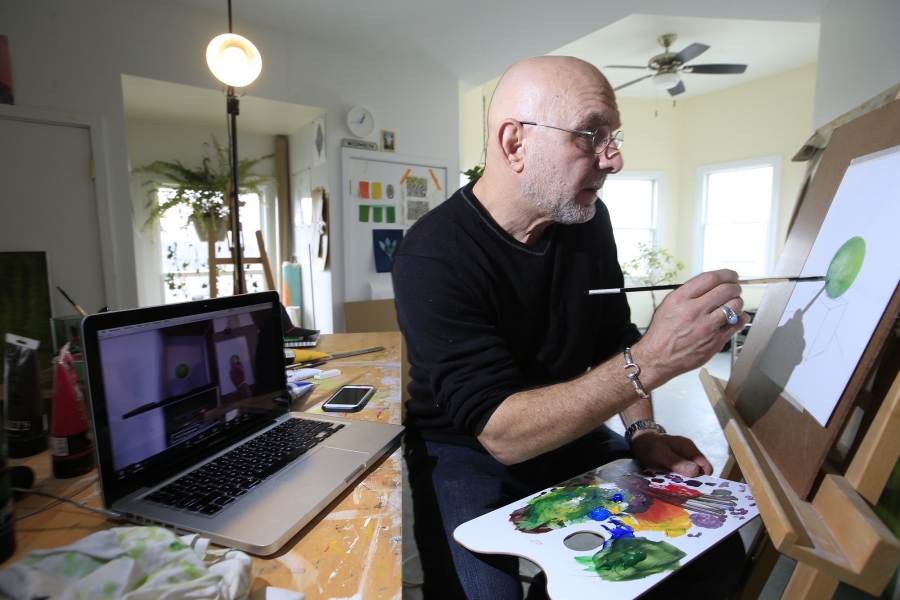 The DiVincenzos met a dozen years ago, while Sarah leased space in a Williamsville studio. Her now-husband – known across the Northeast for his paintings, and across the region for restoring large artworks, including at Our Lady of Victory National Shrine and Basilica, Hotel@Lafayette and the JCC Holland Family Building – was one of her clients.

The couple married four years ago and have a son, Gianluca, almost 5. They’ve settled into a cozy urban life in recent years and lease the upper floors of the Flagship Building at Five Points, a triangular-shaped landmark on Rhode Island Street.

They named their business Pilates Art Studio (pilatesartstudio.com), a space where the interior walls are punctuated with window’s and Mark DiVincenzo’s artwork.

His wife works with clients one-on-one or in small group classes on three Pilates reformers in her second-floor studio, mostly early morning into mid-afternoon.

Her husband paints and teaches from mid-afternoon into the evening in an art studio upstairs.

They take turns picking up their son from school and caring for him.

Clients understood the reasons for closing public gathering places, Sarah DiVincenzo said, but rued the thought of losing something that had become so central to their overall health and weekly routine. 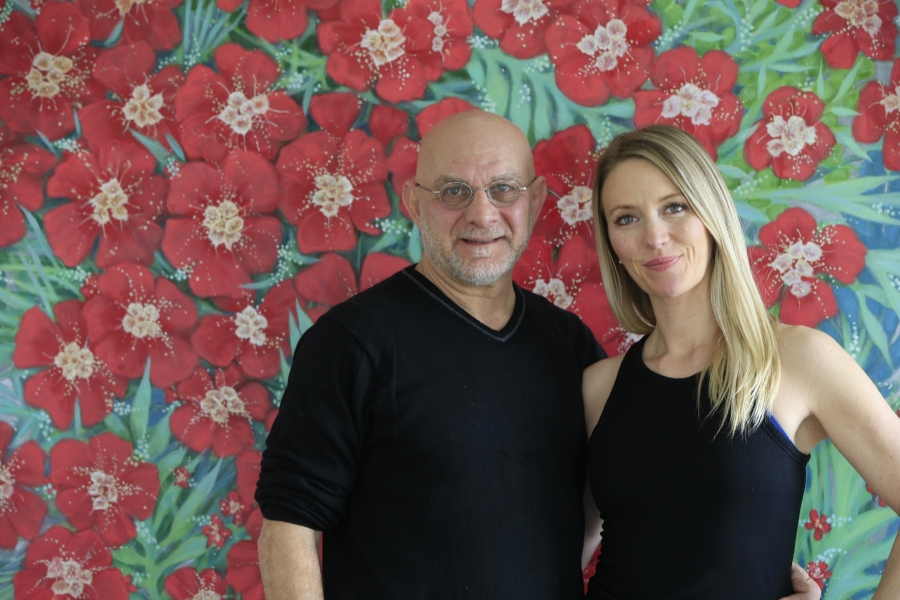 Mark and Sarah DiVincenzo's Pilates Art Studio includes airy rooms set off by windows and his artwork, which is for sale. Both are teaching online because of the coronavirus pandemic and are grateful for the support of clients. (Harry Scull Jr./Buffalo News)

“Some people thought that I could still do it one-on-one,” DiVincenzo said, “but I just didn’t want to take the chance.”

Many of her clients struggle with osteoporosis and other musculoskeletal limitations. About 40% continue to train with her virtually using the Zoom meeting app, available on computer or smartphone.

“There definitely is stuff that you can do at home and it’s not worth risking going out and getting a virus,” DiVincenzo said. “A lot of my clients are over age 60. They have to take this very seriously.”

The hourlong trainings costs $60, or less for those with multiclass discount packages. DiVincenzo and her clients can see each other and communicate. She also launched $15 Zoom group classes Thursday and Saturday mornings for up to 20 people, many more than could attend her group studio classes.

“People are very satisfied so far,” DiVincenzo said. “Not everyone is doing it, so it’s definitely different.”

There have been hitches.

“We’re adapting as it goes,” said Mark DiVincenzo, who needed an extra hour to tinker with technology when he did his first 90-minute online studio class last month. 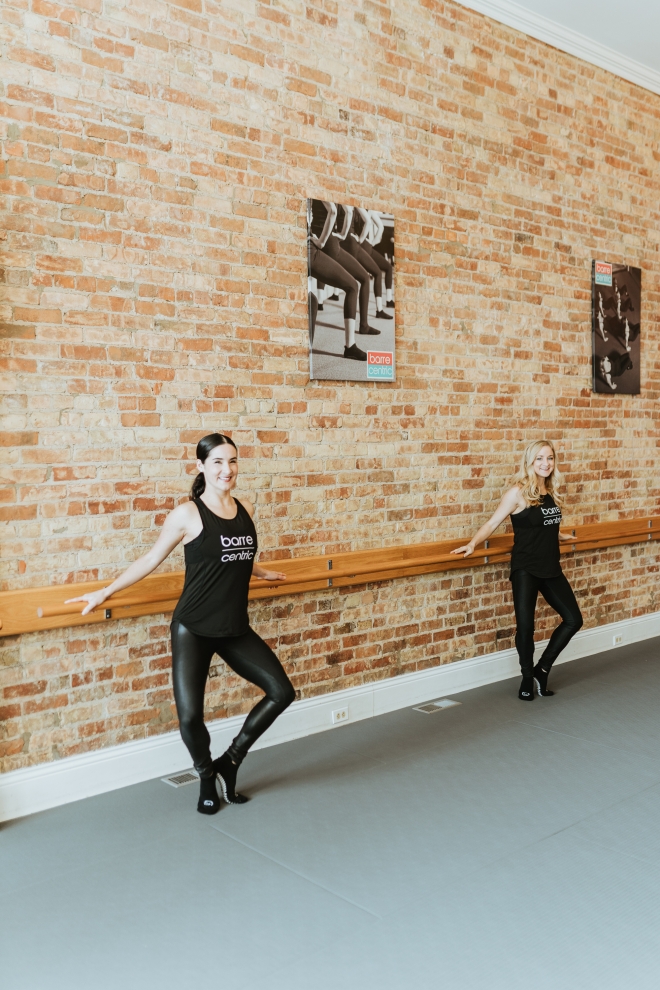 Barre Centric owners Giavana de Zitter and Rachael Jarosz posted this photo when the coronavirus was still fairly new. Jarosz said they couldn't have imagined at the time how deeply the new coronavirus would impact their lives and livelihoods. (Photo provided by Barre Centric)

Barre Centric offers a full-body, low-impact, strength-training workout in which participants use a ballet barre to keep their balance.

Its classes have gone virtual, too.

“They’re mostly bodyweight exercises and it doesn’t take up a lot of space, so we get creative,” co-owner Rachel Jarosz said. “We have you use your chair or your counter at home for the barre. If you don’t have weights, we have you to use soup cans or water bottles. If you don’t have a ball, believe it or not, we did a whole class using toilet paper rolls.”

Jarosz and de Zitter opened their first studio at the Transitowne Plaza in Clarence in 2012, when Jarosz worked at Ingram-Micro and squeezed in time for the new business. Friends since childhood, the pair opened their second studio two years later in the city and their latest two years ago in East Aurora.

Each sits on Main Street in leased space in those communities.

“Because we have these high-visibility studios, we pay premium rents,” Jarosz said.

Both women are now married with two young children. De Zitter’s husband also works in fitness and was laid off last month after gyms were closed. Jarosz’s husband works at home in the tech sector for a California-based company. Covid-19 has barely changed his daily work life.

The same can hardly be said of his wife and her business partner in what have become their full-time careers. They’ve laid off a dozen part-time instructors but kept on their full-time manager.

“I think it’s going to be impossible to recoup the income,” Jarosz said.

They’ve now opened those classes for $40 to anyone who wants to sign up on the studio website, barrecentric.com. Fifty people signed up in the first couple of weeks for Facebook live classes, enough to cover a month’s rent in one of the studios.

They’ve also brought their retail apparel offerings from their studios onto their website.

“The biggest thing besides keeping normalcy for people is that really helped us,” Jarosz said. “If we had just one studio, I wouldn’t be so stressed.” 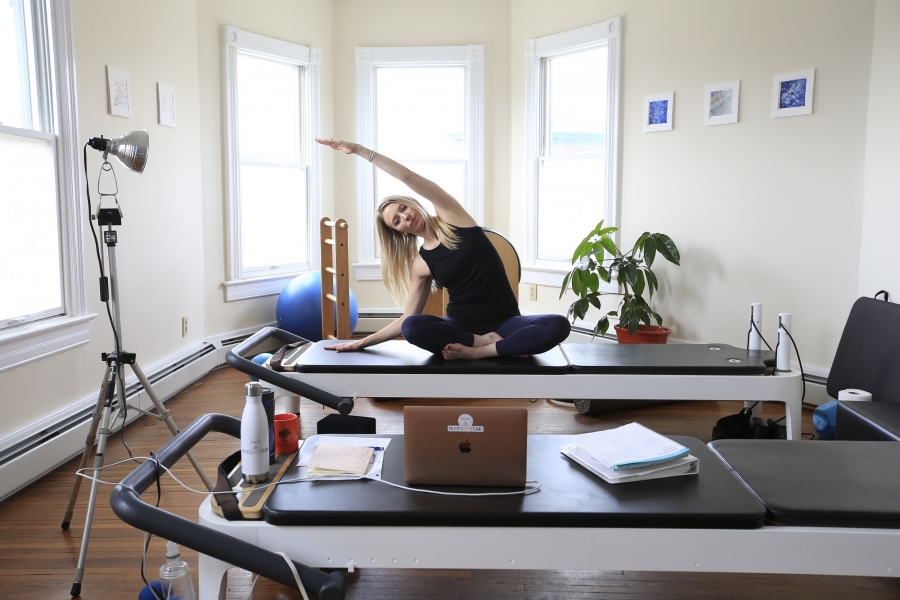 Sarah DiVincenzo teaches a virtual Pilates class in the Pilates Art Studio on the West Side. She and other fitness center owners hope the pandemic soon ends, worry that it won't and wonder how long social distancing will last afterward. (Harry Scull Jr./Buffalo News)

The DiVincenzos have had an easier time making clients whole during the Covid-19 business disruption. They typically charge per class and offer multiclass discounts that can be used anytime. Several clients have bought training packages for the future to help the couple weather the crisis.

Barre Centric members can pay per class or buy multiclass packages, but the business also offers memberships for one month or more. The owners have encouraged members to keep paying and exercise with them on Facebook but will offer a pause in payments upon request.

“We’ve been very flexible with our members needs and because some of them are in the same situation we are,” Jarosz said.

Other fitness centers – whether regionally owned or national chains – are making similar arrangements.

Meanwhile, many fitness company owners have encouraged workers they laid off to file for unemployment. The Pilates Art Studio and Barre Centric owners also will look into federal small business loans to help keep them afloat, although the whole idea seems foreign to them and others who have scratched out successful businesses until now.

She reached out to a group fitness studio owner in Shanghai, where restrictions have been eased since China reported its first novel coronavirus case on New Year’s Eve and shut down the country within weeks. Restrictions in the city were eased last month, but one of the Chinese business owner’s three studios in a busy district remains closed. She also takes temperatures of members and asks them to sign waivers when they come to classes, including the promise they haven’t traveled outside the country during the last two weeks. Social distancing rules and 50% occupancy limits for all classes also are in effect.

“We still don’t know what the future is for us here,” Jarosz said, “but we’re trying to plan a little bit longer financially.”

The DiVincenzos still hold out hope that a Pilates and Art retreat they plan for October in Tuscany will come off. Travel arrangements must be settled by August.