Some nurses at Elderwood at Amherst became so concerned nine days ago about what they feared were inadequate safety measures to prevent the spread of Covid-19 that they sent a letter to Erie County District Attorney John J. Flynn, asking him to investigate the situation.

It is rare for health care professionals to take such a step.

But it is emblematic of the anxiety plaguing patients, their families and even nurses and aides at many nursing homes in the region as the facilities admit patients who have tested positive for the highly contagious virus.

“This is no place for these very unfortunate folks to be placed,” stated an anonymous letter from “a group of nurses” at the Elderwood facility in a letter to Flynn, which was obtained by The Buffalo News.

“Management claims they will be kept separate from our long-term elderly patients. This is not physically possible as we all use one kitchen, one HVAC system, one set of maintenance people, and it won’t be long before they are reassigning nurses and aides either way when there are shortages (which is daily).”

Flynn’s office has forwarded the letter to the state Department of Health, which has told The News it is working on answers regarding the issues raised by the nurses.

Meanwhile, relatives of residents at the Greenfield Health and Rehab Center in Lancaster and at the Absolut Center for Nursing and Rehab in East Aurora – which have admitted a hospital patient treated for Covid-19 or had a resident test positive – are also expressing concern.

Elderwood announced on March 30 that it would convert its rehab wing into a 22-bed unit to treat Covid patients. Officials there assured families and staff that they would take the necessary measures to ensure that the unit would be wholly separate from the rest of the 92-bed nursing home.

Many of the concerns raised in the letter to Flynn have been addressed, according to Elderwood spokesman Chuck Hayes.

A wall has been built to separate the Covid-positive patients from the long-term residents. A separate ventilation system and separate entrances have been created. Staff assigned to the Covid unit are not working in the rest of the building.

Hayes did not answer questions from The Buffalo News regarding the kitchen or maintenance staff at the nursing home, which the federal government most recently deemed “above average,” giving it four out of five stars.

As recently as Wednesday, Elderwood officials were still trying to recruit more of their nurses and aides to volunteer to work on the Covid unit, offering an additional $5 an hour “appreciation pay.”

“They’re still sending us emails to see if we want to sign up,” said one nurse, who asked that her name not be published.

The News contacted more than a dozen nurses or certified nurses aides employed by Elderwood at Amherst about the letter sent to the district attorney. Only the one would talk with a reporter. That nurse said she did not write the letter. 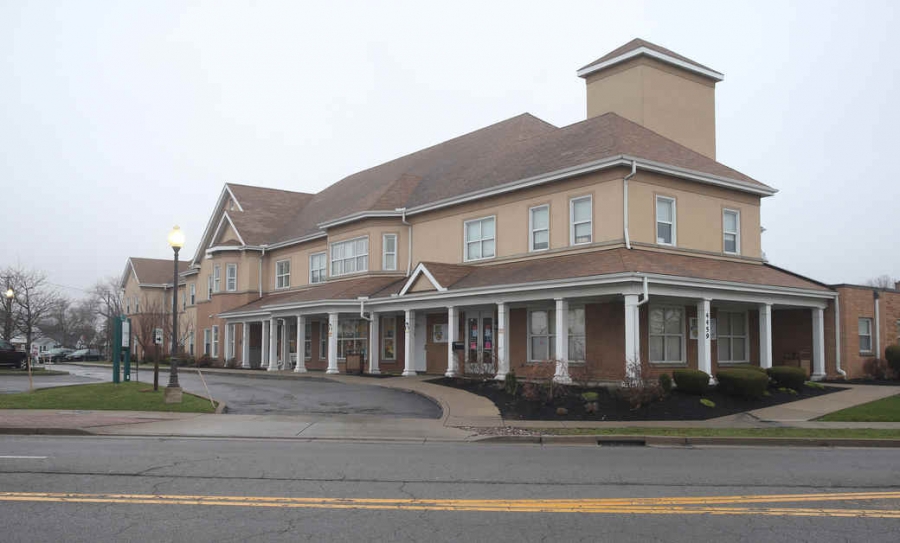 'My mom could get this'

Cheryl Darling said that three officials at Absolut at Aurora Park, including the administrator, told her Wednesday that a resident of the nursing home has tested positive for Covid-19.

The infected resident is in a different building than her 79-year-old mother, Nancy Darling, she said.

“It’s obviously coming from outside, from employees,” said Cheryl Darling, noting that nursing home visits have been banned in New York State since March 13 because of the pandemic.

Darling said she is very concerned because she has watched with horror in recent days as nursing home workers taking care of her mother helped her get into bed and with other tasks while wearing protective masks in a way that did not cover their mouth or nose.

She was able to see that, she said, because she installed a security camera in her mother’s room at the nursing home two years ago so she could remotely monitor how the staff were taking care of her mother in the facility, which the federal government has rated as "below average," with two out of five stars.

“They’re not even wearing their masks the proper way,” she said. “If the staff has it and they’re over my mom, my mom could get it. If my mother gets this, I am going to be flipping out.”

Jason Newman, a spokesman for Absolut at Aurora's new owner, RCA Healthcare, confirmed that the nursing home has at least one resident who has tested positive. He said he would not disclose how many residents are infected because he said it is not relevant.

Employees who are treating Covid-19 residents are wearing full personal protective equipment, he said. He declined to comment on Darling's concerns about masks.

"I cannot answer to what she is seeing on the camera with a specific employee," Newman said.

John Cipolla is concerned about his 88-year-old father, a resident of the Greenfield nursing home in Lancaster, because the staff informed his family on Tuesday that it had admitted a resident who had Covid-19.

He said the nursing home’s staff would not identify the resident with the virus or tell his family whether that person is housed in the same wing as his father.

Pasquale Cipolla has been a resident at the top-rated nursing home since October, when he went in for a short-term rehabilitation. He has Alzheimer's disease, a heart valve replacement and other ailments.

“If they’re in the same wing or next door to my father, we would have my father moved to another wing, at the very least,” his son said.

Greenfield CEO Christopher Koenig confirmed the nursing home has admitted one person who was discharged from the hospital after being treated for Covid-19.

He noted that the nursing home had no choice, legally or morally.

“On March 25, every nursing home got a letter from the state Health Department giving directions on the admission of Covid-19 patients,” Koenig said. “The letter said, ‘No resident shall be denied readmission or admission to a nursing home solely based on confirmed or suspected diagnosis of Covid-19.’ It was underlined.”

He said the message from the state was clear: You cannot discriminate or we’re going to come after you.

Fortunately, he said, Greenfield had just finished constructing an 11,000 square foot expansion, which he said is being used as an isolation wing to house any Covid-19 positive residents it admits.

“It is completely shut off from the rest of the facility,” he said. “There’s dedicated staff to work in it. We made sure we had enough personal protective equipment.”

Still, he acknowledged that anxiety about the virus is running high throughout the community.

Koenig said no other residents or staff members at Greenfield have tested positive or are showing symptoms of Covid-19.

“We have been lucky that we have not had a case of community spread,” he said. “There are not many nursing homes in Western New York that haven’t been touched by Covid-19.”