You’re in high school, and you’ve been working hard to become a decent, reliable musician, navigating the complexities of jazz-based arrangements, learning how to play your part in a large ensemble, realizing, even if you’re not yet cognizant of the fact, that sacrificing your ego for the greater good of the team allows the long-term acquisition of a lot, rather than the mere short-term acquisition of a little.

You’ve become a solid musician, a strong ensemble player, and you’re still pinching yourself when you realize that, through dedication and hard work, you’ve found a way to make music a major part of your high school experience. Your reward is on the horizon – in the fall of your senior year, you’ve been invited to perform with your classmates and band director as part of a prominent overseas jazz festival. You’re all but basking in the glow of possibility that colors what older people keep reminding you are “the best years of your life.”

Then a pandemic arrives. All bets are off. At once, you’re not even sure if you’ll be seeing your bandmates in the foreseeable future, to say nothing of traipsing around the world playing America’s greatest cultural contribution, jazz, for crowds of people you’ve never met.

It wouldn’t be hard to despair, to find repose in a state of mild depression and ennui. Ah, but your teacher has other plans. Don’t let your instrument gather dust in the corner while you engage in marathon "Grand Theft Auto" tournaments online. You’re going to need to put your hard-earned chops to good use.

“I’ve had the idea in the back of my mind for a few years,” Hamburg High School band director Larry Dubill said. “I’d been thinking about trying to do something internationally with our friends from Buffalo’s sister city in Japan, Kanazawa.

“Our Hamburg High School jazz students have been invited to go and perform this coming September at a jazz festival in Kanazawa, which would mark our fourth tour visit to Japan. When the pandemic started and the cancellations came and students had to stay home, I thought it would be a fun project for them to create a virtual jazz performance recording.” 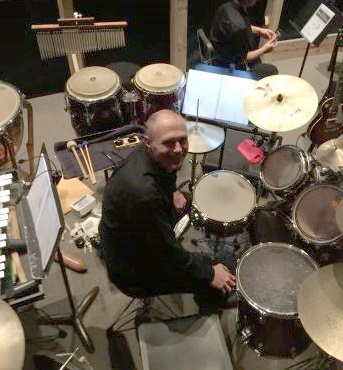 So how did you and your fellow students react to the challenge? With what your band director calls “a mixture of enthusiasm, technology apprehension, and curiosity.”

Here’s where what you’ve learned during your high school years will set you in good stead for the future, whether that future involves playing for-hire recording sessions or doing something wholly outside of the realms of music.

“They were really pros in their attitudes of stepping up and trying it,” said Dubill, who arranged a remote session for his student musicians and grabbed hold of Herbie Hancock’s evergreen “Watermelon Man” as a suitable common ground for a virtual jam session, though there were a few technological hurdles to jump.

“The performance had to be handled like a studio recording experience, from the students’ own homes,” the 22-year Hamburg band director said. “I met with the students on Zoom and Google Classroom, and went over how to do it, in terms of microphone placement, uploading instructions, using Smartmusic online as play along software, etc.”

Dubill did encounter what so many other musicians, myself included, have come up against in the days since the coronavirus crisis made playing together in the same room inadvisable and irresponsible – the latency issues that make it unlikely to lock in with other musicians over the internet.

“It is not possible for them to perform live together, due to internet lag,” Dubill admitted. “They recorded their parts while playing along with a SmartMusic track, with headphones. Notation is also provided on SmartMusic. After they uploaded their videos to a shared Google folder, I uploaded the files into GarageBand, mixed the sound, lined it up, then exported the sound files to Final Cut Pro. I brought the videos into Final Cut Pro, edited it, lined it up, then lined it all up with the audio.”

[Related: ‘What if I never get to sing this beautiful music with these people again?’]

A lot of work, then, and of course, never as organically pleasing and relatively effortless as heading into a shared practice space or recording studio to chase the muse in real time. But these challenging times require a mindset open to adaptation, and the kids needed this, as much as their instructor did.

“The kids have a mixture of many emotions,” Dubill said. “My daughter is a senior in the band, and many of these kids really worry about missing out on some of the milestones that were upcoming – concerts, prom, graduation, sports, etc. I’m sure there is a sense of anxiety and an unsettled feeling, since nothing like this has ever happened before for them, and they are looking forward to returning back to a normal routine.”

How can music help us all deal with all of this? How can it help us to come together when we can’t really be in the same room?

“One of the main reasons I wanted to get on this project right away is that I realized it was really important to meet and collaborate,” Dubill said. “We had some really fun Zoom meetings and lessons with lots of laughs and stories. Giving them a creative project helped them to focus on their music making and gave them a chance to learn about the digital music environment that they now have access to. ...

“Even though virtual performances are put together by a different process, they still has some very worthwhile and educational functions. I can see doing this in the future, especially with friends and colleagues that live out of town, or even in Japan! Music really reaches the soul, and it can give a sense of calming and focus in life.”