Patrick Spoth and his family have recounted the fond memories from last weekend's fairly impromptu drive-thru at their Kelkenberg Farm.

Families FaceTimed home-bound relatives, sharing reactions as they drove slowly through the sprawling Clarence farm, past curious livestock like goats and sheep, a special "Tractor Row" and the farm market, where attendees picked up a small bag of doughnuts out of a basket at the end of an 8-foot pole — social distancing at its finest.

Kids and their parents, in one car, were on the phone with their grandparents — in the car immediately behind them — to talk about what they saw. At least three or four vans from People Inc., which serves special needs communities, came and went throughout the day Friday, providing a glimmer of excitement during a period of fear and uncertainty.

"I even put my good pants and makeup on to come out to the farm," Spoth recalled one visitor saying. Considering the farm welcomed roughly 1,500 cars per day over a three-day span, Spoth estimated more than 10,000 people drove through, equaling an entire season of visitors during a typical eight-week season.

This is not a typical year, though, and the Covid-19 pandemic has been hard on Spoth and his wife, Charlene, second-generation owners of Kelkenberg Farm, at 9270 Wolcott Road, where they rear an abundance of animals, plant and harvest crops, and host an abundance of school field trips each year. Their four kids, Liz, Pat, Matt and Anna, are active on the farm as well. 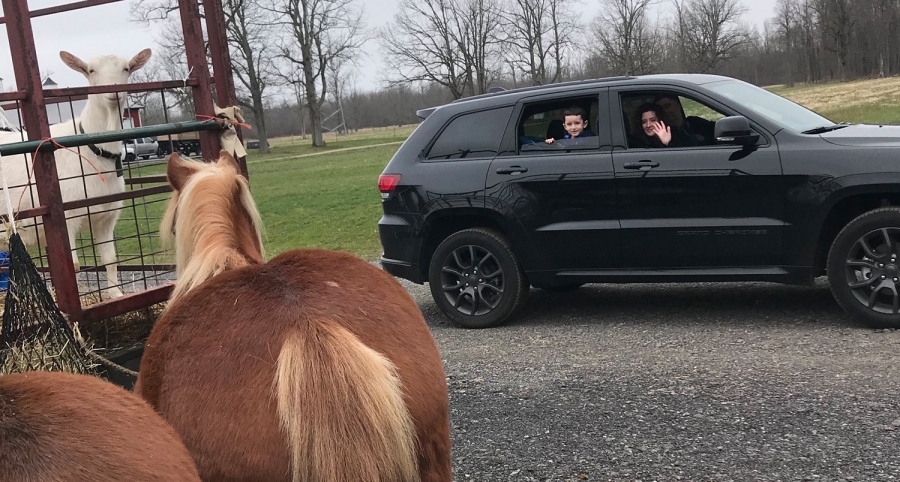 Families drove through Kelkenberg Farm last weekend to see the animals and tractors while keeping a safe distance from others. (Photo courtesy Kelkenberg Farm)

It's not so much the pandemic has changed their routine — Spoth said you can count on one hand how many times he and his wife go out to dinner each year — but it's limited the visitors that bring joy to the family and thrown a wrench into their finances.

"When they closed schools this spring, it erased a third of our income, based on the field trips that come to our farm," Spoth said. "It hurt us bad, it was awful for us. But it's hit a lot of other people the same, or worse."

The pandemic's effects extended beyond financial, though, as Charlene, who's owned the farm since 1992, is gifted at the educational aspects of the farm, and providing hands-on activities, such as holding chickens, milking goats and petting sheep, for kids visiting the farm is most rewarding for her.

"It's frustrating for her not to be able to do that," Patrick Spoth said. "It's been hard for her to deal with."

The owners have fielded calls from regular visitors, though, who sounded desperate for something safe to do outside the house.

"Tons of people have been calling the farm, asking to see the animals," Spoth said. "They said, 'We don't have anything to do with the kids.' "

The family decided to float an idea on their Facebook page, suggesting the possibility of a free, drive-thru event where people could experience the farm without leaving the car, touching the livestock or violating the social-distancing measures required during the pandemic.

The response was beyond anything the family expected. "Just imagine how flabbergasted we were," Spoth said, when the Wednesday Facebook post rapidly reached 60,000 people, with 600 comments and another 600 shares. For a frame of reference, a strong post on the page typically might reach 3,000 to 4,000 users.

Concerned about abiding by the Covid-19 restrictions, the Spoth family prepared "the best they could," staggering masked employees throughout the 5-to-7 minute path through the farm to make sure no one left their cars, emphasizing restroom facilities were not available and refusing to accept money for the goodwill event.

The from-scratch doughnut preparation was handled with similar care, using tips from the Erie County Department of Health that involved prepackaging the product, using masks and gloves.

"We were concerned with people's reaction to (holding the event)," Spoth said. "The fact we weren't charging or asking for donations, people realized it wasn't a money grab or we weren't trying to take advantage of people's situations."

The course was fairly simple: After entering the farm from the parking lot, drivers and their passengers would see "Tractor Row" first, with Kreher Family Farms' John Deere tractors as guest stars.

They'd roll forward to see horses in their pens, followed by hay wagons loaded with goats and sheep, a poultry area featuring chickens and ducks, and then bunnies and a smorgasbord of other farm animals who wanted to be involved. A baby calf, visiting from a dairy farm in Avon, drew special attention. Before visitors departed, they picked up the small bag of doughnuts by the farm market.

"People were rolling down their windows in tears," Spoth said. "The kids were so excited to see the animals." The animals shared the same enthusiasm, the co-owner noted, showing an unexpected eagerness to hop back into the wagons over the course of the three days.

At its busiest, drivers waited more than an hour to enter the farm, which, to Spoth's regret, did cause traffic issues for neighbors. Spoth said he and his family would like to host a similar drive-thru event again, but for now, he's taking a wait-and-see approach.

"Everything changes so fluidly; something you did today, you can't do by the afternoon," he explained. "We're going to let the dust settle and see where it goes from here."

But, for both visitors and the farm's family, the three-day extravaganza was a blessing during a tough time.

"It put a smile on their faces," Spoth said, "but just how big of a surprise it was for us ... it was therapeutic for everyone."