I tend to steer clear of them unless it comes to my well-being.

Here’s where it gets complicated.

I used to donate, occasionally, after a health scare two decades ago that included regular blood draws. Then the kids grew up, my job got more demanding, and I remarried. I’m getting older, I thought, so why not let younger folks shoulder the load?

During the last three weeks, I’ve spent most waking hours at the desk in my den, working remotely with colleagues at The Buffalo News to cover the novel coronavirus pandemic as it stymies our regional lives. 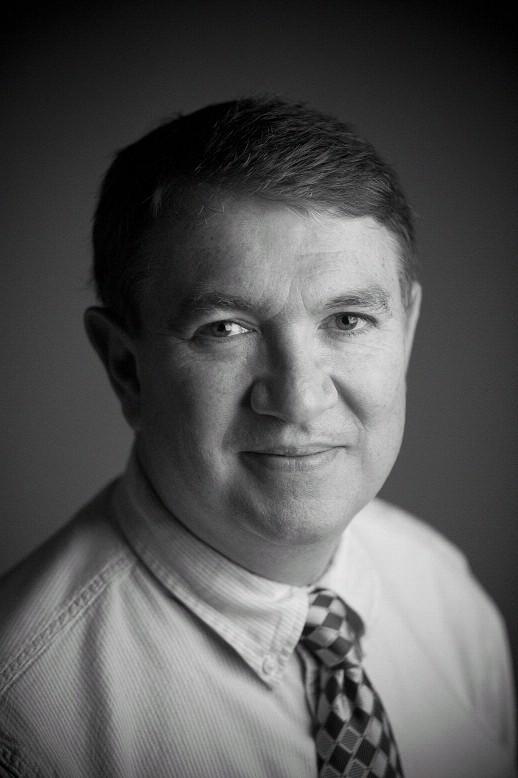 “I can’t watch,” I told James Cannata as he prepared to draw my blood. “Nobody does,” he said. “It's a little burn and that's it. You're done.” — Refresh Editor Scott Scanlon

It’s frightening, aggravating and damned inconvenient for most of us. It’s devastating for others.

It also creates opportunities to step up.

The Western and Central Region of the American Red Cross, along with ConnectLife, put out a call three weeks ago for more blood donors.

By late last week, nearly 10,000 Red Cross blood drives had been canceled across the country because of the new coronavirus, including 600 in New York State.

ConnectLife had to scrap 85 drives in this region in March and April; the regional Red Cross canceled dozens more, contributing toward an estimated 15,000 fewer blood donations statewide.

Both agencies are among blood banks across the country trying to make up for about 300,000 fewer blood donations nationally.

I could spare an hour to help.

I gave at the regional Red Cross headquarters on Delaware Avenue and called beforehand to make sure it was OK to walk in.

To be sure, physical distancing and a sharp eye on infectious control were part of the process. All who walked me through it wore protective gloves and other equipment.

My temperature was taken in the front lobby when I arrived. It was fine. Wipes and sanitizers sat on almost every desk and table.

First, I had to read the eligibility procedures. You must be 16 or older and weigh at least 110 pounds. I easily qualified on both counts. I also hadn’t traveled outside the country to hot spots for Covid-19 or other infectious diseases, I wasn’t sick, and I don’t have any communicable diseases.

The staff assured me there have been no reports across the globe that Covid-19 has been transferred through a blood transfusion.

Phlebotomist Kathleen Sciandra clasped a blood-pressure cuff around my right arm and pronounced my pressure at 120/70. Health visits usually produce higher numbers for me. She would have, too, if I hadn’t forgotten about the pin prick test that came next. I flinched as she neared my right middle finger, a split-second before a tiny, anticlimactic prick and quick hemoglobin test assured that more of my blood could be taken.

Tunes from my favorite era, the 1970s and '80s, washed through what a century ago was the Music Room of the Clement family mansion. Songs included “You Ain’t Seen Nothing Yet” and “Staying Alive.”

James Cannata, a mobile operations supervisor, did the honors for me. He told me blood being donated now is mostly for those who need ongoing medical treatment or suffer a traumatic health emergency.

“I can’t watch,” I told him as he prepared to draw my blood. “Nobody does,” Cannata said. “It's a little burn and that's it. You're done.” 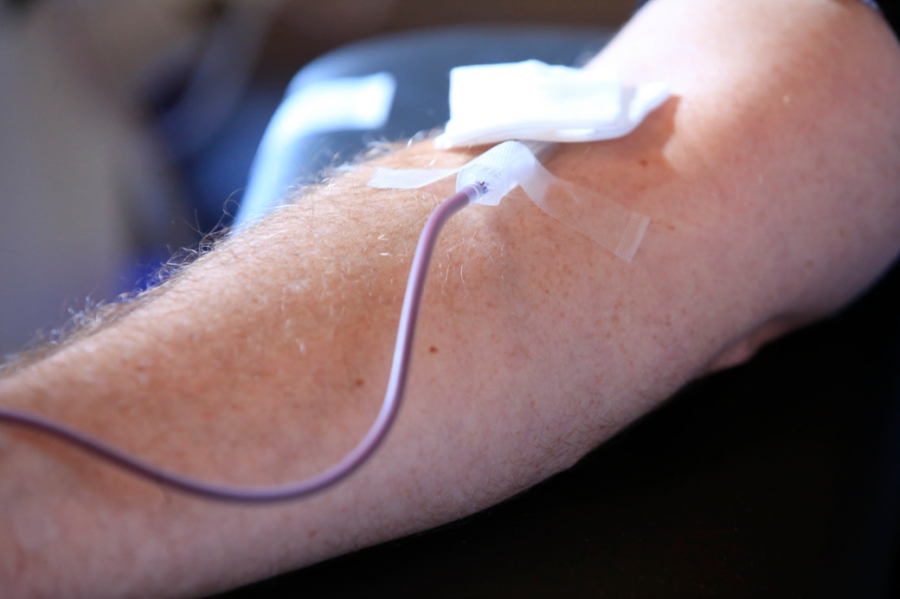 It takes about an hour to go through the process of donating blood but drawing blood into a unit only takes about four or five minutes. (Harry Scull Jr./Buffalo News)

He scrubbed my right arm with a sterilizing agent, I took a few strong squeezes on a foam wedge in my hand, felt a slight pinch in the vein above my forearm, and relaxed. Four pain-free minutes and 32 seconds later, a unit of whole blood was ready to help as many as three other people.

“I've seen a lot of new donors and returning donors that haven't donated in years,” Cannata said. “They just want to do something to help. It's almost like a social event for people who can't leave their houses. Some repeat donors haven't donated in 20, 30 years. They're coming back and really want to get into it. This is a good reason.”

It turned out I was hardly alone in answering the call for blood. It’s almost impossible to schedule a donation appointment in the region for the next two or three weeks, partly because schools and many businesses that tend to host events are closed. It's also because so many in the region have come forward.

“Western New Yorkers are a different breed … plus no one is working,” said Amanda Farrell, ConnectLife director of donor recruitment.

Donors from across the region, of all races, colors and creeds, have made their way to blood donation centers and civic organizations still willing to serve as outposts. A Chautauqua County volunteer firefighter left as I arrived. Teachers have been well represented. Moms and dads have swapped turns giving and staying home with the kids, Cannata said.

“We can't just stop donating blood because of a crisis when there are still people who need it,” said Jay Bonafede, spokesman for the regional Red Cross. “This is something that people can control. They're willing to do it to help their community and their country.”

He told me a few minutes later that blood donations significantly help cancer patients, among so many others, and I struggled to stay composed. A close friend of more than 40 years started chemotherapy just a couple of days earlier.

I spent several minutes at a recovery table, drinking water and avoiding the pretzels and Oreos, with Matthew Veronica, 28, a physical therapist and personal trainer who lives in the Elmwood Village.

We shared the guilt over finally ending good intentions that had lingered two years or more since the last time we found ourselves in such a circumstance. His girlfriend, Christine Abrams, a physical therapist at Buffalo General and Erie County medical centers, encouraged his visit after hearing concerns from workers and patients about the thinning blood supply.

“This is a way I can help,” said Veronica, owner of Move Well PT, who now works temporarily from home leading online telehealth and telefitness trainings. 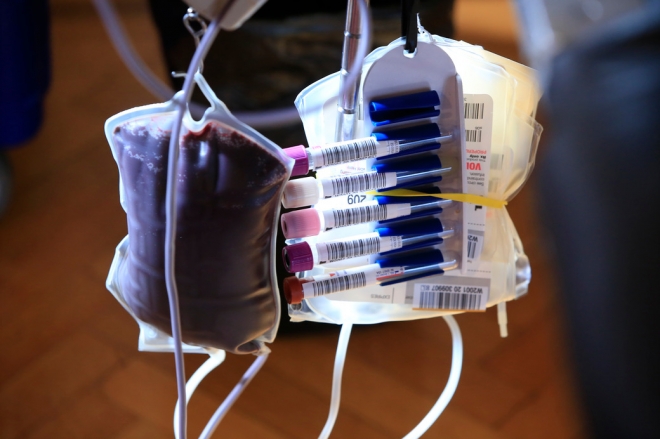 ConnectLife estimates that one in seven hospital patients needs blood. One unit of blood can help as many as three people. (Harry Scull Jr./Buffalo News)

Supply has largely kept pace with demand now that most elective surgeries have been postponed and most people are staying indoors, lessening chances for accidental injuries.

Bonafede and Farrell expect that to change in coming weeks, perhaps during a regional surge in Covid-19 cases, but surely after our lives begin to return to some semblance of a recent past only fondly now remembered.

“What we're really fearful of is that four weeks from now, six weeks from now, people are just going to forget about the need,” Farrell said, “and that could lead to the country's worst blood shortage in decades.”

Those willing to give blood through ConnectLife can visit connectlifegiveblood.org or call 529-4270.

Those willing to give blood through the Red Cross can visit redcrossblood.org or call 800-733-2767.

It was gratifying to learn that whole blood can be used for up to 42 days and humbling to know that some donors are willing to regularly give platelets – which stay shelf stable for only five days – as part of a more involved process.

“It's always so great to see that people come out when there is a crisis,” Farrell said, “but how do we get people to think about blood donation as something needed year-round? Right now, it's donors that came in weeks ago that are helping people.”

She reminded me that I can give blood again in 56 days, after I told her I’d sign up with Unyts next time around.

This time, there will be no excuses.