The coronavirus left Jo MacKay stranded far from home for a while, but she was by no means alone.

MacKay, of Williamsville, is one of 38,296 Americans who found themselves stuck overseas amid the Covid-19 crisis who managed to make it home as of Friday, according to the U.S. State Department.

But it wasn't easy. MacKay, 84, endured a harrowing journey from Guatemala to Buffalo, replete with a robbery on the first day of the trip.

"It was three terrible days without food, without water, often with good people showing up out of nowhere" to help, she said.

But MacKay was lucky. Thousands of Americans – including several from Western New York – are still struggling to get home at a time when airlines are shutting down flights and nations are closing borders.

"We can feel a little helpless here," said John Salazar, 54, of the Town of Tonawanda, whose vacation to Cape Town, South Africa, is lasting longer than he wanted. "We can't do anything so we're just sitting here eating and doing nothing else."

Local congressional staffers have been busy, though, helping people like Salazar and his sister, Graciela Benavides of Batavia, find a way home. While there's no way to get an exact count of how many Western New Yorkers remain overseas, staffers for local House members and New York's two senators all have been working to bring people home.

"It's really complicated," said Rep. Brian Higgins, a Buffalo Democrat who credits a staffer who specializes in the issue, Suzanne Macri, with helping MacKay and other stranded Western New Yorkers.

Here's a look at four of those complicated situations – two that ended with local residents making it home, and two that involve people still stranded.

MacKay has been splitting her time between Williamsville and Guatemala for years, but she cut short her latest trip.

"I knew I had to get out, or I was going to be locked down there, probably for several months," MacKay said.

So at 4 a.m. on March 22, MacKay's adopted son – who lives in Guatemala – drove her to the Mexican border town of Tapachula for the first leg of her flights home.

"I had to walk across, pulling luggage and everything, and then ride in a little three-wheeled thing – sitting on boards – flying down the highway to get into town," she recalled.

In Tapachula, MacKay checked into a Holiday Inn Express just before 3 p.m. Before stretching out for a nap, she set aside her wallet, her money belt and her passport at the foot of the bed.

When she woke up about three hours later, they were gone.

"I was wiped out of all my ID, my money, everything," she said.

The hotel staff proved unhelpful, but a call to the U.S. Embassy in Mexico City prompted a return call a few hours later. The foreign service officer told MacKay: "It's all set, you're in the computers with Delta, and you are going home."

Except she wasn't. The next day, MacKay spent 11 hours in the tiny, stuffy Tapachula airport, sustained by nothing but an apple and a bottle of water, as Mexican immigration officials dickered over whether she should be allowed to fly out.

Finally, at about 7 p.m., a supervisor walked her to her plane to Mexico City.  There, she checked into a hotel, ate dinner and went to sleep.

Back at the airport the next day, MacKay had no trouble boarding a flight to Atlanta, where she grabbed a hamburger and a beer at a TGI Friday's before heading to her gate for her flight to Buffalo.

There, at about 9:45 p.m., a Delta Airlines desk clerked looked at MacKay's documents and said: "I can't board you."

The plane's pilot was nearby. He heard what had happened and asked MacKay: "Is Buffalo home?"

MacKay told him yes, and the pilot replied: "I'll get you there safely." And he did.

She landed in Buffalo on March 27.

"I guess pilots are in control of the plane," MacKay noted. 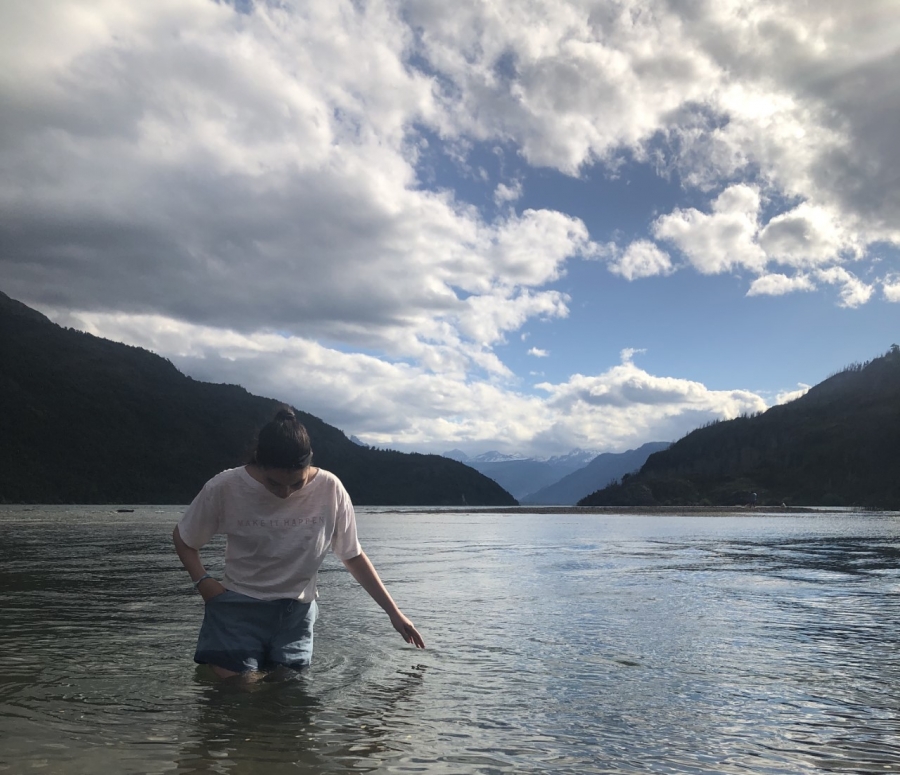 Fiona Stewart in a lake in Chubut, Argentina, in January. (Provided photo)

Fiona Stewart thought she'd spend her entire senior year of high school in Argentina, but instead she's back home in East Amherst after a three-day, five-flight journey that came only after a series of canceled flights.

Stewart was on a high school exchange program in a rural village called Alpachiri, but the program got canceled amid the coronavirus outbreak on March 14.

She couldn't get a flight back home for another week.

"Argentina had been placed under a countrywide quarantine in the week before I left," she said. "And then La Pampa (the province where she was attending school) decided that it would start closing its borders. So I had to get official permission to get out and be repatriated."

Then her flights kept changing. She got to the airport in Buenos Aires in the middle of the afternoon on March 21, but she couldn't leave until the next morning, when she flew to Santiago, Chile.

In the Santiago airport, "there were cots placed for international travelers, and people were sleeping everywhere," Stewart recalled. "You'd look at the departing flights and it'd say: 'Canceled, canceled, canceled.' "

So over the next two days, Stewart flew to Mexico City, Miami, Detroit and then finally Buffalo. She slept on planes and in airports "in three-hour stretches," she recalled.

Stewart completed most of her high school credits last year, so her abbreviated adventure in Argentina won't interfere with her plans to attend Swarthmore College this fall.

"It's relieving to be home, but it's also very strange," she said. "I did not anticipate going home in March. But I'm glad I'm home because it sounds like the situation for travelers is getting worse and worse." 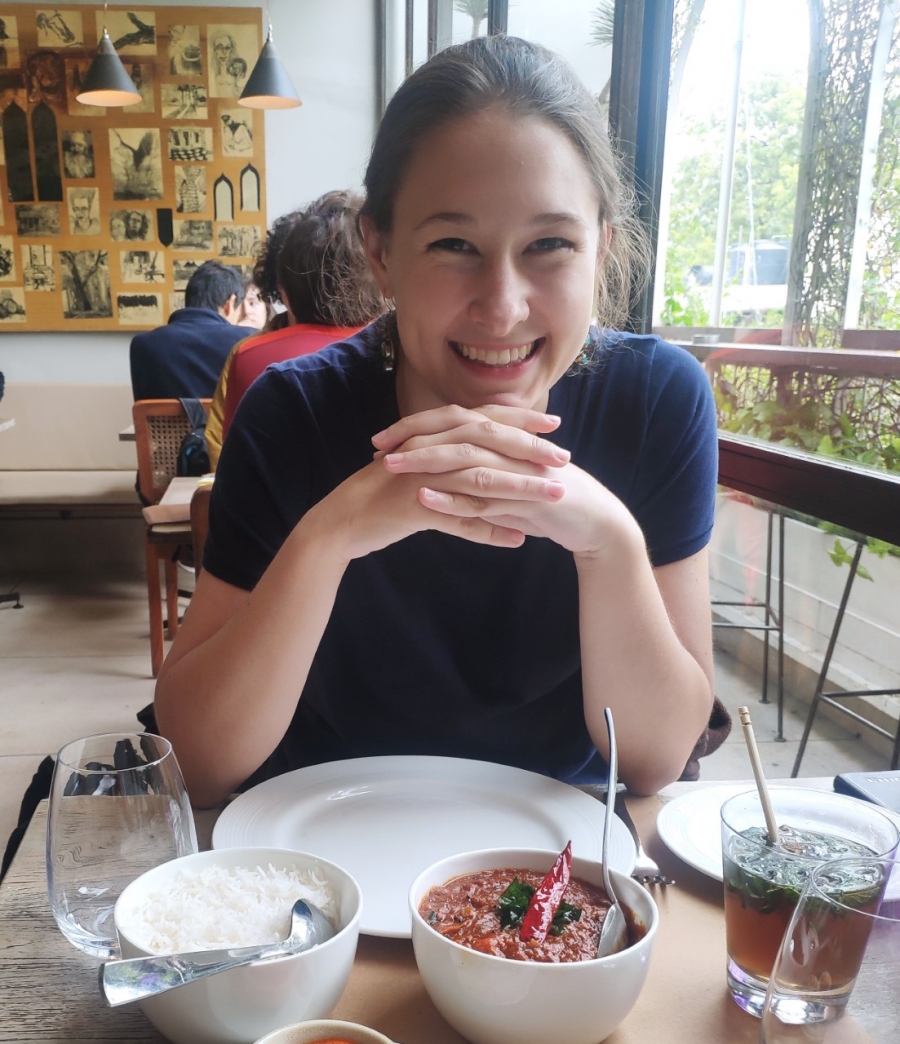 Sarah Hoffman at a cafe on Reunion Island. (Provided photo)

"I've been trying to leave for the past two weeks, but it's been a bit difficult" even though State Department officials have been very helpful, said Hoffman, 23, who finds herself stranded in a faraway land she loves.

"It's a really beautiful volcanic island," she said of Reunion, which has a population slightly smaller than that of Erie County. "It has beaches and coral reefs and mountains and an active volcano. It's a very diverse place, which I like. So I really like it here."

But on Reunion Island, as in America, life as we knew it began shutting down in early March.

Hoffman hasn't seen or been in touch with her students in weeks. She just stays at home with her roommate, venturing out only to get groceries on an island with more than 300 Covid-19 cases.

Several times, Hoffman was able to book a trip to Paris, only to see the flights canceled. Now she has a flight set for Paris, and then to John F. Kennedy International Airport in New York, for this coming Thursday. 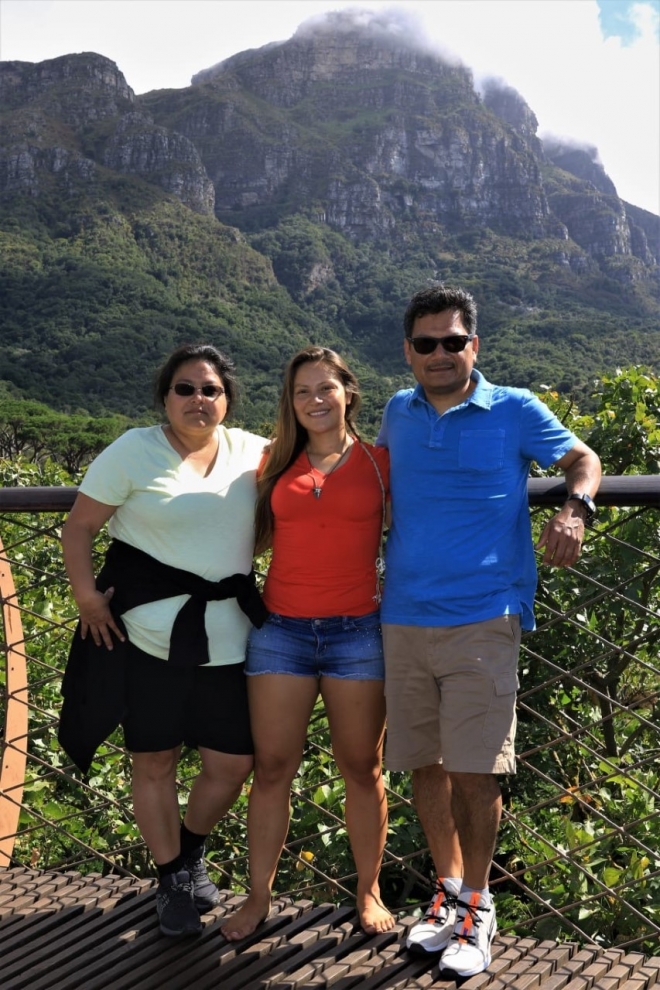 John Salazar flew to South Africa on March 14 for what was supposed to be a visit with his niece, who's studying in Capetown.

But now, Salazar and his sister are studying the inside of their AirBnb and not much else. Their March 28 flight home got canceled, and while they have tried to rebook several times, they've had no luck – but plenty of time to fret.

"We're worried about things back at home," Salazar said. "We see how things are there, so that's more of a concern for me, feeling helpless over here to help out back home."

South Africa, which has had about 1,500 Covid-19 cases so far, remains on lockdown. So Salazar and his sister venture out only to go to the grocery and the airport, where they have tried and failed to book flights.

Like MacKay, Stewart and Hoffman, they have worked with Higgins' office and with U.S. embassies to try to arrange their escape.

"They said they're still working on a flight, hopefully for midweek this coming week," Salazar said on Friday.

Every day stuck abroad means lost pay for Salazar, who works for a delivery company in Buffalo. And there will be lost pay when he finally makes it home, too.

"My work has told me I'll have to go into a 14-day quarantine, so that's another two weeks that I'll be off," he said.