Instead of picking up palm branches on Palm Sunday, the area’s half-million Catholics are being asked to grab their iPads.

The solemn holiday season that begins Palm Sunday and runs through Easter Sunday usually is the busiest churchgoing time of the year.

But churches will be empty this year, due to efforts to slow the spread of coronavirus. Holy Week will be experienced in people’s homes, largely through TVs, smartphones and computer screens.

Catholics aren’t even able to get a blessed palm branch, a revered symbol distributed on Palm Sunday to remind parishioners of Christ’s entry into Jerusalem in preparation for his death on a cross.

Bishop Edward B. Scharfenberger banned palm distribution – telling pastors in an advisory letter this week that the spread of coronavirus made it too risky, even if the palms were left on tables inside church vestibules for individuals to collect.

In an interview with The Buffalo News, Scharfenberger said the ban was “painful to a lot of people” because taking blessed palms home from church is such a time-honored Catholic tradition.

But he said it would be too difficult to try and give out palms without proper social distancing and other precautions.

Scharfenberger said Catholics are accustomed to showing up at their churches to pray and worship. But they should also remember that the practice of the faith historically has happened in homes, and that there are prayers, prayer services and scripture readings that can be done by Catholic families in their homes, he said.

“It’s a new way of thinking of the domestic church. It’s very much a part of our longstanding theological tradition, but we’ve often thought of church as a place you go to, rather than a place that actually you live in,” said Scharfenberger.

He compared what Catholic families might do this week to what Jewish people have done in their homes for generations to celebrate Passover.

“It’s something where we’re rediscovering that it is part of our Judeo-Christian tradition and people are beginning to see that, too,” he said. “It’s something we didn’t expect we would be doing, but it’s happening.” 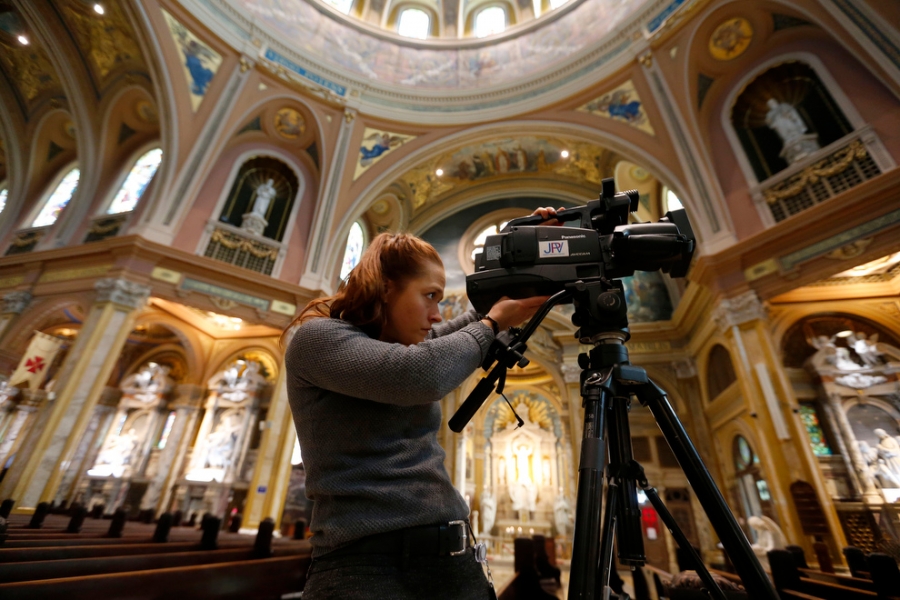 Ashley Czarnota sets up a camera before taping Mass at Our Lady of Victory Basilica in Lackawanna on March 25, 2020. (Mark Mulville/Buffalo News)

At least 18 area Catholic parishes currently livestream Masses and other content, using Facebook, YouTube or Vimeo. The diocese also will offer radio Masses on Palm Sunday and Easter Sunday at 8:30 a.m. on WCJW-FM and televised Masses from St. Joseph Cathedral at 11 a.m. Palm Sunday on WBBZ-TV and at 10:30 a.m. Easter Sunday on WNLO-TV.

The area’s largest Catholic parish, St. Gregory the Great in Amherst, will offer daily livestreamed Masses, the Divine Mercy chaplet and Lenten reflections on Monday, Tuesday and Wednesday, as well as a Liturgy of the Hours on Holy Thursday morning and a Holy Thursday evening Mass, a traditional 3 p.m. Good Friday service and Easter Vigil Mass on Holy Saturday and four separate Masses on Easter Sunday. The parish consists of about 6,000 families.

The church will be decorated as in years past, albeit with some modifications so that decorations can be seen on camera, said the Rev. Leon Biernat, pastor.

“We want it to be as we would always do, so people feel the most at peace. It’s a very tough time for everyone. People are really suffering, especially the regular church. So, we want it to be as close to what they would normally see and experience as possible,” he said.

Biernat said web traffic for livestreamed services at St. Gregory has been strong, after the bishop canceled all in-person Masses across the diocese nearly three weeks ago.

Weekday online visitors averaged about 600 per day, and this past Sunday, livestreamed Masses drew 2,000 to 3,000 users, and that’s not counting anyone who accessed the Masses through the parish’s YouTube channel, he said.

Biernat expects those numbers to climb higher this week.

“By nature, Holy Week is one of those times that people really come to church more and are looking for something more,” he said.

The parish upgraded its computer equipment and internet capabilities a few months ago and should be able to handle increased volume on its website, he said.

The timing of the coronavirus pandemic is especially bad for churches, because non-regular attenders show up during Holy Week and Easter and contribute generously, helping many parishes to make ends meet.

As the hiatus on Masses drags on, parishioners also may become accustomed to not going to Masses on Sundays.

Scharfenberger acknowledged some people may get out of the habit of attending Mass and into a new habit of not attending, but he said there was a flip side to that, with some people being drawn more to prayer and the church because of the economic, social and health threats of the pandemic.

“Is it a concern? Sure it is. But I also think some people are beginning to discover a little bit more about their faith,” he said.

Biernat said his parish no doubt relies on Easter contributions, and that “the Lord will see us through.”

“People seem to step up to the plate,” he said. “Yeah, it will be a challenge at the moment but we’re going to be OK.”

Biernat also said he anticipated St. Gregory’s regular Mass attenders would return to church in droves once it is safe to do so.

“The Eucharist and Mass is just part of who they are, and if anything, this is going to create a greater hunger for them and a greater love for the Mass,” he said.

The current unavailability also could create a deeper appreciation for the Mass among people who previously had stayed away and now find themselves needing it.

“It’s one thing knowing Mass is always available and choosing not to go,” said Biernat. “It’s another thing wanting to go and finding out it’s not available.”