Bob Ray was the youngest of nine children in South Buffalo. When he was small, as it often goes with a big family, his older sister Mary played a major role in helping to bring him up. A half-century later, when Mary became ill, Ray moved home from Boston to be around to help.

If she taught him one thing, it was the power of gratitude.

It is why he is now a familiar presence on East Avenue in Lockport, one of countless communities all but shuttered by the pandemic.

On cold days, Ray bundles up in layers that often include a turtleneck, a Sabres shirt and warm boots. He slides a big sign over his shoulders before he walks the sidewalk for hours in front of Scripts Cafe, providing living proof that it still offers takeout.

People who need to be out and about recognize him. They nod as they stroll past or casually honk their horns, assuming he is a stalwart employee of the café.

He is not. What brings him there is a deep sense of thanks.

Long before the threat of Covid-19 closed off the café's "sit down" business, Scripts made sure that Ray – in a new city – stopped feeling like a stranger.

“This place,” he said of the cafe. “They adopted me pretty good.”

Ray, 68, was gone for most of his life from Western New York. More than 50 years ago, he graduated from St. Francis High School in Athol Springs. As a young man he was drafted into the Army, spending three years with the 82nd Airborne Division before coming home to earn a degree from Niagara University. 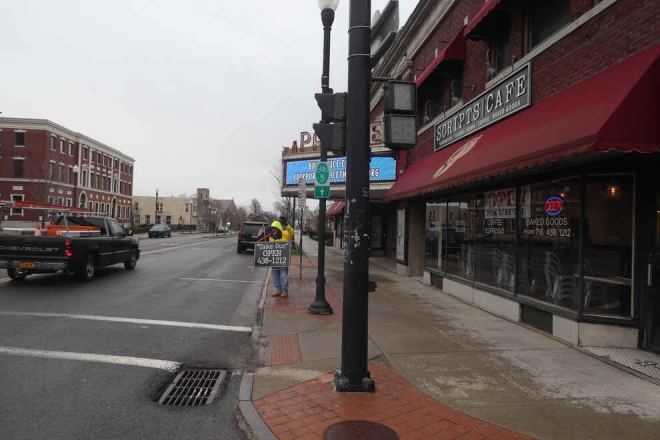 Bob Ray on a raw day with his sign, outside Scripts Cafe. (John Hickey/Buffalo News)

Those were harsh years for the Buffalo economy. Ray left the region to find work as a purchasing agent in New York City, and eventually in Boston. He doubts he would have returned, but his older sister Mary, in Hamburg, learned she had Alzheimer’s disease.

Ray had stayed close to her over the years, and he always remembered how she looked out for him. He is a lifetime bachelor who never had children, and Mary is at the heart of the way he defines family.

More than a decade ago, he retired and came back to help care for his sister. Bit by bit, her condition grew worse. “She had regressed dramatically,” Ray said, which led to her move last year into 24-hour residential care at Lockport’s Briarwood Manor.

The shift did not change the brother's loyalty. Ray rented a small place of his own in Lockport, and he showed up every day to visit Mary. He often drove her to the nearby Frey’s Tasty Treat, where Mary always wanted the same thing – two scoops of peanut butter bon bon ice cream in a dish – while Ray sipped on a coffee from Tim Hortons.

"He was very good to her," said Nanette Frey, a co-owner, who would wander out to chat with them at a picnic table.

'A Buffalo guy' lost to Covid-19: 'He deserved a better ending'

That routine was turned upside down three weeks ago. Briarwood – worried about the safety of its residents – ended access for visitors, including family, until the threat of Covid-19 recedes.

His sister, he said, is an extraordinary person. He described her as the glue that for years held their family together, an aunt who maintained close ties with a legion of nieces and nephews – an affinity for children that defined her career.

For 35 years, she was a nurse at the old Children’s Hospital. Without kids of her own, she put her heart into her work. To her youngest brother, it is a cruel twist that someone so selfless – finally with some time to breathe – would be afflicted with such a hard disease.

“It’s a shame,” Ray said, “but she has trouble putting together an entire sentence now.”

Months ago, as a newcomer in Lockport, he found himself with plenty of time to spare. His regular walks to the library took him past Scripts – the cafe's name was inspired by the neighboring Historic Palace Theatre – and he liked the warm look of the place.

One day, he popped in to use the restroom. The youthful staff was cordial, and he noticed a few other regulars who seemed to be shooting the breeze.

“I asked if I could just come in for coffee, and they said sure,” Ray recalled.

Soon, he looked forward to that stop as an everyday thing, usually before he made his daily visits with Mary. He would head for the counter and buy his extra-large black coffee with one cream, while the young servers always were glad to see him coming.

This was a cure for solitude, refilled upon request.

The pandemic, at least temporarily, separated him from Mary, making his time at Scripts even more important. He happened to be there when the decision came to close the dining area. The owners quickly shifted into takeout only, and as Ray put on his coat, he understood the larger danger to the business.

He appreciates the young employees at Scripts, and he knew the new restrictions would force many places to close down or lay off staff. He walked out thinking about the quiet difference Scripts made in his life.

Ray is old-school, a guy who still carries a simple flip phone, and all of it fit into his way of saying thanks. He took a ride to X-press Signs in West Seneca, and he put in an order. He bought a custom-made sign he could strap around his neck, with these words as the central message:

Back in Lockport, he went straight to Scripts and offered a proposition. He asked for an OK to walk the sidewalk with the sign throughout the day, and he emphasized he wanted no payment in return. Amid struggle, the whole point was helping the place sustain its business and hang onto its employees, and all Ray needed in return was a chance, now and then, to warm up.

Co-owners Nicole and Johnny Kong were stunned. They said sure, not fully realizing how serious Ray was. He tries to show up around 6:45 a.m., then often sticks around for 11 hours or so. The appreciative staff gives him coffee whenever he needs it, and at lunch he receives his favorite meal – a grilled ham and cheese sandwich.

“He’s been a very good customer,” Nicole Kong said, “and we couldn’t be more thankful.”

As for Ray, not so long ago a stranger, he turns to the lesson always modeled by his sister.

"I didn't know a soul in Lockport," Ray said. Now he offers soul, to go.