In an effort to stretch the supply of the N95 masks that are regarded as the gold standard for protecting health care workers from the Covid-19 virus, Eastern Niagara Hospital in Lockport began reusing them Friday after sterilizing them with hydrogen peroxide.

The major hospital groups in Buffalo have their doubts about the procedure, which was approved last weekend by the U.S. Food and Drug Administration.

But Eastern Niagara, which so far has no confirmed Covid-19 patients in its facility, went straight ahead.

"We are in unprecedented times," Eastern Niagara President and CEO Anne E. McCaffrey said. "If we have the influx that's possible, without this sterilization process, we would certainly be concerned about our volume running low. It's very difficult, as everyone knows, for the hospitals to get the supplies of N95s that we need."

McCaffrey said staff members will wear a single N95 mask per shift, with a typical surgical mask over it.

"Those are not in short supply," McCaffrey said. "They'll be changing the surgical masks throughout the day, but their main N95 that they wear under their surgical mask will protect them, and then at the end of their shift we'll be sterilizing those."

According to a letter on the FDA website, the procedure was developed at Battelle Memorial Institute in Columbus, Ohio, which envisioned taking shipments of used N95s from other hospitals and decontaminating up to 10,000 at a time in a special chamber.

But Eastern Niagara will use a sterilizing machine it already owns to mist and dry up to 50 masks at a time.

"They hang up in a hydrogen peroxide mist that goes over the mask. Then it dries after a certain period of time," McCaffrey said. "We're  doing it at the end of every shift. They have to aerate for one hour after the cycle is completed." 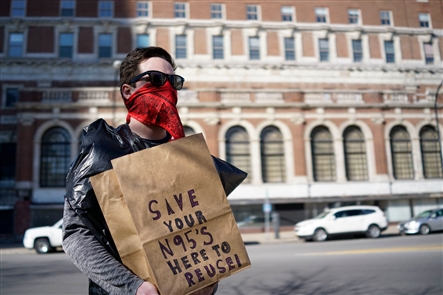 A marcher at a union rally in Niagara Square April 2, 2020. (Derek Gee/Buffalo News)

"We're trying to see the efficacy. There's a couple of things we've got to make sure of," said Mark Sullivan, CEO of Catholic Health System.

"The padding around the nose, we have to make sure it still completes a seal," Sullivan said. "We will test that, but the safety of our associates is of the utmost importance, so we would need to see if there's any degeneration or decomposition of the masks structurally that breaks that seal. We will be testing that and other methods of sterilization as well."

"The FDA is saying right now you can do the sterilization five times," McCaffrey said. "If we believe the N95 mask has been damaged, then we will discard it."

The Lockport hospital's supply of N95s "will hold out a lot longer now that we're able to do this process," she said.

"If we weren't using the surgical mask over the N95 and if the staff were having to put on an N95 every time they walked in and out of a room and had to throw the other one out, you could go through dozens per shift per patient," McCaffrey said.

“They come out and they’re absolutely intact. The elastics are good," Sellick said. "We’re hoping we don’t have to go that far but if we do, we think it’s more important to have protection available than not."

But so far, the hospital group has not authorized the reuse of masks.

"The only way for this to be realistic, we would have to do at least a couple hundred at a time, because that’s the volume that we would go through," Sellick said. “We think we’re still on the upslope in numbers of cases. What might be good today, if we were having this discussion again next Friday, might not be quite as good."

In the hunt for N95s, Sullivan said, hospitals must beware of shoddy substitute masks.

"You're seeing some masks coming out of foreign countries that are either knockoffs or not true N95s, and we do not want our staff with such masks," Sullivan said.

By creating closed Covid-19 units, including the use of the St. Joseph Campus in Cheektowaga as an exclusive Covid-19 hospital, Catholic Health has been reducing the "burn rate" of masks and other personal protective equipment.

"The staff is able to use what they need, but it's used in an environment that is more controlled than if (Covid-19 beds) were throughout the whole hospital," Sullivan said.