Louis Shafer, music teacher and choral director at Frontier High School in Hamburg, minced no words when it came to the effect school closings amid the coronavirus crisis have had on him.

“I miss the kids,” he said. “I miss the team spirit that comes with what we do every day – with the students, with my colleagues and with the music.”

Rather than wallow in negativity, Shafer – a graduate of SUNY Fredonia in his 23rd year at Frontier – decided to embrace the next best thing to being there. He gathered his students together digitally by creating a “virtual choir,” for which he assembled and recorded his students remotely.

“I must say, I wasn’t the originator of the idea,” Shafer said. “Eric Whitacre, a very popular choral composer of late, came up with the idea a few years ago. He had a great deal more participants – in the thousands – as well as more technological staff to work on it and a much bigger budget, I’m sure. But he was the originator.”

Appearance of these virtual choirs has increased as the pandemic continues – a high school in Amherst engaged in a similar project over the last week. Shafer embraced the concept, knowing his students needed him as much as he needed them during these dark days of disconnection.

“Since our student interaction, curriculum, assessment and repertoire are extremely limited during this time, I thought it might be something educational and interesting for the singers to do from home,” he said. “Plus, it gave the students a moment to connect with their tribe, albeit online.”

“I actually brought it up before we left school – just in case, at that point – and they seemed to like the idea. The students in the more advanced groups grabbed onto it right away and seemed to really enjoy the process and the product. I have others that I’m compiling now from the other ensembles.”

No one involved was fully prepared for the public response to the end product – a soul-stirring version of Frank Ticheli’s “Earth Song” – once Frontier High School Principal Daniel Charland shared the multi-layered recording via social media.

“Virtual choir from Mr. Shafer and company,” Charland tweeted. “60 kids singing from their homes. This warms the soul in times like these. Stunning talent and amazing dedication.”

https://t.co/SMSlMGskmT Virtual choir from Mr. Shafer and company. 60 kids singing from their homes. This warms the soul in times like these. Stunning talent and amazing dedication. @DrRichardHughes

“I was quite surprised by the reaction,” Shafer said. “This was never meant for public consumption – it was just an exercise for the students. I guess I just have a very proud – and eagerly tweeting – principal!”

Frontier seniors are given the choice by Shafer to repeat a piece from their time in high school. “Earth Song” was something they sang a couple years ago and asked to sing again so their younger peers would experience it, too.

“Most of the group had to learn the piece from scratch before they sent me their recording,” Shafer said. “The seniors loved it so much, and they may not get a chance to perform it again. So I thought this might help mend that pain in their hearts.”

There were logistical problems to overcome, naturally. How would the singers be able to perform in sync, to hear each other, to harmonize and stay in time? How would Shafer take all of these raw materials and edit and mix them into a pleasing, coherent whole, while retaining the deep soulfulness at the heart of the composition?

“I sent the students a backing track and had each sing along as they recorded themselves on a phone,” Shafer recalled. “We made sure that the track couldn’t be heard, so all we could hear was the solo voice.  Then they sent me an MP3 via Google Classroom and I edited each of them and synced them up using the GarageBand app on MacBook.

“A common problem with adolescent voices is balance, as each singer’s voice is growing at his/her own rate. In the classroom, we can adjust this on the fly with a simple conducting gesture, but using the software, I had to address each recording individually. This took many hours and it’s certainly not perfect, but I sent what I had back to the singers and they were able to listen and critique their performance, just like we do in in-person rehearsals.” 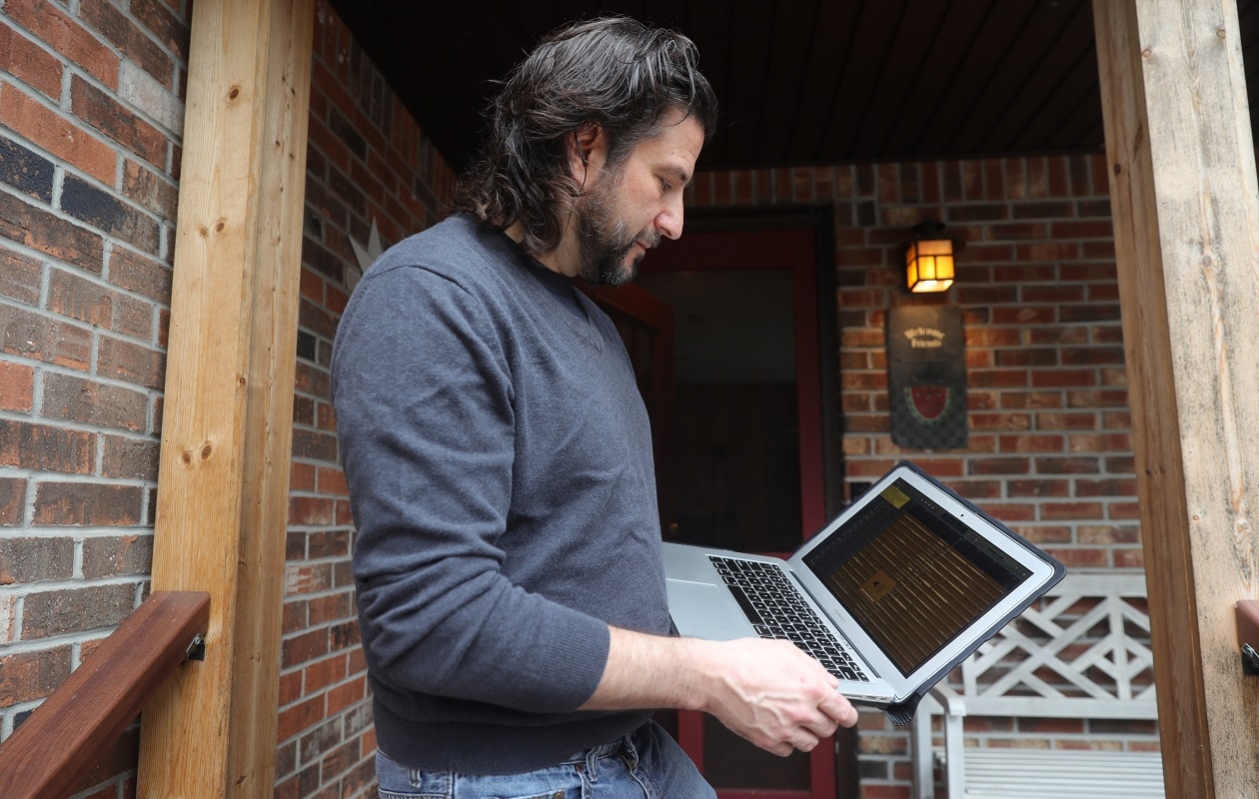 Though Shafer insists the end result pales before “the real thing,” he was confident the pluses would outweigh the minuses. Imperfect as the process proved to be, Shafer is already considering future virtual choirs with his students.

“The goal would be to have them send me a recording of their beautiful voices while they view a video of me conducting,” Shafer said. “The relationship between conductor and musician is a powerful one for all involved.  This online idea certainly doesn’t come close to the opportunities for education, growth, assessment, interpretation, musicianship and camaraderie that is achieved in the music classroom, but for now, it’ll have to do.”

Though he’s pleased to have the opportunity to interact with his students in the only way possible at present, Shafer can’t disguise the feelings of wistfulness that surround his hopes for the future.

“I hope, for the kids’ sake, that we can make music together again,” he said. “Of all the critiques I received from the singers, the one that touched my heart was from a senior: ‘I got teary, Mr. Shafer,’ they wrote to me. ‘What if I never get to sing this beautiful music with these people again?’”