He walked into the house I shared with my best friends, on Central Avenue in Fredonia, across the street from the entrance to SUNY Fredonia, where we were all pursuing degrees and playing music. Norris was still in high school, and he arrived with two of his fellow Kenmore West seniors, one of whom was my roommate’s younger brother, drummer Eric Starr. They brought gear, and we set up in our communal living room and jammed.

My first thought was that Norris looked like Jim Morrison, and not just because he was wearing a Doors T-shirt. He was a little bit quiet, intense and a touch brooding. He stepped to the mic and we played a boozy take on, I believe, the Doors’ version of Willie Dixon’s “Back Door Man.” I remember thinking Norris looked much cooler than I did, with my New Wave mullet and, quite likely, U2 T-shirt. This would have to be addressed.

A few years later, I’d made the move to Buffalo, ditched the tattered U2 T, and Norris had become a close friend. It became abundantly clear to me that the shy, intense kid I’d met at Fredonia was not the “real” Norris. The guy who was now my friend was in fact one of the funniest human beings I’d ever met. As in, “You should take this act on the road,” wet-your-pants funny.

He started the garagey power-pop outfit Girlpope, and we shared many gigs at local clubs, and even more house party bacchanals. These were great days, and they tumbled recklessly, one into another, for the duration of the '90s. All the while, we never stopped for long enough to notice that we were, like it or not, growing up.

Like so many great '90s Buffalo bands, Girlpope dissolved despite their immense promise. Norris pursued a solo career, assembled a band called the Backpeddlers, wrote some incisive pieces for various local alternative newsweeklies, started a family and stayed a close friend. He and the rest of Girlpope were slated to perform as part of our Gusto Vinyl Happy Hour series at the Sportsmen’s Tavern this month in a celebration of T. Rex’s evergreen “The Slider” album. That show, like every other gig in most of the world, has been postponed. (It will happen, when it can, and Girlpope will still be on the bill.) 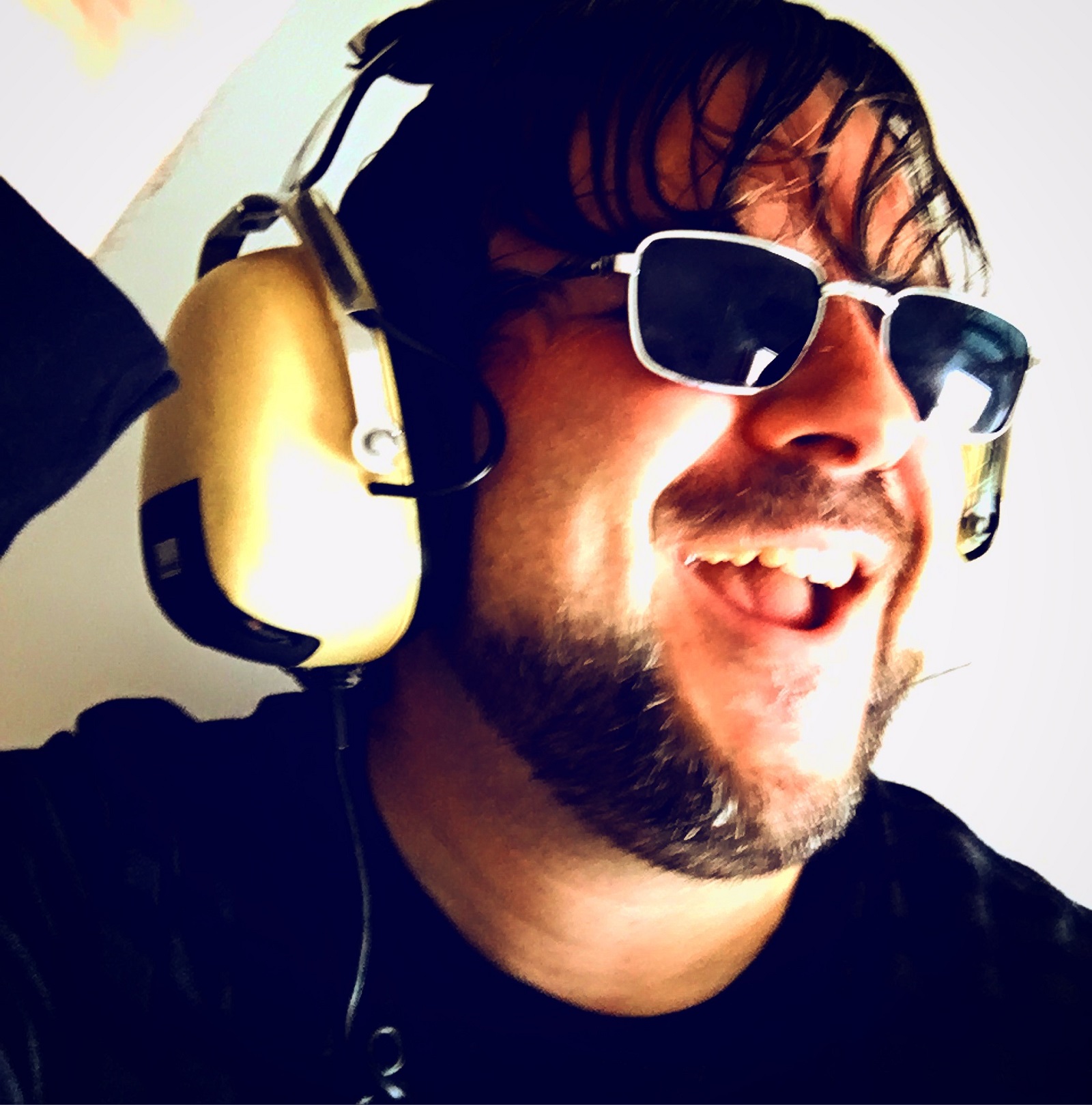 Mark Norris has taken the enforced shutdown of the live music scene as an opportunity to release some new music. (Photo courtesy Mark Norris)

Norris has taken the coronavirus crisis and its attendant downtime as an opportunity to release some new music. I caught up with him this week, from a proper social distance, and we talked about bands, albums and our hopes for life after the crisis. (Note: He still looks cooler than me. Hmmmph.)

Question: You were slated to perform with your old bandmates in Girlpope as part of the Gusto Vinyl Happy Hour series. Is it fair to say Girlpope getting back together to play a show kicked the planet off its axis and set in motion the current pandemic?

Answer: I’d say that’s fair! (laughs) We have a history of playing gigs wrapped around infamous occasions. Our big record release party took place the same night that the Sabres lost the Stanley Cup. I suppose this pandemic makes that pale by comparison … unless you’re a serious Sabres fan.

I’m looking forward to the T. Rex show being rescheduled. Marc Bolan was a huge early influence on me. I’d imagine a lot of people aren’t familiar with them outside of “Get It On (Bang a Gong)” or “Children of the Revolution,” but they have so many other great songs, it will be a real treat to play them for a live audience.

Q: You just dropped a new double-sided single that pairs you with the Irving Klaws. You have a long history with them, including a killer set covering Creedence Clearwater Revival during last summer’s Buffalo Woodstock show at River Fest Park, and a slew of Halloween shows at Nietzsche’s. Tell me about the synergies between you and the Klaws.

A: Well, I’m a fan first and a participant second. From the first moment I saw them play, I was enamored of their mix of garage, rockabilly and psychedelia.

Girlpope and the Klaws played a lot together back in the day and we were all friendly. They asked me to do guest vocals at one of their Halloween shows many years ago and it’s become a tradition I treasure. Each year at Halloween, they pick a theme and really concentrate on giving the audience something wildly visual and surprising to listen to.

I thought they would be perfect to play Creedence tunes with, because they really understand that music and know how to pull something unique out of very familiar tunes. Any time you can see a group of musicians who have played together for a long time, it’s a great experience. If you observe carefully, you can see the unspoken communication happening on stage: the sideways glances, the inside jokes. It’s a delight to watch.

Q: These two new tunes have a beautifully raunchy, garage-rock vibe. Tell me about the recording. The where and when and who.

A: I wrote the song “Seven” with the idea of giving it to the Klaws to perform. I wasn’t playing out much at the time and I thought I might try to write for other people for a while. I play with them frequently, so it didn’t seem like an outrageous idea that maybe we could do something original together.

Of course, we wanted to keep it raw. We ran through the song a couple of times and then laid down the whole thing in a single session with Marc Hunt at Black Rock EPS. Marc’s an amazing engineer and unflappable when it comes to fielding tough requests in the studio. We recorded it in 2018 and I planned to release a 7-inch single, but things got too busy. Now, with all that’s going on, I felt a new urgency to get this out into the world.

Q: The second track on the digital single, “Bumbu,” has a real Ennio Morricone vibe – kinda like surf music meets spaghetti western. It has some outstanding guitar work from Ben Vaughn. Tell me about the writing of this song, and some of the influences behind it.

A: After “Seven” was recorded, I had an idea to do a full album of me writing and singing a variety of musical styles with different groups. I laid down about seven or eight more songs with different Buffalo-based musicians, each with a different vibe or sound – country, soul, folk; we attempted lots of genres.

“Bumbu” started out as a riff I strummed on a classical acoustic guitar. I was attempting to write something like a track off of Love’s "Forever Changes", but it turned into a Morricone tune. I attempted lyrics for it, but they verged toward the comedic and I didn’t want that for the song.

The Klaws and I did a second session and cranked it out quickly, but there was still something missing. As luck would have it, I opened for Ben Vaughn when he came to town. He’s someone I’ve always admired, musically, and having done all the instrumentals for "Third Rock From the Sun," "That 70s Show" and more, he seemed like a good person to ask for advice. At first, I’d hoped he might mix the song, but he offered to put down a guitar track on the song instead and it absolutely makes the tune.

Q: How are you adapting to the pandemic? In what ways have the rhythms of your life – and family life – changed?

A: I’m listening to a lot more records! Sealed albums I had are getting ripped open and played with great joy.

Q: What do you hope we might’ve learned when we finally come out on the other side of this?

A: There are many big-picture things that I would love to see change: healthcare, poverty, hunger. Those concepts are too weighty for me to think about during a crisis, so I’m thinking locally.

The lockdown has given me the opportunity to discover and rediscover the work of many Buffalo-based artists. It reminded me of how lucky I am to live in a town with such a robust arts scene.

I would hope that we all might learn how to better support our homegrown talent. I don’t know many artists in town who can live off their creative work. They balance careers and creativity. I would love to see a financially supported arts organization that could help provide insurance, small grants and studio space for struggling artists. There are a few in town, but they barely get the money they need to stay afloat, much less provide independent support to others. When this is over, I’d be very interested in exploring ways to do that.