Joseph Clark was delivered to his wife’s nursing home so he could die at her side.

As he was wheeled into her room Friday afternoon, the first words he said were, “Hi, I love you.”

“I kissed him right on the mouth,” Charlee Clark said.

Two days later, Clark left this world holding his wife’s hand, with his daughter, Jennifer Page, cradling him in her arms.

Page had insisted her father, whose kidneys were failing, be moved from Brothers of Mercy nursing home in Clarence, where he had been since last June, to Garden Gate nursing home in Cheektowaga, where his wife was admitted in December. Two strokes and kidney failure had brought her there.

On March 23, Clark’s condition took a turn for the worse.

Despite the statewide ban on nursing home visits because of the Covid-19 pandemic, Page was permitted to enter the Brothers of Mercy nursing home the next day to be with her 76-year-old father. A "compassionate care" exception was made. 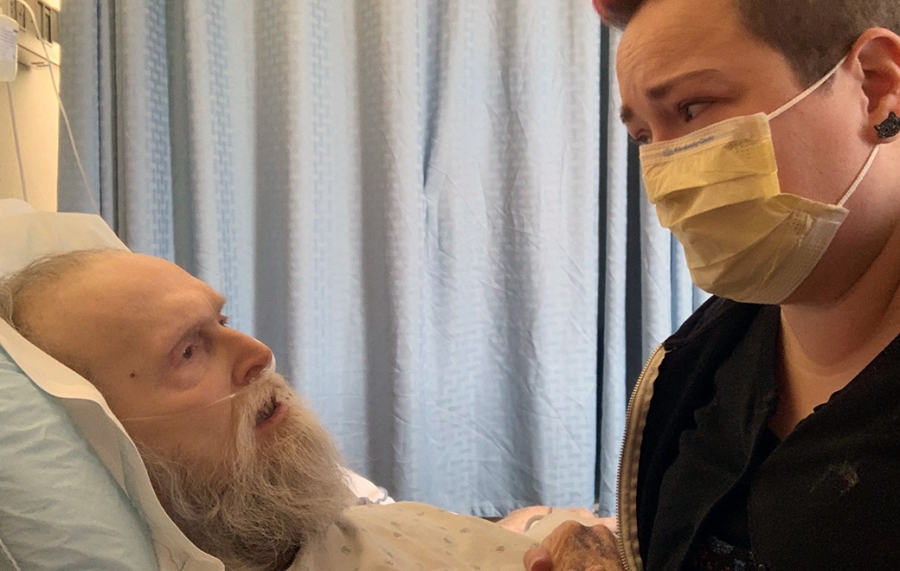 When Clark, a retired machinist and Vietnam-era Navy veteran, told his daughter he was worn out and did not want to pursue dialysis, Page said she supported his decision. He wanted to be made comfortable.

But no medication could bring him the comfort of spending his final days with his wife, whom he had known since childhood in North Tonawanda.

For Page, the next step was obvious. Page, who is known as an advocate for nursing home residents, had to find a way to have her father transferred to Garden Gate.

Her father had previously been a resident at Absolut Care of Aurora Park nursing home, which was rated as one of the worst ranked facilities in the state. Upset at the care he and other residents had received there, Page had organized protests in front of the facility.

“I was ready to go into full activist mode,” Page said.

But officials at Garden Gate and Brothers of Mercy worked through the complicated transfer process – which involved Medicaid and Social Security paperwork – and by Friday afternoon, Clark was in a van with his daughter headed to Garden Gate on Union Road.

“They were amazing,” Page said of the staffs at both nursing homes.

Charlee Clark's roommate had died a few days earlier and the bed was available for her husband.

Charlee Clark's social worker at Garden Gate, Amber Wiehe, texted Page: "Getting them together has been my most satisfying work thing to happen all year... it was just the right thing to do."

Garden Gate allowed Page inside to visit her parents, but only after she had her temperature taken and donned a mask, because of Covid-19 precautions.

Using her cellphone, she started calling siblings and grandchildren to give them the chance to video chat and say their goodbyes. Though his condition quickly deteriorated, Clark managed to whisper countless times, “I love you.” 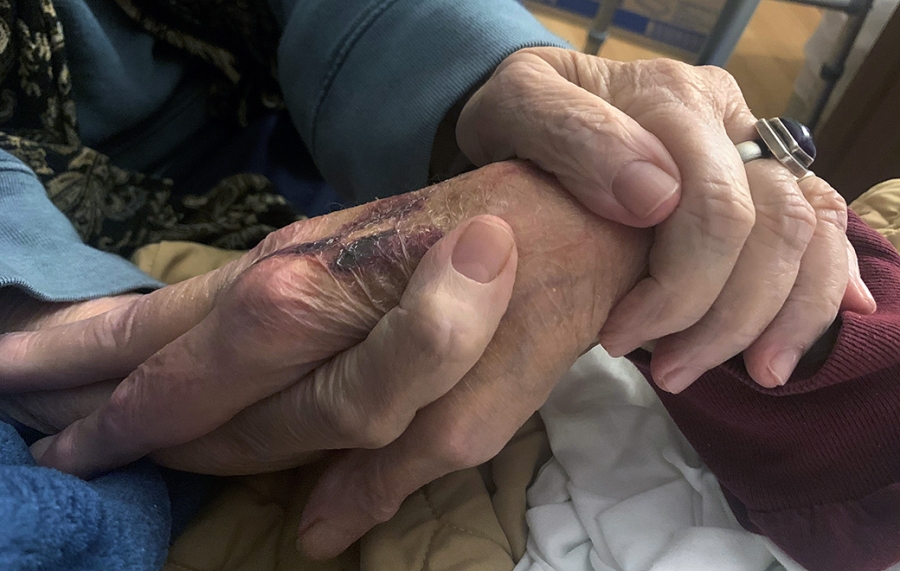 Charlee Clark holds the hands of her husband, Joseph Clark, at the Golden Gate nursing home in Cheektowaga shortly before he died Sunday, March 29, 2020. (Photo courtesy of Jennifer Page)

In his last hours before he died at 8:32 a.m. Sunday, Clark’s daughter and wife surrounded him with their love, saying “I love you,” over and over.

“You know he told me a joke every day we were together,” said Charlee Clark, 74. “We never went to bed upset at each other.”

Page said she was holding her father so closely that she happened to notice her sparkle makeup was falling onto his face. When she apologized, he comically raised his eyebrows.

And in his final moments, there was elegance. Page had brought music. From a small speaker beside Clark’s bed, Italian singer Andrea Bocelli sang Joe’s favorite opera song “Con Te Partiro,” which in English means, “with you I leave.”

At that moment, a nurse entered the room and administered morphine to calm him.

A moment later, mother and daughter began to sob.

But now they are counting their blessings for those precious two days together.

“I have moments when I get sad and I say, ‘No, this was a miracle,’ ” Charlee Clark said. “I’m writing thank-you notes to everyone who helped.”

And she is doing it with joy as she recalls memories of her husband, including the silver sparkles on his face.

“Joe sparkled right to the very end,” she said.

Besides his wife and daughter, Clark is survived by another daughter, Jodee Riordan; three sons, Jason, Joshua and Joseph; and nine grandchildren.

Because of coronavirus precautions, the family cannot hold the funeral service they would normally.

But as a special tribute to her father and show of love for her mother, Page has organized a motor vehicle procession involving as many as 20 cars. The motorcade will slowly drive through the parking lot of Garden Gate at 11 a.m. Thursday.

The dining room’s window faces the parking lot and Charlee Clark will be inside looking out. Just outside the window there will be a bagpiper who will play, “Amazing Grace.”