A staple in Buffalo's cycling community is taking measures to encourage people to enjoy the outdoors while still practicing proper social distancing.

Slow Roll Buffalo released 10 mapped routes from its 2016 season with step-by-step directions for bikers to follow. Each ride is a beginner route of about 10 miles, perfect for those new to the sport or who haven't biked in a couple of years.

Instead of traditional large group outings, the organization is promoting the individual rides and is hopeful they will improve participants' mental and physical health during the pandemic.

It's also posting videos to its new YouTube channel touting rides as short as 2 miles around various parts of the city. Each video includes an interview with community members, a local business or organization pitching in to combat the coronavirus – one video, for example, includes an interview with Kevin Ford of Buffalo Distilling Co., which has begun making hand sanitizer.

Slow Roll Buffalo co-founder Seamus Gallivan said the social distance routes were something simple the organization could do right away to help the local community.

"The first words of Slow Roll's mission are connecting communities, and the bike is just a vehicle," Gallivan said. "We remain focused on that. We can evolve the ways we do it and meet the demands of the moment, we needn't have a massive group bike ride to fulfill that mission of connecting communities."

The routes include the History Museum in Delaware Park, Naval Park, Niagara Square, Riverfest Park and South Park in addition to five previously announced rides through parks in the Buffalo Olmsted Parks System – Cazenovia, Delaware, Front, Martin Luther King Jr. and Riverside. The directions for MLK Park, for example, are broken down in this manner: "Start in MLK Park / North on Fillmore / R on Kensington Ave / R on William L Gaiter Pkwy / L on E Delavan ... " 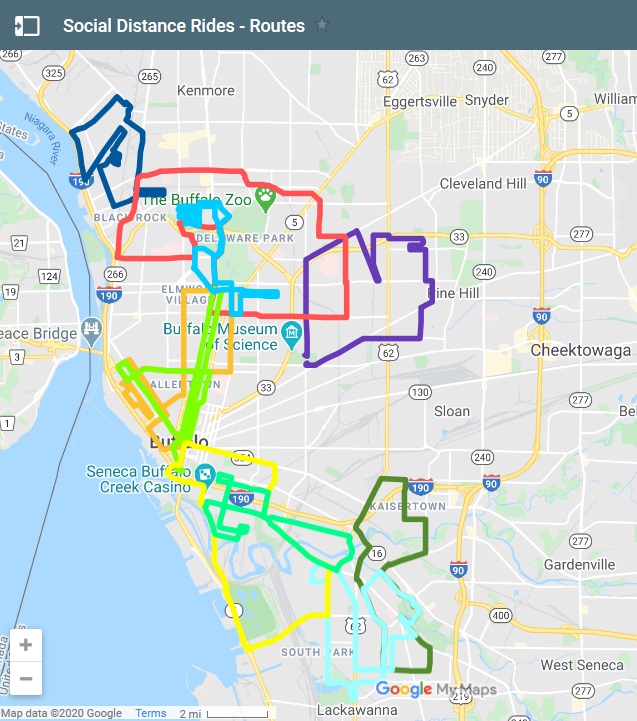 But before releasing the maps, Gallivan said Slow Roll reached out to Mayor Byron W. Brown and other elected officials, as well as a team of doctors at Independent Health to make sure it was safe for participants to ride through Buffalo's parks. It is indeed safe, as Buffalo parks are open for passive use, but participants are still required to stay 6 feet apart from one another.

Gallivan is encouraging riders to snap pictures or videos of their ride and share them with Slow Roll's public Facebook group with the hashtag #SociaDistanceBikeRide. Whether riders use one of the social distance routes or share their own route, he hopes the pictures will unite the community and encourage more people to get outdoors.

That's exactly what Karen Huffman has been doing. The 58-year-old has been a volunteer with Slow Roll since 2015 and completed the Front Park social distance route with another volunteer last week. She said the route was a lot of fun and posted a picture to the group.

"We get to see each other's rides and encourage each other and remind each other to just keep safe distance even if we go out with friends to keep six feet on a bike," Huffman said.

Due to the pandemic, Slow Roll's Schedule Reveal Party at the Broadway Market on April 6 is postponed and the future of its season of 26 free group rides, which stretches from May through October, is questionable, Gallivan said. New mapped routes will be posted in the future and Gallivan hopes to incorporate live streaming so that residents who aren't able to leave their homes can still enjoy riding a bike virtually.

Gallivan said Slow Roll will continue to work to ensure the safety of the cycling community, even if that means no more solo rides. As the weather gets warmer and more people are inclined to get outdoors and ride their bikes, he encourages them to be mindful of social distancing protocol and stay 6 feet apart.

"Once it gets to 60-plus degrees there's going to be a temptation for people to ride in groups and gather, and we're not going to be a part of that," Gallivan said. "We're going to stay following the lead of our elected officials and public health professionals."