With consumers warned to stay home amid the coronavirus outbreak, demand for Instacart deliveries is higher than ever. At the same time, the risk of Instacart workers catching the virus is higher with every minute they spend on the job.

After weeks of being denied hand sanitizer and increased compensation, workers announced plans for a strike last week.

Instacart strikes don't look like teacher strikes or auto worker strikes. There is no picket line, no walkout, no factory left idle. So it is hard to tell how many Instacart workers in Western New York are participating in the strike, which began Monday.

But, according to at least one shopper who was still taking orders, it was clear there were fewer Instacart shoppers on the job Monday, judging by how busy the app was. She was being assigned up to three orders to shop and deliver simultaneously, which is rare, even during this time of unprecedented demand. Wegmans reported the strike had not disrupted its service as of Monday afternoon. Tops Markets declined to answer.

Instacart changed the app Sunday so that the customer tip portion would automatically default to whatever tip each customer gave in the past, instead of defaulting to the usual 5% of the order amount. The company also extended the deadline for workers infected with Covid-19 to submit for financial assistance from the company.

But it's too little, too late, said Gig Workers Collective, the labor advocacy group that organized the strike.

"We had been asking for hand sanitizer for many, many weeks. But apparently the company is capable of sourcing some with two days of work? Where was this before?" the group wrote on Medium.com. "It’s abhorrent that it took this long for them to act, but on the bright side, it shows that a strike will work to change their behavior."

The change in tip default will likely not make a difference in workers' pay, Gig Workers Collective said. Workers had pushed for a 10% default. And two more issues have gone unaddressed: Workers' request for an additional $5 per order in hazard pay and the extension of the company's sick leave policy to workers with pre-existing conditions and a doctor's note.

"The average pay per order is well under $10," Gig Workes Collective wrote. "Workers should not be risking their lives for pocket change." 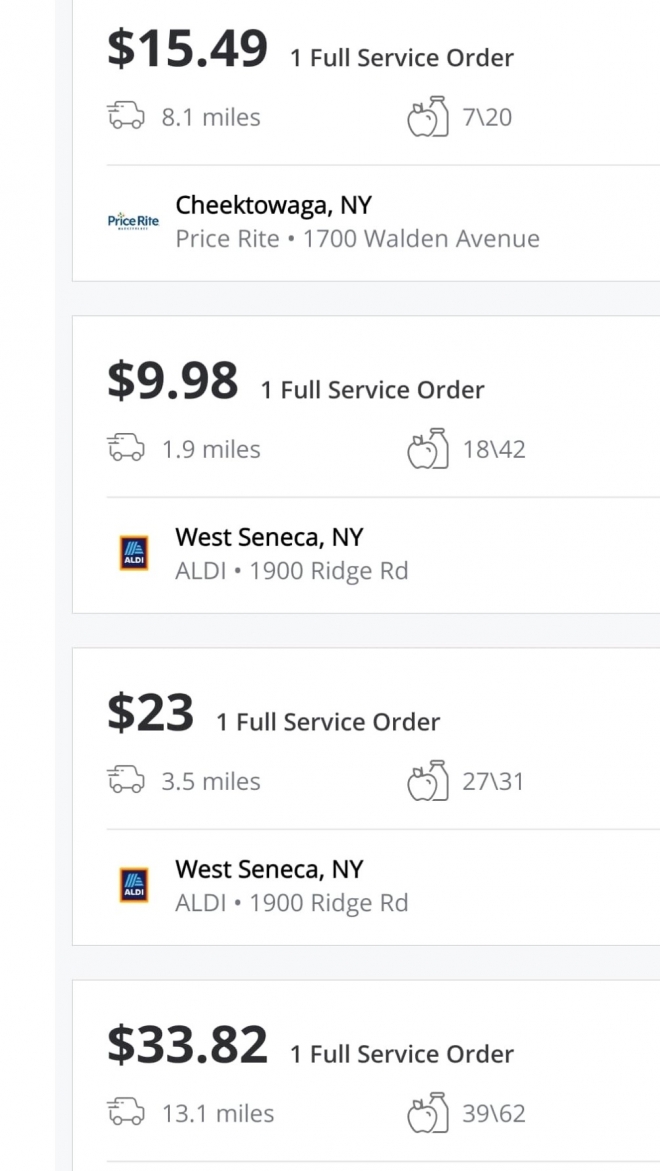 A screenshot of the Instacart shopper app Monday, showing orders that were available for shoppers to fill. The first order would consist of 20 items to be delivered for a total of $15.49 plus tip. The delivery would be made roughly eight miles away from the store.

Instacart shoppers are independent contractors, not employees. For them, a strike is better described as a decision among a number of workers to stop doing business with the company in order to negotiate better terms of the deal. The contractors are not unionized.

Instacart shoppers asked not to be identified, saying team leaders informed in-store Instacart workers that anyone who talked to the media about the strike would put their jobs in jeopardy.

One Instacart shopper from Buffalo with an immunocompromised child said she stopped taking Instacart orders a few weeks ago in response to the Covid-19 outbreak. She said she has seen in-app "boosts" that make each order more profitable to deliver, but it's still not enough of an incentive to take orders right now. Plus, with so many products out of stock, orders are more difficult and time-consuming to fill, she said.

"You can't find gloves or masks anywhere and I can't chance going into different stores and touching everything," she said.

Instacart wants the benefits of having employees, without the responsibilities, the shopper said. If workers were truly independent contractors, they would be able to negotiate their own rates of pay, among other things, she said.

"We are the same customer service people as an employee dealing with people inside a store," she said.

Not everyone is on board for the strike. Some Instacart shoppers are excited to stay on the job, saying fewer workers competing for orders means more money for them.

Katie Lane of Hamburg has been shopping for Instacart as a side gig ever since the grocery delivery platform came to Western New York in 2017. She lost what she calls her "real job" in security when the quarantine started, but she has opted to keep working full-time hours for Instacart. She makes nearly twice as much with Instacart as she did at her former job, and is making more than she would make on unemployment, she said.

She has perfected a system of shopping quickly and keeping her customer ratings high, and the recent high customer demand has boosted Instacart's compensation level.

Usually, shoppers with higher customer ratings (Lane has a perfect five stars) get priority order assignments, but that practice has been suspended during the current surge. Last week, Lane brought home $930 for working 30 hours, according to an app screenshot she shared with The Buffalo News. She was paid about $576 by Instacart, made an additional $353 in customer tips in the app, and another $100 or so in cash tips. She delivered 27 orders.

"Customers have been amazing. I consider their generosity my hazard pay," Lane said. "Aside from the money, they have all been so nice and grateful."

With lupus and fibromyalgia, Lane's immune system is compromised, but she is careful and stays clean, she said.

"I don’t disagree with all the reasons they want to strike, but I’m not employed by Instacart, I’m employed by me," Lane said. "They forget that. I can get protective materials for myself if I deem them necessary."

Besides, she said, "striking never works."

"I’ve seen them try this dozens of times for one reason or another," Lane said. "There will always be people like me who do need and want the money. We’ll always work. Especially now with such an uncertain financial future."