The 58-year-old West Seneca woman arrived at Mercy Hospital on March 19 with a slate of telltale Covid-19 symptoms. She had come straight from her doctor’s office. Tests there revealed that – in addition to shortness of breath, chest pain and a mild temperature – her blood oxygen had sunk well below normal levels.

But even after a battery of respiratory tests came back negative, Mercy staff could not screen the woman for the coronavirus.

Such incidents have become commonplace in the three weeks since Covid-19 began to shake the local health care system. Faced with widespread transmission and a nationwide shortage of test supplies, New York State this week urged public health labs to restrict their tests to health care workers and certain types of high-risk patients.

The protocols reflect a strategic shift occurring both in New York State and other emerging hot spots: Public health officials have abandoned attempts to identify and isolate every individual case of Covid-19 in favor of strategies that instead slow the inevitable spread of the virus. That should help protect hospitals, nursing homes and other critical care settings, they say, from a sudden wave of cases that could overwhelm them.

But the change has also left dozens – perhaps hundreds – of Western New Yorkers in anxious limbo, unsure whether they have a dangerous disease or have potentially spread it to relatives and friends.

“I’ve been telling anybody I was near that I may or may not be positive, but that’s the frustrating part,” said the woman, Patti, who asked The Buffalo News to withhold her last name. “When you tell people, of course they want to know: ‘Was I really exposed or not?’ It makes the decision hard for them.”

Hard decisions are not in short supply these days, though Covid-19 tests certainly are. Public health departments from Minnesota to West Virginia have reported severe shortages of both swab kits and test chemicals in recent days, as demand surges far beyond what manufacturers prepared for.

In response, public health officials – from the World Health Organization down to the state Health Department – have issued new guidelines on who should be tested, focusing on so-called “priority” cases. The strategy is intended to triage and protect the highest-risk patients, reduce the risk of hospital-based infection, and “maintain the integrity of the health care system,” according to guidance published on March 24 by the U.S. Centers for Disease Control and Prevention.

Under new state protocol, testing is recommended for health care workers, law enforcement and patients who live in group settings, such as nursing homes or prisons, Erie County Health Commissioner Dr. Gale Burstein said. It is not recommended or necessary, she added, for people who are only mildly ill, work in non-essential industries or who live in non-congregate settings, such as private houses. 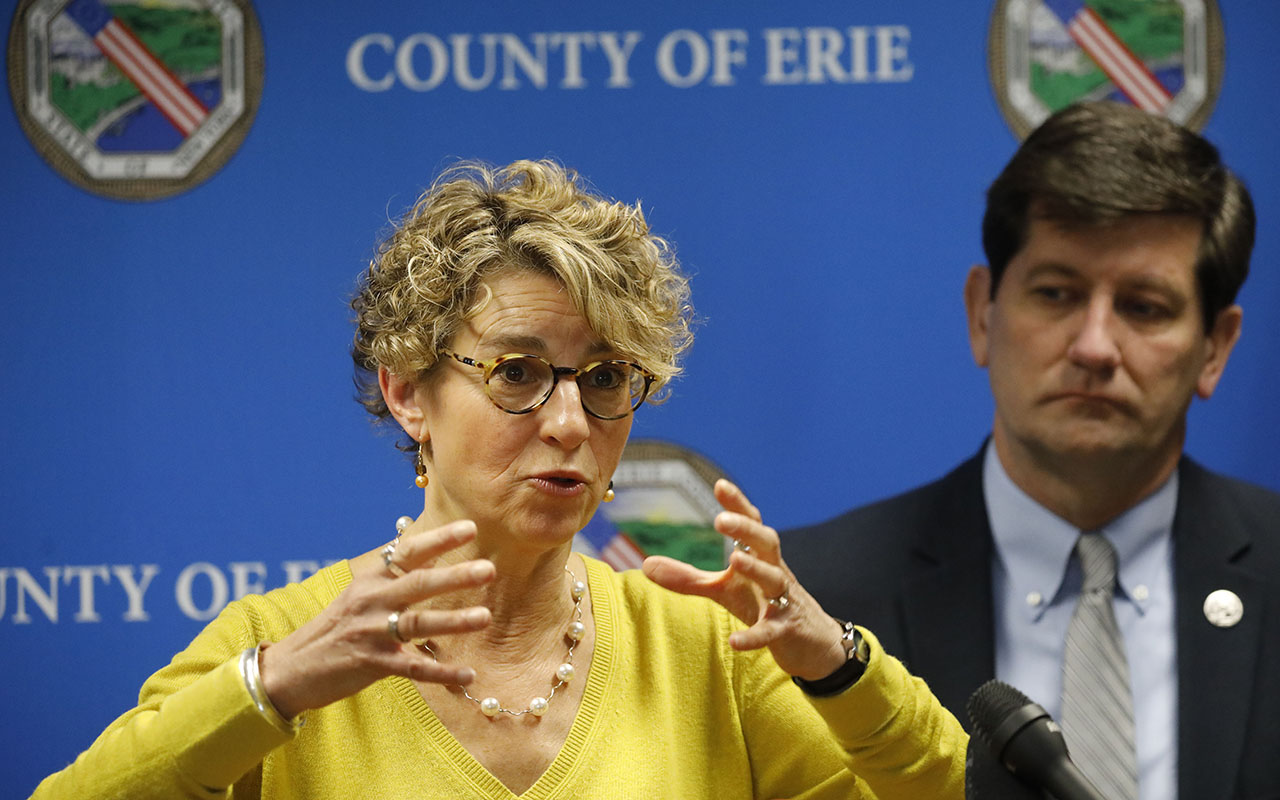 The Erie County Health Department is under the direction of Dr. Gale Burstein. (Derek Gee/Buffalo News)

Testing does not change treatment for Covid-19, because there is no medication or vaccine available for the disease. Instead, targeted testing to prevent spread in high-risk settings, together with measures such as social distancing, isolation and self-directed quarantines, are designed to stretch hospital and intensive-care admissions over a longer period, Burstein explained.

For some people with symptoms, however, that strategy has been a source of confusion and frustration. They describe circuitous calls with Health Department officials, pained conversations with family and friends, and long days of anxiety, punctuated by coughing spells. While the half dozen patients who spoke to The Buffalo News have all self-quarantined and notified close contacts about their illness, all asked not to be named for fear of social backlash.

“It sounds crazy,” said Joe H., who believes he contracted Covid-19 in mid-March. “But people do crazy things in crazy times – and these are crazy times right now.”

Like Patti, Joe first turned to his primary care doctor after developing symptoms consistent with Covid-19: chest tightness, an intermittent cough and a consistent fever between 101 and 102 degrees. While his doctor encouraged him to contact the Health Department for testing, the staff at the agency told Joe his symptoms were too mild to justify a test. He has since self-quarantined at home, taking acetaminophen for his fever and calling his doctor on an almost-daily basis.

J., a Buffalo man who works in a factory classified as "essential," has also stayed home on the advice of his doctor since his girlfriend developed a cough and high fever a week ago. A flu test administered at her doctor's office came back negative.

“The doctor told us not to call [the Department of Health], that DOH would contact us,” he said. “They still haven’t. I’m concerned that my girlfriend still hasn’t been tested, despite continuing to be sick with a respiratory illness.” 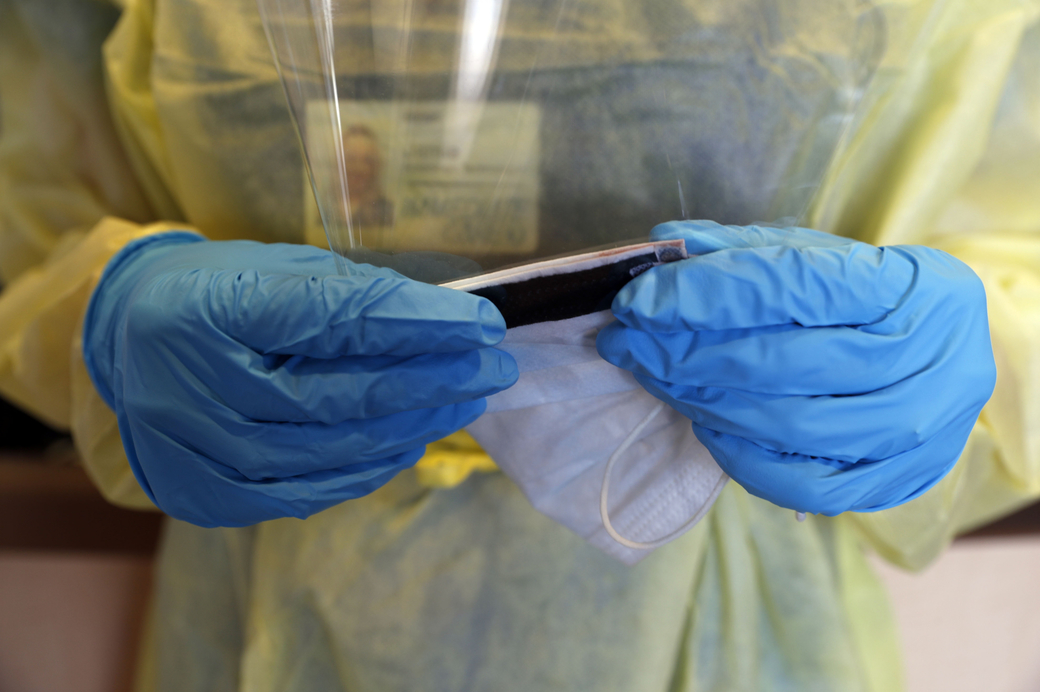 In an interview, Burstein acknowledged the test shortage has frustrated some patients, but stressed that most symptomatic people do not need a test. The county is also attempting to ramp up its capacity in partnership with private and commercial labs, she said.

Both Quest and Labcorp can accept samples for testing, even from patients who don’t meet New York State’s restrictions. But to obtain those tests, patients must go through their primary care providers, who often lack the necessary test supplies and protective equipment.

In the absence of confirmatory testing, Burstein said that people who believe they have been exposed – or who are experiencing Covid-19 symptoms – should behave as if they have the disease: quarantining themselves in their home away from other people, especially the chronically ill or elderly.

Covid-19 symptoms include a fever above 100.4 degrees, a dry cough and shortness of breath. Patients experiencing more severe symptoms – such as trouble breathing, chest pain or pressure, or bluish face or lips – should immediately call a medical provider for advice, according to a Health Department statement.

“We’re asking the community to monitor themselves for signs and symptoms of Covid-19,” Burstein said. “Because as a health department, we don’t have the capacity to monitor everyone at risk.”

Without clearer answers, that’s what many suspected Covid-19 patients say they are doing now. Patti, the West Seneca woman, hasn’t left her home since visiting the hospital, she said, and has sprayed “everything” she touches with Lysol. Cynthia, a retiree who lives with her daughter's young family, has self-quarantined since the Health Department told her she didn’t qualify for a test in mid-March.

In Amherst, 34-year-old Amanda – whose partner is a test-confirmed coronavirus patient – has been isolated since March 13, when her partner received his diagnosis. With symptoms including chest pain, body aches and a persistent cough, Amanda assumes she has Covid-19, as well.

But she’s angry that she never got a test, she said, particularly since some government officials have suggested they are widely available at private labs. She believes that, had she been tested early on, the Health Department could have notified her close contacts about their possible exposure. The agency has since scaled back contact traces.

“When I asked my primary care doctor about getting a test, she acted like I had three heads,” Amanda said.

“It’s frustrating,” she added. “And that’s an understatement.”