Gerry Lederman typically leaves Pompano, Fla., later in the spring, flying back to her Amherst home with her daughter.

Her son insisted this year had to be different.

“She is prime real estate" for coronavirus, Rob Lederman said of his 88-year-old mother. "She’s a two-time survivor of breast cancer and still takes chemo pills. She has everything going against her as far as being susceptible. If she gets this, we may never see her again.”

The Ledermans' dilemma is one that adult children around the country concerned for the well-being of elderly parents are facing amid calls for social distancing to keep Covid-19 from spreading. The answer for this particular mother and son was an unscheduled road trip, one packed with Canadians, comedy and memories.

Lederman – well-known in Western New York for his comedy, his comedy club and his daily appearances on WGRF 97 Rock – caught a one-way flight to Florida at 6 a.m. March 17 to meet up with his mother.

His mother was waiting in a development that was getting emptier by the day. All but two of the residents on her floor had already cleared out.

“I live in a complex that has 300 condos, and we were told that if any one of those people got the virus, the entire complex would have shut down,” she said.

Gerry Lederman golfs three times a week, enjoys pool Pilates and is often seen on the dance floor at parties sponsored by the complex that doubles as her winter home. She and her late husband of 58 years, Dr. Alfred Lederman, purchased their Sea Haven condo 24 years ago, so she knows the coming-home drill well. But she usually has more time to prepare.

“I don’t know how I got ready," she said. “I didn’t have a chance to take a lot. I did pack my clubs and all my golf outfits."

Gerry Lederman is particular about her hair and attire. She served as director at the Continental School of Beauty for 15 years during the '70s and '80s, after a career in early education in Kenmore, where she put her master’s degree to work.

Her son packed her car and reminded her of their last road trip to Boston, when the younger Lederman learned of his mother's fondness for gum.

“She thought I had an ear ache because I kept on putting all this Kleenex in my ears,” he said. “This time we had one rule: no gum chewing.” 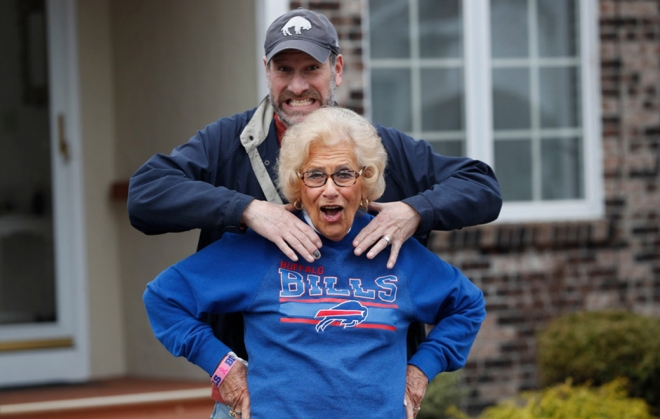 Comedian Rob Lederman and his mother Gerry, 88, joke around about their 30-hour car ride back from Florida. (Sharon Cantillon/Buffalo News)

Gerry Lederman kept herself busy on the two-day journey, finishing 10 word-finder puzzles along the way. “I’m getting so bright we won’t need lights,” she told her son.

All the while, she tried to demonstrate the power of positive thinking. At one point during the ride home, Lederman recalled, it was raining so hard he could hardly see.

“My stress level was getting up, and my mother said: 'Now, this could be snow, Rob.’ When we stopped for gas, she’d say: ‘Look how cheap gas is here. Isn’t that great?’ ” he said.

Said his mother: "No matter how bad a situation is, there’s always something good that came out of it."

"She started telling jokes using accents. There was one about this little Italian man, another one about three rabbis, a train conductor,” Lederman said. "She told me stories about my dad, about growing up on a chicken farm in Churchville."

“I got caught up," she explained. "I wanted Rob to remember things, but I never had an opportunity for him to listen to me. I had a captive audience.”

Lederman recalled a similar “crazy” pattern during traffic jams from Georgia to Pittsburgh, with Canadians trying to beat the emergency closing of the international borders set for midnight March 18.

The spur-of-the-moment road trip ended at 10 p.m. March 18. And while Gerry Lederman settled into her patio home and eventually gave herself a haircut, her son continued to second-guess his decision.

“I took her out of Pompano, where at the time there were no cases, and brought her to New York that has become an epicenter,” Lederman said. “I still question if I did the right thing, but to be able to have that time with my mom was precious.”