During this outbreak of Covid-19, amid growing fear it might burn out of control, one of the revelations made clear in all the worry is a wave of gratitude for people doing jobs that demand elemental human interaction.

Certainly, that goes for nurses, doctors and paramedics, as well as all those in public safety uniforms – at a time when a Buffalo police officer is in critical condition from the virus, and four other officers have tested positive.

Certainly, you feel appreciation for the kid checking out your groceries at the store, or the clerk who hands you a cup of coffee through the window, or the public works employees who dispose of trash left at the curb, a duty that now comes with a much higher set of stakes.

In that spirit, allow me introduce you to Maria Olmeda Dandridge, whose work – ignored or disregarded for too long – goes beyond simply being worthy of respect.

Her job, in the most immediate way, will save some lives.

Dandridge is a cleaning woman for Delaware North at the Clarence service area on the state Thruway. Her official title is more formal, but that is her core work. I met her there not long ago as she moved with disciplined fury from counters to tables to doors, wearing a mask and plastic gloves as she sprayed and scrubbed, a task of sweeping consequence in a new world of hidden risk.

Think of this. Clarence is the last rest stop before Buffalo for drivers from the East. In a state where confirmed cases of Covid-19 are climbing toward 50,000, it is almost certain that people unknowingly carrying the virus have pulled over to grab coffee or use the restrooms at many Thruway stops.

Dr. Sam Cloud, associate medical director at Erie County Medical Center, spoke Friday of how Covid-19 can live on plastic or stainless steel for several days after contact with a carrier. The first line of defense, then, becomes Dandridge and her fellow cleaning people at hospitals, clinics, stores or any spot where people still gather.

At ECMC, Cloud said, men and women who clean for a living make it possible for nurses and physicians to do their jobs. As for those in the larger community like Dandridge?

She is doing health care, Cloud said, in the most direct of ways.

"I value what I do for a living," Dandridge said, a statement that reaffirms what I learned firsthand as a kid. 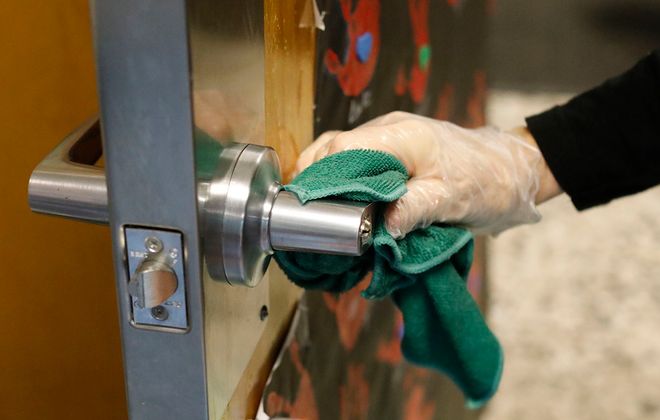 I told Dandridge my mother was also a cleaning woman, a family story I suspect is shared by many of you in this working community – including Cloud, the ECMC physician, whose grandmother did that same hard job.

In Buffalo, as a child of immigrants, my mother earned what she could in the years before World War II by cleaning the houses of the wealthy. She later had similar duties as an aide at the old state hospital.

Even with the last job she ever held, not so long before her death, my mother was making beds, cleaning floors and scrubbing restrooms at a residential school in Dunkirk.

Always, she approached it with fierce dignity and grace. For that reason, as soon as I read about the threat of Covid-19, I thought of all the women and men who clean for a living, the custodians and maintenance people who routinely go home with sore backs and aching knees, earning low or modest pay, all too often ignored by those in business clothes passing through the same workplaces.

Dandridge and I, both 60, started talking. She was hustling to clean a Thruway dining area that would soon be closed to travelers, though the restrooms and a Tim Hortons Cafe and Bake Shop remain open. Intrigued, I mentioned a couple of lessons my mother passed down about the work.

The first was that you can always do a better job of cleaning on hands and knees, and the second was that a central ethic and priority in scrubbing any room was a willingness to aggressively attack whatever mess you might least want to clean.

She told me she was born in Puerto Rico, later moving to Western New York as an 8-year-old. As a girl, she was a fast worker who was ready to help when her mother, Aurelia Olmeda Cruz, went to the fields and orchards to pick cherries or strawberries for whatever it paid.

At home, Dandridge said, it was her grandmother, Eduarda Olmeda Cruz, who had a life-changing impact on the way the child envisioned cleaning.

Eduarda kept her home spotless, based on one discipline.

“Everything was about her hands,” Dandridge said.

Her grandmother used to say a mop separates you by four feet from the floor you need to clean, and the only way to do it right is to get down and scrub by hand.

“I was trained to do it the old way,” said Dandridge, keenly aware of what is now at risk. The Thruway Authority has asked Delaware North to meet federal Centers for Disease Control and Prevention cleaning recommendations, and Dandridge, of Buffalo, sees the way worried travelers use their elbows to push through doors, fearful of contact with any surface.

She spends her shifts relentlessly cleaning doors, glass, the exterior of vending machines and every possible inch of restroom surface that someone might touch.

"Our customers deserve a chance to relax," said Dandridge, who described herself as well-protected and said she does not feel vulnerable to the virus.

As a young woman, she said, she did some housekeeping work, though she later sought jobs with better pay and benefits. For years, she recalled, she made a good wage as a machine operator. Yet she was eventually laid off, and her new concern – as she neared her 60s – was job security.

Dandridge took the position at Clarence not quite two years ago, when it occurred to her that cleaning was not only a task of eternal importance, but involved duties from which a lot of people shy away.

98-year-old, grandson lean on – and learn from – each other during trying times

That instinct was prescient. Delaware North is “furloughing” most of its 57,000 employees nationally, including many in the service areas, after the Thruway decided it would keep just one food vendor open in most locations.

While a company spokeswoman said specific numbers for each service area were unavailable, Dandridge said she was asked to stay on, a request she believes is based on one main reason: During a pandemic, at a place that serves so many travelers from so many points, what job is more important than cleaning?

Maybe her work represents one small and lasting gift of this crisis. At dawn each morning, if you drive the streets of Buffalo, you see women and men standing in the cold at bus stops, ready to begin a long day at the kind of jobs whose significance for too long was too easily overlooked.

Cleaning people, certainly, were in that bracket. Still, if you contemplate the alarm rippling through this nation, and you think of the palpable reassurance in public restrooms that by sight and scent seem freshly cleaned, you hope people might look again at such workers as Dandridge.

As Cloud says at ECMC, they are on the front line of saving lives.

Dandridge is grateful, but she needs no surge in affirmation. She has always understood the magnitude of her work, and she said her sense of worth about what she does today is no different than what her grandmother taught her, long ago.

“What I do for the coronavirus,” she said, “I’ve been doing my whole life.”