The shutdown of spring training didn't just put a sudden stop on things for players. Especially when it comes to the minor leagues, coaches and managers are all trying to push forward to make the majors someday, too.

At 44, Canisius High graduate Fran Riordan is getting close. He was preparing for his third year as a Triple-A manager in the Oakland Athletics chain and his second with the Las Vegas Aviators of the Pacific Coast League when word got to the A's camp in Mesa, Ariz.

Riordan hopped a flight and headed home to Buffalo. Now he's doing what we all are: Sitting, waiting and trying to stay safe.

"It was strange for sure, something you had never dealt with before," Riordan said. "It was a very surreal feeling where (General Manager) David Forst and (executive vice president) Billy Beane came to talk to everybody and just let everyone know there wasn't a lot that was known at the time other than they were going to have to send everybody home. A lot of uncertainty with the players and coaches and it became pretty clear pretty quickly it was a much bigger thing than baseball."

It's been a long, strange journey in the game for Riordan and this is going to be the longest of times with no baseball for him in the spring. A self-described "Navy brat kid" who was born in Virginia Beach, Riordan's family moved to Western New York when he was 9. He attended Clarence High School for a year before heading to Canisius and graduating in 1993.

A standout first baseman/outfielder, he played in local amateur leagues during the summer while a player at Allegheny (Pa.) College. As a 21-year-old in 1997, he started a seven-year career in independent baseball with the Richmond (Ind.) Roosters.

In 2001 and 2002, while still in his 20s, Riordan led Richmond to league titles while serving as a player/manager. Save for one season in the Northern League, he managed in the Frontier League from 2000-2014, winning three championships, posting seven playoff berths and finishing as the league's all-time leader with 625 victories.

A Frontier League Hall of Famer who has an annual league citizenship award named in his honor, Riordan would return home to Buffalo after each season. He's the co-owner of The Copy Store on Court and Franklin with his brother, Chris. The business, and not baseball, was going to be his livelihood.

That all changed in 2014. Current Las Vegas hitting coach Darren Bush was a long-time opponent of Riordan who kept in touch with him to recommend players for Indy ball. One day, Bush told Riordan that Oakland was looking for a manager for Class A Beloit (Wisc.). Riordan interviewed and accepted the job.

Riordan spent two years at Beloit, got the call to Double-A Midland in 2017 and won the Texas League title even after a 67-71 regular season. In 2018, he was named Triple-A boss in Nashville.

"The Oakland Athletics gave me my opportunity after managing independent ball all those years and it was a legitimate opportunity that I'm very grateful for," Riordan said. "I was able to advance, and everything they've told me from the second they've hired me has not only been the truth, but is a great situation."

Riordan went 72-68 in Nashville and things really took off last year, when the A's moved their Triple-A team to Las Vegas. Newly named the Aviators, the team played in the new Las Vegas Ballpark. It's located in the scenic Summerlin section of the city next to Red Rock Casino and City National Arena, the practice facility of the NHL's Vegas Golden Knights.

Riordan's team went 83-57 and won its division title before falling to Sacramento in a five-game semifinal playoff series. The Aviators shattered the franchise record with 250 home runs – including a league-record 11 in one game – and averaged 6.85 runs per game. 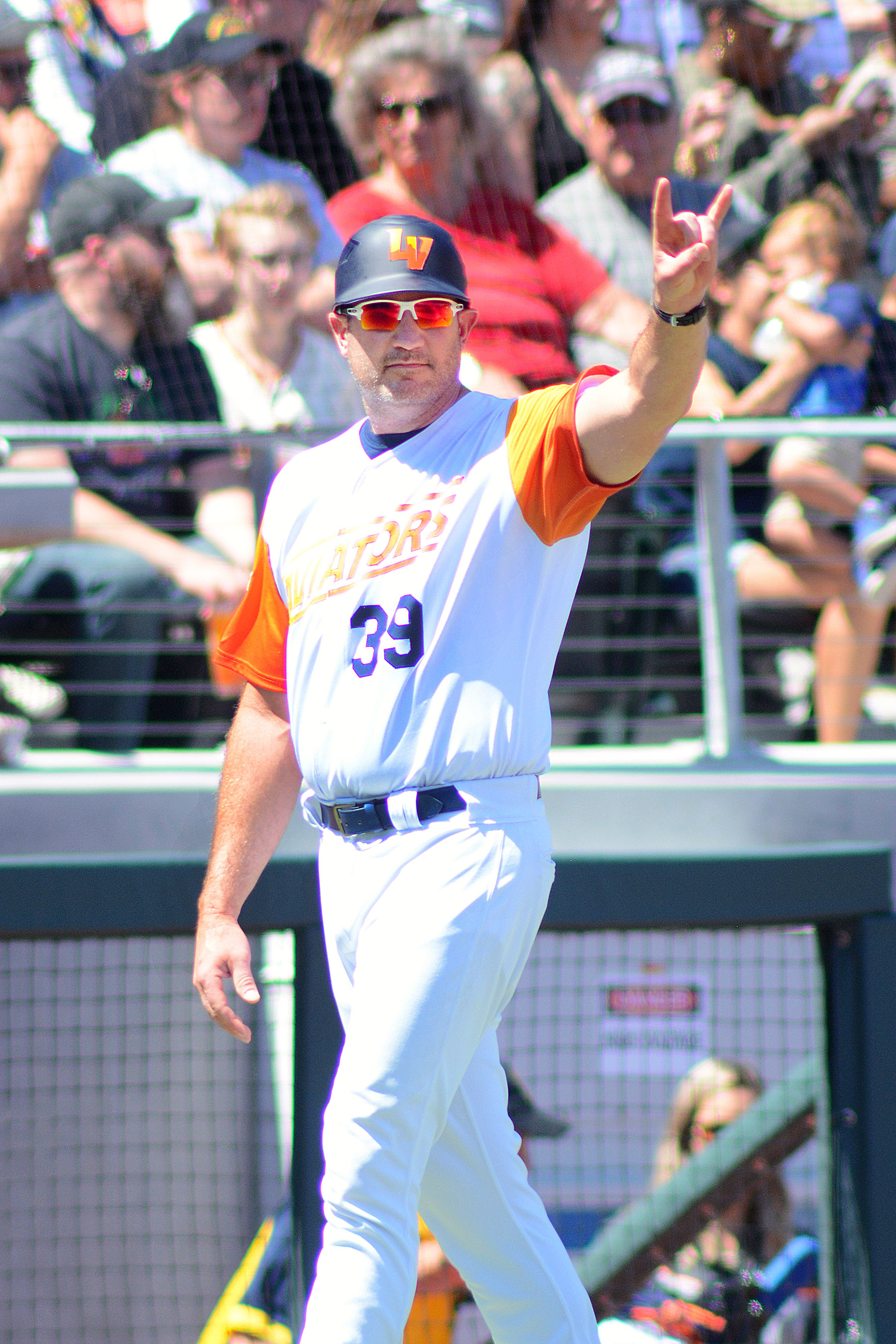 It made for some fun-filled baseball in a year when Las Vegas led the minor leagues in attendance by selling 650,934 tickets and piling up 47 sellouts in 70 dates. The per-game average was 9,299 in the 10,000-seat facility.

"It was an unbelievable experience being able to open a new stadium, bring baseball to Summerlin, to see the fans support it and the reaction to what is now to me the most beautiful ballpark in minor-league baseball," Riordan said. "The excitement that the fans brought was great and we had a very entertaining team. There were so many special things. It was really a magical season for the community, the fans, the team."

Riordan said the buzz around Las Vegas Ballpark was reminiscent of what he saw as a high school student during the early years of then-Pilot Field.

"I grew up going to games there when it was the crown jewel of the minor leagues," he said. "It was very similar, similar stories out in Vegas. We had the same sellout factor, same community excitement factor where everyone was really into it."

Amherst High graduate Jonah Heim played 35 games at catcher in Vegas last season for Riordan, batting .358 in his Triple-A debut, and was in the lineup during the playoff series as well.  The pair stayed tight at spring training this year as Heim had been battling for the backup catcher job in Oakland and was batting .320.

"It's crazy how life works and how small at times the baseball community is," Heim said last week when asked what it was like to show up in Triple-A and play for another Buffalo guy. "Fran has been awesome for me, just amazing. He has your back no matter the situation and he's a players' manager for sure. We developed a good relationship and I know he's always going to be in your corner."

Riordan's job has undergone quite the transformation. In independent ball, he was trying to see if he could help players get signed by organizations mostly to Class A contracts. You get to places like Nashville and Las Vegas, and you're dealing with the to and fro of the major leagues.

As a development-heavy organization, Riordan has relationships with virtually every player on the Oakland roster. His dugout prank of Nashville player Ramon Laureano during a 2018 game informing him of his first big-league call-up went viral. The next night, Laureano joined Alfonso Soriano as the only Dominicans to make their first major-league hit a walkoff winner in a victory over Detroit.

"I look at my job as really having one objective and that's to have guys ready to go to the big leagues and produce," Riordan said. "That takes a lot of collaboration with my staff and the major-league staff and front office. Every day my goal is to work with whatever 25 players I have to make sure they're doing everything to be ready as a productive major-leaguer. The stakes are obviously much higher than in independent ball."

Ramón Laureano started for the Sounds on Wednesday. He didn't know his first call-up to the big leagues was in the works. This was in the 6th inning Wednesday night. CC: @espn, @MiLB, @Athletics pic.twitter.com/HYfcXlqJg8

The Athletics have brought Riordan to Oakland for a few games after the minor-league season during recent Septembers. Just like his players, that's his goal, too.

"I want to coach in the big leagues and I don't make that a secret to anybody," he said. "I try to learn as much as I can possibly can to do my job at the most elite level I can. When you get to Triple-A and knocking on the door, you know you're close. Still, I don't look too far in the future. I'm doing everything I can to do the job now. You want to do the job at the highest level possible. Getting the opportunity with Oakland I certainly don't take for granted."

Riordan is particularly thankful for the relationship he's developed with Oakland manager Bob Melvin, who has led the A's to back-to-back 97-win seasons.

"I've been with him four spring trainings and to me, he's the best manager in the game," Riordan said. "To have his experience and ability and communication skills and to be able to be around that, I know I've become a better manager. He's got a strength and consistency about him that players are attracted to do. He knows what to say, what not to say. He knows when guys need a pick up or to hear hard things. You learn so much from him."

Riordan said when he took the Beloit job, he was going to give himself five years to see how his career path was heading. He feels he's right on schedule.

"The copy business is obviously closed right now (due to the coronavirus pandemic) and I'm very fortunate that Chris runs the company, is very talented at what he does, so the business is in great shape by every spring training," he said. "My time commitments are more now, so I'm really only in Buffalo for about 4 1/2-5 months.

"In three years with Oakland, I was already promoted to Triple-A and felt this was a good career path. It was night and day from five years ago. Indy ball was 100 percent love of the game. I loved what I did in independent baseball but you don't think baseball is going to be a future possibility to provide a consistent career path. I just loved the game and stuck with it."

Riordan is now sticking by his players as they await word on their next steps. It seems unlikely minor leaguers will play much before June, maybe not until July. The major leagues have to get up and running first, and likely with expanded rosters to start, before the minors can get going.

"You just do the best you can to keep in touch with guys," Riordan said. "All of us. (Farm director) Ed Sprague, the coordinators. You have different objectives with different players. Keeping them sharp and communicating with them that they're healthy, making sure their families are healthy, that they're doing OK financially. It's a difficult time. It's just important we're communicating with them to let them know we're thinking about them and we're there for them."