Work has been difficult for Machelle Pohlman and Charles Castiglia. Pohlman, who co-owns J.H. Dodman Meats with her husband, Todd, has seen revenue for the family business drop precipitously the last two weeks, forcing a few layoffs. Castiglia, who runs Lakeside Memorial Funeral Homes, has been working with families who feel they can't grieve properly amid this pandemic.

But by forming a "Takeout Brigade" among their friends, Pohlman and Castiglia have been able to show their empathy for other small businesses, as well as safely meet with their social group a few times each week.

The brigade's concept is simple and easily imitated, not unlike a cash mob. Pohlman, Castiglia and his wife, Rachel, gather their friends, choose a locally owned restaurant to support through takeout, place their orders and then all meet in the restaurant's parking lot.

In most cases, they won't even leave their cars, which they try to park in a circle if space allows. The group typically receives curbside service, then eats from inside their cars and socializes while keeping a safe distance from their friends. In some cases, social distancing is relaxed for couples or family members who've already been in close proximity.

From left, the key players in the Takeout Brigade: Machelle Pohlman and Todd Pohlman, then Rachel Castiglia and Charles Castiglia. (Derek Gee/Buffalo News)

For Castiglia, it's the necessity of community that inspires him during the Covid-19 pandemic and, at least briefly, makes life feel normal again.

"We're all in this together, and we all need to support each other right more than ever," he said.

Even though the takeout-and-delivery-only mandate on local restaurants has been in effect only since March 16, the Takeout Brigade has been active. 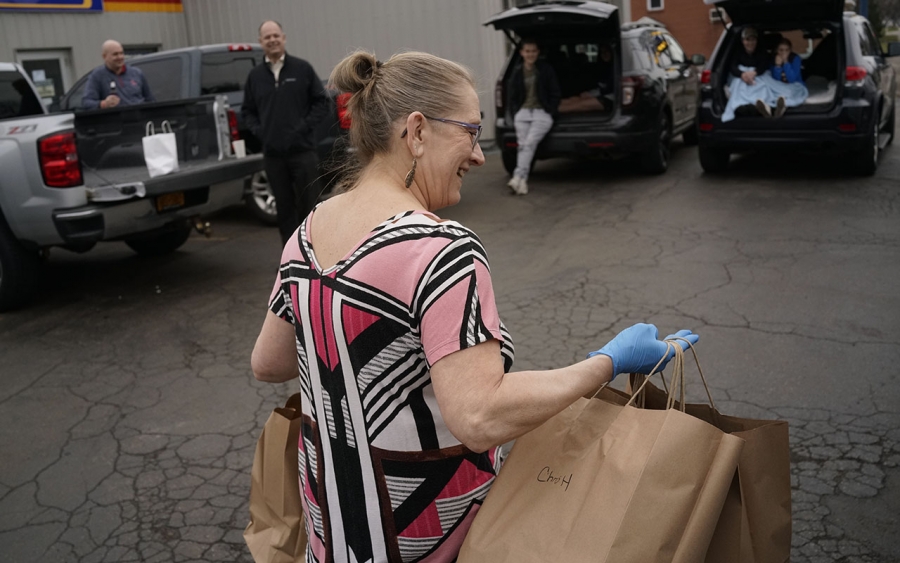 Winfield's Pub owner Cheryl Daulton delivers meals to a group of customers parked in the lot next door to the Lackawanna establishment. (Derek Gee/Buffalo News)

Thursday, the destination was Winfield's Pub, at 1213 Ridge Road, a small restaurant in Lackawanna run by Tab and Cheryl Daulton.

The Takeout Brigade's orders included lamb burgers, cheeseburgers, fish tacos, tomato soup with housemade jalapeno croutons and pork belly burnt ends. The meals were enjoyed on a spring evening warm enough for the Pohlmans to stand up through their car's sunroof.

Previous Takeout Brigade stops were Lucia's on the Lake, a fine-dining restaurant on the shores of Lake Erie, which set the venture in motion. Pasquale's was another Southtowns staple on the agenda. Then there was Chef's, for lunch, when Pohlman showed up driving J.H. Dodman's meat delivery truck. That gathering, posted on the Parm legend's Instagram page, provided a nice boost of attention.

Some wonderful local WNYers have been getting together and eating dinner from their cars outside restaurants in town. They are staying safe and also supporting local businesses—both of which are pretty awesome during these times. They recently chose Chef's. Now this is social distancing at it's finest! To each of you... thank you SO much for your support! ❤️ #buffalove #buffalony #hashtagstepoutbuffalo #wny #ilovechefs

She credits her efforts through J.H. Dodman and as a freelance photographer for growing a robust social following.

"I had to put myself out there to be a good businesswoman," she said.

Pohlman remembers her reaction to the news March 16 when dining rooms were forced to close; she could relate to their straits in light of the decline her own business faced. As she devised her plan and mobilized her friend group – their prevailing response was, "What? That sounds fun!" – she knew the endeavor could have wide-reaching impact. 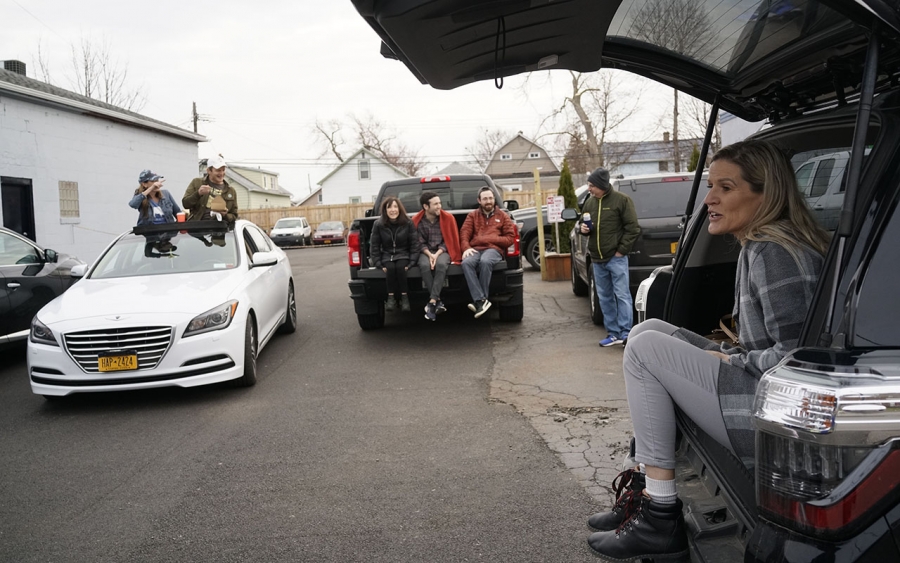 Wende Paas chats with her friends from a distance in the back of her SUV. (Derek Gee/Buffalo News)

"People on Route 5 will see us (eating outside Lucia's)," she remembers thinking. "Maybe we'll start a trend."

Seven cars gathered in Lucia's parking lot, and the idea was in motion.

The average gathering has been around eight-to-10 cars, which certainly delivers a sense of optimism and support for those straining inside lonely kitchens.

The Takeout Brigade experience has been meaningful for both Pohlman and Castiglia on two levels: personally, because they can stay connected to their friends, and in respect to the community, because they can feel the joy of giving a nice bump to other businesses.

"We're doing it because these restaurants aren't going to survive without (people ordering) takeout," Castiglia said. 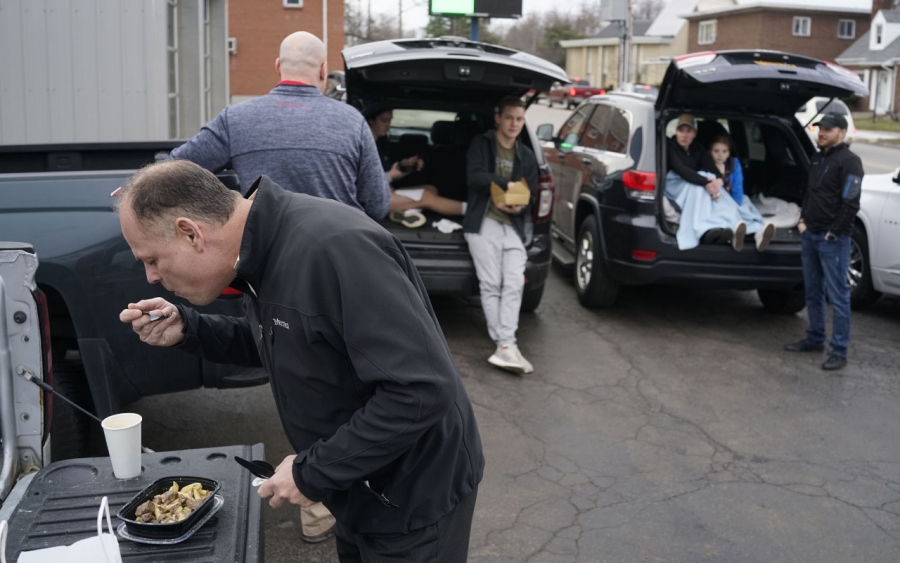 John Park enjoys his dinner from the tailgate of his truck stationed outside Winfield's Pub. (Derek Gee/Buffalo News)