In a region that has never been shy about its love for a celebratory beer or three, plenty of people are finding a way to carry on traditions of good cheer while maintaining social responsibility, in what we all must finally acknowledge is “the new normal.”

Chuck Wolter of Buffalo is, like so many of us, currently working from home and avoiding large gatherings and crowds. But he had no intention of allowing the pandemic to separate him from his closest, longtime friends. So he and his girlfriend decided to raise a pint and toast their shared health, via the internet.

“I’m feeling a little cooped up, but I’ve been trying to go for some long walks outside, because it’s a really bizarre feeling to be the sort of person who is used to keeping busy all the time, and to suddenly find yourself not doing anything, while everything is canceled – it’s really weird,” Wolter said.

Using Zoom, the video platform commonly employed in the corporate world as a means of holding conference calls and virtual meetings, he reached out to friends and planned a virtual gathering/cocktail party.

“I did a preliminary one as a sort of happy hour with friends from work, and it went really well,” Wolter said. “So over the weekend, we decided to do another one, with a bunch of our oldest and best friends, and it really was great. We had 13 people participating.”

Thirteen people hanging out, drinking and chatting might sound like a recipe for a verbal trainwreck, but according to Wolter, the opposite proved to be true. Friends left room for their friends to respond, topics were introduced in an open-ended fashion, and no one engaged in verbal sparring for its own sake.

“We ended up talking for almost three hours,” Wolter recalled. “You have to get into a kind of rhythm, because only one person can really talk at a time. ... My girlfriend remarked that this was different, because, when we normally get together, it can be, like, the guys are in one room talking about baseball, while the girls are in another room talking about 'Real Housewives' or whatever (laughs).

“So in this situation, we all had to come together, and all share in the same conversation, out of necessity. Everyone was much more mindful about giving each other space to talk.”

Rich Metz of Buffalo said virtual gatherings at a time like this can provide a bit of normalcy.

“Unlike texting or social media, even though we are using our devices, we can see each other and interact kind of like regular times,” Metz said. “Many people are looking for ways to feel normal and to see their friends and family, and this is a great way to accomplish that. It might not be for everyone, but it seems to really be picking up in popularity in my social circles.”

Hanging in the virtual pub might not be a substitute for the real thing, but bearing in mind our present moment in history, this option is, in the experience of many, far better than nothing at all.

“A group of six friends and myself did the virtual hang-with-beers last weekend, through Zoom,” J.R. Friedman of Buffalo said. “I'm not a very tech savvy guy and I normally look down on virtual interactions, when the real thing is available, but the idea of not spending time with my friends on the weekend was unthinkable. ... There was also the added benefit of including out of town friends who normally would be left out of the mix.”

The regional music community has embraced the "virtual gig” concept, and often, individual performers streaming solo shows from their own living rooms and basement studios via Facebook Live can be seen enjoying a cold frosty one and toasting their digital audience between songs. Transitioning to the nonperformance digital happy hour with friends is not necessarily much of a leap for them.

“I’ve done two virtual drink-hangs,” said Sonny Baker, a solo artist and guitarist in Lazlo Hollyfeld. “The first one involved a large group of us – friends living here in the city, friends from the Southtowns and even one friend who lives in Seattle. It was very refreshing to see everyone’s face. To be able to joke and share drinks, it really helped a lot.”

Not all virtual get-togethers need to involve drinking, of course.

For Gary Tredo and his Hertel Avenue-area neighbors, a little bit of ingenuity and a few pieces of chalk combined to create what he called a “Six Feet of Separation” party, for which strategically placed markings on the pavement ensured guests would maintain the recommended distance from each other, while still being able to intermingle. 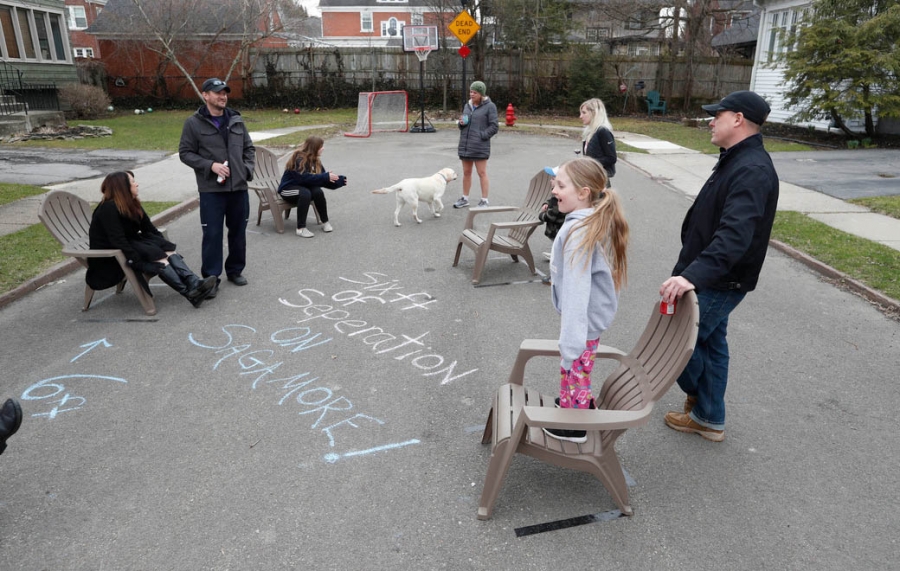 “The first thing you have to know about Sagamore Terrace is that the people that live on the small, hidden street have a special relationship,” Tredo said. “The idea for 'Six Feet of Separation' was not for it to be a joke, but to follow the rules – no more than 10 people, all 6 feet apart, outside in the fresh air enjoying each other's company.

“It also happened to be one of our neighbor's birthdays. I was tired of people celebrating their birthdays alone, or via some kind of social media. To be able to sing 'Happy Birthday' to a friend in person during this time was special.”

Tredo, who has a 2-year-old and 7-month-old daughter, found his neighbors to be wholly amenable to the “Six Feet of Separation” idea.

“(Kids) don't understand why they can't hug and kiss everyone. It's hard on the neighbors, too, because the kids are so cute and people love to be around them. But in the end, everyone followed the rules and kept their distance and seemed excited to do something.”

For Wolter, there are positives involved in these virtual hangouts that could transcend the crisis that birthed them.

“Within my group of friends, a lot of them are couples, and they have kids now, and going out on Friday night is not as routine a thing as it once was,” he laughs. “But with this kind of hang, no one has to worry about getting a babysitter, and people who live out of town now can still join in. No one has to drive anywhere. There were so many pluses.

“I can definitely see it becoming a tradition that endures.”