His mother, Mairri McConnell, works multiple jobs, including sales at a garage door manufacturer. His father, Anies Wisdom, drove trucks. Any discretionary income went toward their son's blossoming hockey career, and it often wasn't enough to foot the bills for an increasingly expensive sport.

Wisdom relied on used equipment and received help from the hockey community around Toronto, perhaps no assistance more important than he received one summer afternoon almost a decade ago in a crowded gymnasium in Scarborough, Ont.

One of 150-plus children gathered  in a community center for a charitable ball hockey tournament, Wisdom received an award and, more impactful, a motivational message from the event's host: Buffalo Sabres winger Wayne Simmonds, an inspirational figure in the culturally diverse community.

"‘You’re going to be something one day, kid; keep going,'" recalled Wisdom, now a 17-year-old forward for the Ontario Hockey League's Kingston Frontenacs.

From the ages 7 to 10, Wisdom attended three of Simmonds' six tournaments, where kids were greeted and coached by NHL players. Lightly-used and new equipment was distributed to families in need.

Simmonds, now 31, has used his platform as a well-respected NHL player to try to make hockey accessible to everyone, no matter their socioeconomic background. Over his 12 NHL seasons, Simmonds has scored 251 regular-season goals while demonstrating passionate leadership and an impenetrable loyalty toward teammates.

His leadership and experience playing in important games are reasons why the Sabres acquired him from the New Jersey Devils at the trade deadline Feb. 24 for a conditional draft pick.

Yet, for all he has accomplished on some of hockey's biggest stages, Simmonds' greatest impact might be on the lives he has touched along the way.

"It was a very good experience because he was known, especially as a black kid growing up wanting to make the NHL," said Wisdom, projected to be selected in the next NHL draft after scoring 29 goals this season. "I never really had a lot of role models to look up to. ... That little push and that extra – 'You’re going to be there one day' – it was an unreal feeling.

"He helped me push myself more. There are times I still think about it. It’s one thing hearing it from your parents, but a guy who is already there and made it, coming from him it’s a whole different story."

Scott Tharp wasn't expecting his invitation to be accepted when he texted Simmonds last October, ahead of the forward's first game back in Philadelphia after playing eight seasons with the Flyers.

Tharp, CEO of the Ed Snider Youth Hockey Foundation, asked Simmonds if he wanted to attend the dedication of a mural honoring Snider, late founder of the Flyers and chairman of Comcast Spectacor who died in April 2016.

"He said, 'What time? I’ll be there,'" Tharp recalled. "That shows you have immersed he was in everything going on in this city."

The mural covers the side of a building at 10th Street and Snyder Avenue in South Philadelphia. The most prominent image is of Snider speaking to six children at an event. In 2005, Snider formed the foundation to provide underprivileged children in Philadelphia and Camden N.J., with an opportunity to learn to play ice hockey. The organization refurbished four rinks around Philadelphia. It also funds and administers programming for more than 3,000 boys and girls at nine locations.

The only player depicted in the mural is Simmonds, who is shown skating with a group of children at a local rink. He immersed himself in the foundation's work shortly after arriving in Philadelphia via a trade from Los Angeles in June 2011. Simmonds accepted an invitation to join the foundation's board of directors and helped facilitate player participation at its annual celebrity golf outing. 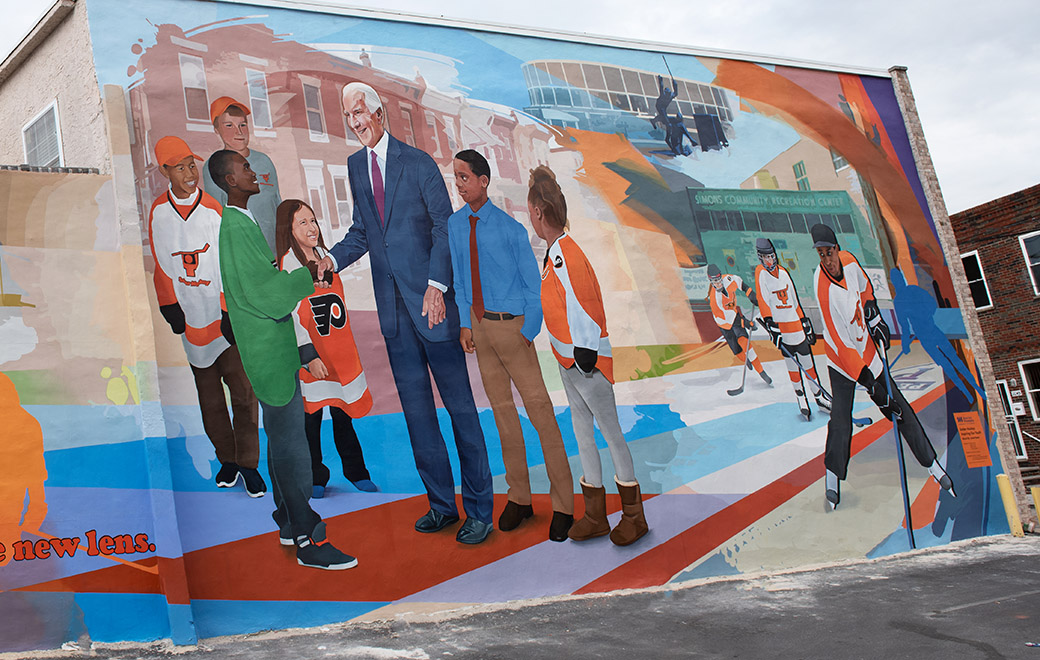 There were also many hours teaching children on the ice at local rinks. Youth hockey players in the area would argue over who wore Simmonds' No. 17, Tharp said.

Simmonds was still new to the city when he was invited to attend the dedication of a rink in a predominately African-American community in North Philadelphia. Tharp recalled Simmonds driving himself to the rink and spending "hours" at the facility interacting with the children.

"I don’t think he was here for more than a month, barely settled in, and he would regularly visit the rinks and the facilities, the sites we operate on a daily basis," said Tharp. "Go on the ice with the kids or actually even sometimes help them with homework. I can’t speak highly enough. ... Absolutely, he went above and beyond."

Simmonds' ball hockey tournament, Wayne's Road Warriors, served a similar purpose, helping children whose families did not have the financial means to pay for team registration and equipment. Participants at the three-day event took home new equipment, including a helmet, hockey gloves and stick from the NHL Players' Association, as well as an overnight bag and water bottle from Bauer.

Simmonds invited various NHL players to attend the event, including his close friend, Chris Stewart, a Scarborough native who played for the Sabres from 2013-15. The tournament was not held the past two summers, as Simmonds and his wife, Crystal, got married and had their first child.

"When you grow up, you dream of making the NHL," Simmonds said. "But I don’t think you really know the impact you can have outside the game on people that are looking up to you. I think I realize now the impact I had when I was doing (the tournament). It was obviously something I wanted to do, but I think when you sit back and actually pay attention --- I had kids who are now playing in the OHL that are going to be getting drafted this coming year. Kids that the parents, we take them to get equipment and the parents would be crying. Telling me, 'Thank you, thank you, thank you.' To me, it wasn’t a big deal. I was just doing what I thought I should do. The impact was great and it definitely makes you feel good on the inside."

The charitable mission began long before Simmonds was drafted in the second round, 61st overall, by the Los Angeles Kings in 2007. His mother, Wanda, told him at a young age that he must give back to his community if he ever made it to the NHL.

Simmonds was one of six children in the family's household, and money was tight with all of them competing in sports. Wanda worked for the city of Toronto and Simmonds' father, Cyril, was in construction.

Like many children in Scarborough, Simmonds' parents purchased used equipment, and he was talented enough that teams would often take care of the registration fee. At 14 years old, he befriended Stewart, who was forced to not play competitively for two years because the registration and equipment costs for he and his brother were too expensive for his family.

"To say we came from humble beginnings would definitely be an understatement,"  said Stewart, now 32 and playing for the Flyers' American Hockey League affiliate. "As much as he’s done for the game and in the game, personally, for me, it’s watching the man he’s become away from the rink. Everything he’s done for our community back home has really solidified him in that neighborhood. That’s been the biggest pleasure for me, watching him transform in to the man he’s become today."

The genesis of Simmonds' toughness on the ice can be traced to pee-wee hockey when, as a 7-year-old, he developed a "pack-like mentality" with a group of teammates he would skate alongside until his talent earned him an opportunity in major junior hockey.

No one was going to mess with his teammates when Simmonds was on the ice, which remained the case through his time in the OHL and after he debuted with the Kings in 2008. He didn't back down inside his own dressing room, either.

Simmonds didn't adhere to old-school, unwritten rules about young players remaining quiet. His passionate expressions carried weight in a room filled with veteran players once he joined Philadelphia, and he quickly became a beloved sports figure in the city.

"He’s the ultimate warrior, I’ve always said it," said Flyers captain Claude Giroux ahead of a game against Simmonds and the Sabres. "He’s played through a lot and he’s not a heavy guy, but he can go against everybody. His attitude is contagious."

"We had a hell of a time, that’s for sure," added winger Jakub Voracek, a former teammate and close friend of Simmonds. "He had an amazing career here for the Flyers. Power forward who scores goals, fights, hits and he’s a good leader in the locker room. Obviously when he plays the game he plays as hard as he can. Off the ice, he’s an easy going guy. One of the nicest guys I know. That’s what makes him special."

Simmonds scored 203 regular-season goals over his eight years in Philadelphia, six of which included 20 or more goals. In 2017-18, Simmonds missed only seven games and scored 24 goals despite suffering a tear in his pelvic area, a fractured ankle, a pulled groin and a torn thumb ligament.

He served as an alternate captain. His work off the ice, including within the Philadelphia community, earned him the NHL's Mark Messier Leadership Award in 2019.

"It’s his character," Flyers forward Sean Couturier said. "I think it’s the way he grew up. He’s been through a lot these past few years, injury-wise and stuff. He’s always battled through it. Always made sure he was out there giving it 100 percent no matter what. When you see that as a teammate, it makes everyone want to jump in and be like him."

Simmonds' emotional farewell from Philadelphia occurred in February 2019, when he delivered an impassioned dressing room speech following a 4-3 overtime win over the Pittsburgh Penguins at Lincoln Financial Field. Two days later, Simmonds was traded to the Nashville Predators and signed with the Devils last offseason.

Suddenly, Simmonds is on a mission to prove he is still an effective NHL player, and his performance in seven games with the Sabres made a strong impression on coach Ralph Krueger. Though Simmonds had only one assist, he created chaos around the opponent's net and provided Buffalo with the physical presence the team has lacked in recent seasons.

Simmonds, like the rest of his Sabres teammates, is awaiting word on whether he has played his final game of the season. He is scheduled to become an unrestricted free agent in July and isn't sure where he will call home next season. His preference is to make a difference in Buffalo.

"Definitely," said Simmonds of his interest in returning next season. "Nothing is ever out of the question. It’s whether they want me or not, I guess. I think we have a great group of guys. ... They’re very welcoming, and I think we were three or four days in and I felt like I was comfortable. I was at home."