Thousands of parents across Western New York are struggling every day to get their kids to sit still and focus so that they can complete the month’s worth of school assignments they’ve been given.

But will those essays, quizzes and Common Core math problems be graded?

It all depends on where you live.

“We’re not grading it,” Lewiston-Porter Superintendent Paul Casseri said of the work assigned while classes are suspended.

But Buffalo Public Schools teachers will be grading student work during the Covid-19 school closures, the district says.

Half a dozen suburban districts contacted by The Buffalo News said they either are not grading student work or haven't decided yet. One said it is leaving the decision up to individual teachers.

Many local school officials say they have had little guidance from the state Education Department, which has recently said it is leaving it up to the school districts to decide how to handle grading while students are home.

Buffalo faces all the challenges that other districts do in moving instruction online – and more. The city grapples with one of the highest poverty rates in the state, with more than three out of four students economically disadvantaged and likely having less access to technology, plus large numbers of special education students and those whose native language is not English.

Nonetheless, Buffalo decided to grade student work “to be able to provide clear, concise, encouraging and honest feedback to students and parents about their child’s work and work effort during this extended school closure time,” Superintendent Kriner Cash said. “That is part of our job as educators.”

Buffalo school officials are still working on an equitable way to grade student work, according to a spokeswoman. 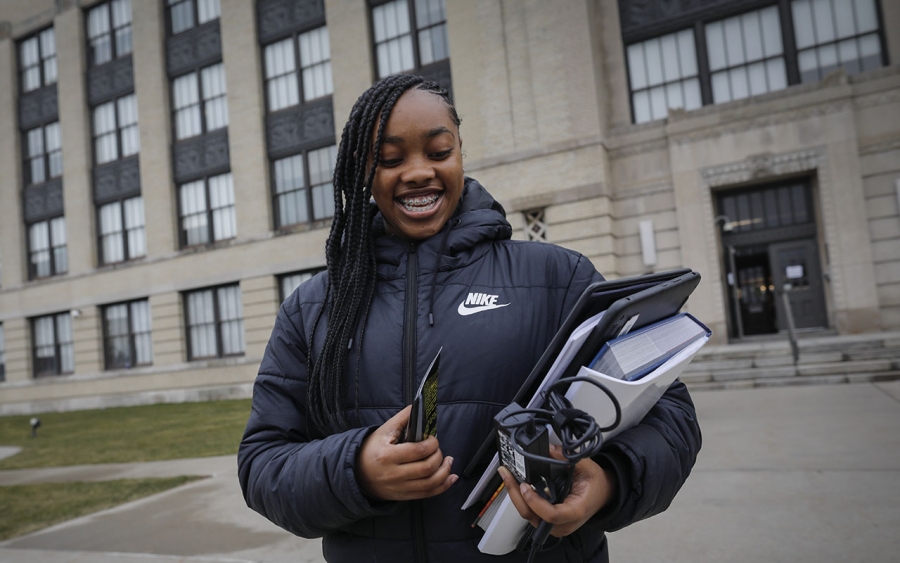 Tenth grade student Kaleah Phillips, 15, carries her school supplies after picking up her work for the next few weeks at the Kensington Frederick Law Olmsted School 156. (Derek Gee/Buffalo News)

In the partially rural Lewiston-Porter district, as in many others, internet accessibility is spotty in certain areas, which officials say makes it unfair to expect students to complete work that’s posted online.

And then there’s another very real challenge when it comes to shifting instruction online.

Prior to the coronavirus outbreak, in many places, teachers have had some training to use things like Zoom for video conferencing, Google Classroom to post assignments, and Castle Learning to give tests. But using that technology was generally something that some teachers dabbled in – not something that they had to learn, or expected to ever have to rely on exclusively to teach students.

“I do have a lot of teachers who haven’t been trained in online learning,” Casseri said. “Some are more technologically savvy than others.”

And many school officials say their focus has been on meeting more basic needs of students and families: delivering meals, providing emotional support, connecting them with child care.

Local officials point out a number of equity issues that give them pause. Not all students have access to computers or the internet. Many students with disabilities will have less access to the supports they need, so they will have a harder time completing the work. Some parents will not be able to help kids with the assignments.

In Kenmore-Town of Tonawanda schools, it's up to the teachers how they want to handle grades during the closure, according to a district spokesman. Some classes, such as those that are part of the International Baccalaureate program at the two high schools, have different requirements, he noted. Generally, elementary students are not being graded. Many secondary students can improve their grades on work that was due up through March 13, when schools closed, but are not receiving grades on new assignments.

"Something to keep in mind, though: We've only been at this a little more than a week," said spokesman Patrick Fanelli. "The guidance provided to teachers and families was as of late Friday. It may be revised moving forward."

Not sure about grading

Some districts, including Williamsville and Lancaster, two of the largest in the region, say they have not yet decided whether to grade work during the school closures.

In a matter of days, schools had to figure out how to provide breakfast and lunch across many miles to hundreds or even thousands of kids. Officials tackled the logistics of distributing chromebooks to students who had no computer available. And teachers pulled together weeks of assignments in a few days.

Some superintendents say they haven’t had a chance to think about whether teachers will be grading student work that’s assigned while schools are closed.

Lancaster, like every district, has been busy tackling logistics, including delivering chromebooks to more than 1,100 students last Friday.

“We were asked to go from brick to click in 48 hours,” said Lancaster Superintendent Michael Vallely. “Grading – we will figure that out. But making a decision at this point would be premature.”

John Abraham, a social studies teacher at Lancaster high schools, is posting student assignments on Google Classroom and reaching out to his students through email and Zoom. He has told them they can submit make-up work from prior to the schools closing to boost their grade for the third quarter. But as for new grades moving forward, it’s not entirely clear what will happen, he said.

“We put the work out. We want the students to do the work,” Abraham said. “If we have students who aren’t doing the work, the district wants us to reach out and try to get them to do the work.”

“We’ve got decisions to make,” said Casseri, the Lew-Port superintendent. “The marking period ends on April 3. So we have grades due. It’s still up in the air.”

Email us at schools@buffnews.com to tell us how the school closure is affecting you and your children.