Until about two weeks ago, this is how Dante Lasting defined a pressing issue in his life.

He is sports editor at The Leader, the student newspaper at SUNY Fredonia. Earlier this month, the graphics editor for that paper decided to step away. The rest of the staff huddled to figure out how to fill the hole. Lasting tried to balance that kind of deadline challenge with his schoolwork, even as he faced a choice most 20-year-olds have no need to contemplate:

His mother, Claudia Catalano, moved last August into the Northgate Health Care Facility in North Tonawanda. She learned seven years ago she had early onset Alzheimer’s disease, and her Buffalo family supported her at home for as long as possible.

For Lasting, the shift to Northgate demanded reexamining his life. He wanted to be close enough to see his mother on any day of the week. Even the 50-minute drive from Fredonia seemed too far away.

He has loved his time at college. His roommate, Shane Keyes, is a good friend from Amherst Central High School. Lasting's role at The Leader meshes with his dream of working in communications for a National Football League team.

Yet even before the nation essentially shut down this month, Lasting was so worried about his mother's situation that he had applied for admission to the University at Buffalo. He knew, before long, he would need to make a choice.

He just did not expect any of these changes to happen in such a fast and overwhelming way.

“I had been going back and forth,” he said about whether to leave Fredonia, until Covid-19 essentially made up his mind for him.

Lasting, whose parents are divorced, is now living in an apartment in the same Buffalo house as his 98-year-old maternal grandfather, Paul Catalano. With Fredonia's classrooms and lecture halls shut down, The Leader's staff made the decision to go entirely digital for the foreseeable future, meaning the questions surrounding an artist for print editions became moot.

In Buffalo, Lasting is using a laptop to handle his online classes and editing duties for SUNY Fredonia. As confirmed Covid-19 cases climb by the day, he has good reason to leave home only when necessary.

“I need to be available every day for my grandpa,” Lasting said, “and I stay safe so he stays safe.”

He and his older sister Arianna are waiting for the chance to see their mother, an opportunity they once believed would always be a simple thing. With the virus representing a lethal threat to residents of nursing homes, no one has been allowed to visit Claudia Catalano for the last two weeks.

Mary Jane Scime, Lasting’s aunt, said the situation is especially hard because her sister realizes regular visitors are no longer coming in, while her condition makes it difficult to understand why. 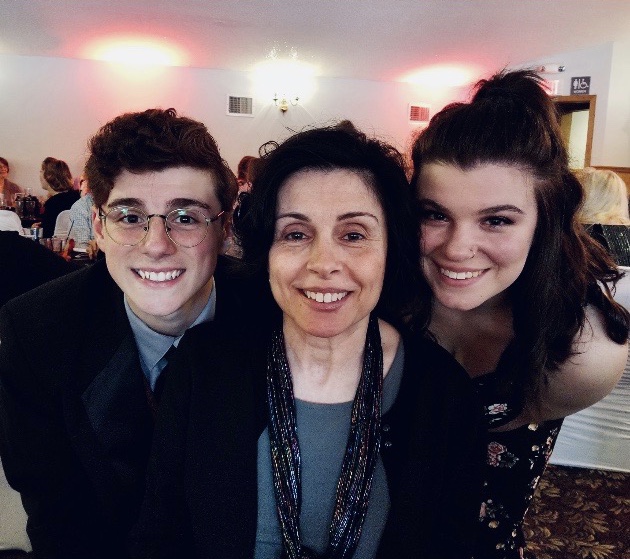 Claudia Catalano struggles with Skype or Facebook messaging. It is possible for Scime and another sister, Paula Thorpe, to reach her by telephone, but she often becomes upset and asks: "When are you coming?"

Back from college, Lasting tries to balance those worries. We read a lot on Twitter about young Americans who seem oblivious to the crisis. Still, it is important to remember that images of crowded parties at spring break hardly speak for the ethos of an entire generation.

Lasting's family is grateful for all he shoulders, at 20.

This week, he used his phone to FaceTime with his mother. "She was able to see me and hear my voice," he said, "but it's not the same as being there, as giving her a hug."

What makes it easier, Lasting said, is the presence of his grandfather. Paul Catalano, so close to 100, is remarkably vital. He served for decades as treasurer of the Federation of Italian-American Societies of Western New York, choosing only last month to finally step down.

While the family is appreciative that Lasting stays so close, the grandson finds the benefits go the other way.

"I've learned so much from him," he said of Paul Catalano, who finds these strange days kick up echoes of other hardships in his life. He vividly remembers the Great Depression on the West Side of Buffalo, when his family had no stove or refrigerator and meals consisted of pork and beans or fried potatoes.

That was life not for a few weeks or months, but for years.

“Everybody was in the same boat,” Catalano said, “so none of us knew that we were poor.”

He was drafted into the Army and ended up in North Africa. His job was helping to maintain some explosives in a port, and one day a mine – dangling from a crane – exploded into shrapnel that tore apart his back. He spent months in military hospitals before receiving an honorable discharge, in 1944.

Back in Buffalo, despite his wounds, he rebuilt his life.

“What I’ve learned,” he said, “is that you’ve got to roll with the punches.”

Catalano rolled. He met Theresa Insalaco, his future wife, at a dance at the old Dellwood Ballroom at Utica and Main. Before it started, he used mascara to make his 22-year-old mustache seem a little darker. 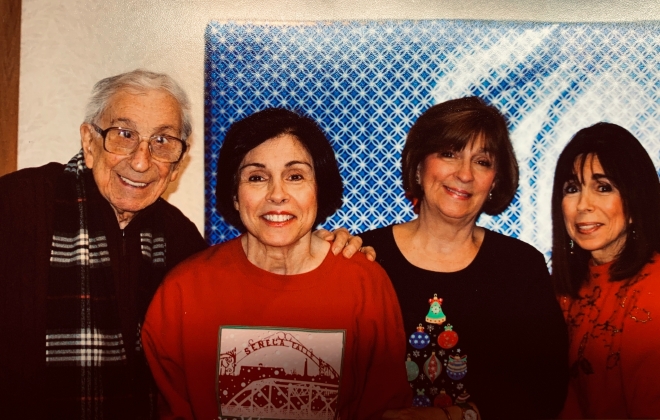 The first time he kissed her, he said, it smeared onto her face.

She stuck around. He used the GI Bill to attend Bryant & Stratton, and he went on to become a credit manager for the Sattler's and Kobacker's department store chains, before he stepped into a vibrant retirement.

Catalano lost Theresa eight years ago. At 98, he has survived hunger, war and a national economic collapse, so while he does not take this global shutdown over Covid-19 lightly – indeed, he is doing his best to protect himself from the virus – he tries to respond with prudence, rather than fear.

“You have to live with it and conquer it, resist it and overcome it,” he said.

Lasting learned not long ago he has been accepted at UB. As far as he is concerned, the trade-off for leaving a memorable experience at Fredonia is sharing a house with his grandfather, an unforgettable teacher.

“What I learned from him,” the grandson said, “is that you always put your family first.”

For now, Lasting looks forward to the day when he can embrace his mother. It is difficult, he said, to explain just how deeply she shaped his perspective. “She always said stick up for yourself, and that you could be the light in someone’s life,” he said.

He was barely 13 when his mother learned she was facing Alzheimer's. For years, she had been a local actress – you might remember her from Tops commercials or from Shakespeare in Delaware Park – and Lasting is still sifting through how he "watched as her life was stripped away in her 50s.”

Even now, in solitude, he has moments of raw grief. 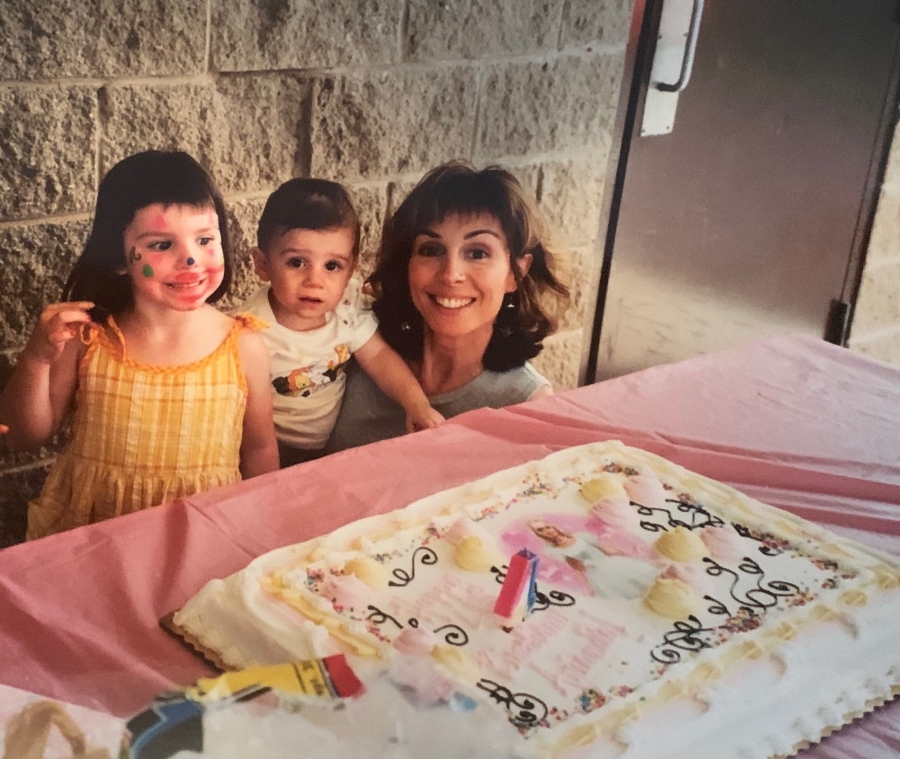 It is good, at those times, to live in the same house as a guy who fully understands. Paul Catalano said his own mother was ill throughout much of his childhood, dying when she was only in her 40s. He learned early that sorrow only reinforces your commitment to a family, an ethic he sought to pass on to Claudia, Scime and Thorpe, his three daughters.

Catalano sees the same quality, now more than ever, in his grandson.

“He reminds me of when I was young,” said Catalano, who has already witnessed times when the world seemed to spin out of control, when chaos wounded even those he cared about the most. As Lasting decides what to do next about college, the old man's presence, every day, provides its own kind of classroom.

The course is love and conscience, and the grandson is an ace.