The deadly new coronavirus proved no match for the love between a 107-year-old mother with mild dementia and her 76-year-old daughter as they blew kisses at one another through the glass door of an Amherst nursing home.

There was laughter and tears, and New York's mandatory ban on visitors entering nursing homes because of Covid-19 faded for a moment.

Deanna Machtel stood on the patio outside Beechwood nursing home on Tuesday and held up a sign for her mother, Celestine “Sally” Szemenciak: “Hi Mom. Love you! Dee Dee. Miss you too! Wish I could bring you a highball!”

Similar scenes have played out across the region since Gov. Andrew Cuomo banned visits at nursing homes March 13 to try to protect frail residents from the highly contagious new coronavirus.

The ban has created anxiety and frustration for relatives and friends of residents. They say they cannot see firsthand if a loved one’s needs are being met. Visiting, they say, allows them to spot gaps in care. Family members say that they also are able to assist in the care. That can take the form of feeding a loved one and taking home dirty laundry to wash.

Or in Szemenciak’s case, Machtel said her mother loved it when she would fix her a “light” highball of Black Velvet and ginger ale, a ritual that has gone on for years.

While the ban has largely cut off firsthand information for families, several issues at nursing homes have come to light:

Despite the ban on visitors, Western New York’s first death Monday from COVID-19 was a resident of a Wyoming County nursing home, where another resident is reportedly also sick. Weinberg Campus in Amherst, which operates an assisted living facility as well as skilled nursing home, told families on Tuesday that one of its assisted living residents had tested positive for Covid-19.

As families of nursing home residents cope with the changes, many have tried to make the best of what has become a stressful situation.

Outside Beechwood, as she held up the sign to a window, Machtel spotted the familiar twinkle in her mother’s blue eyes and knew all was well for the moment.

“Oh, I feel so much better I could cry. I am so happy. She looks so good. She’s smiling and happy,” said Machtel, who broke down as her mother and a couple of nurses sang “Happy Birthday” to her.

Will her mom remember who she is? The downside of NY's nursing home visitor ban

Virginia Holt, a retired nursing home worker of 42 years and former union representative with 1199SEIU, said she has been receiving calls from nursing home employees complaining about a lack of protective equipment.

“Workers are calling me from different nursing homes and hospitals to say they are being told they don’t need a mask if they are not in the nursing department. But these workers still take up meals and put clothes in the rooms of residents,” Holt said. "They are in contact with people on the floors.”

She said she advises the workers to call the U.S. Occupational Safety and Health Administration to file complaints.

“At the very least, they should have masks and gloves,” Holt said.

Concerns over inadequate care and unclean conditions prompted some families to seek assistance from the Center for Elder Law and Justice.

Lindsay Heckler, supervising attorney at the center, declined Tuesday to provide specifics about the complaints against a handful of nursing homes, but she confirmed the center is looking into them.

Bob Sugarman, who contacted the center, said he wants to know what changes have been made to fill the void since he is no longer allowed to assist his 78-year-old wife, Joan, a resident at the Rosa Coplon nursing home at the Weinberg Campus in Amherst.

Sugarman, 80, said his wife suffers from a neurological disease and is unable to move or speak.

“The staff is good but the service I provided in feeding my wife, which takes about an hour, frees up a certified nursing aide to take care of another resident,” Sugarman said. “I would like to know what changes have been made. It creates anxiety when I don’t know what is going on.”

Sugarman said he has been married nearly 56 years and wants to live up to his marriage vows of caring for his wife in sickness and in health.

“I’m not able to able to do that and it is stressful,” he said.

Last week an individual discharged from a hospital was admitted to the rehabilitation unit at Rosa Coplon. But after showing symptoms of Covid-19, the individual was sent back to the hospital and later tested positive for the virus, according to Weinberg officials.

Ken Rogers, chairman of the board of directors at Weinberg, said people on the outside may not fully grasp the intense level of work the coronavirus has foisted on nursing home employees who leave behind their own families to come in and care for others.

“The work that they are doing is heroic. There's the increased pressure that they have in being vigilant in infection control and keeping spirits up by interaction with residents,” Rogers said.

Meanwhile, at the Buffalo Community Healthcare Center, cable television service for residents abruptly stopped a couple of days before the visiting ban, according to Timothy J. Swan, who serves as an advocate for a friend who is a resident at the Buffalo facility.

“Aren’t things bad enough? What are the residents supposed to do? They were not given an option or a letter about this. I am not the only one that is angered by this,” Swan said.

Jay Lawrence, a nursing home spokesman, blamed the interruption in service on the cable provider and said efforts are being made to “remedy this as soon as possible.” 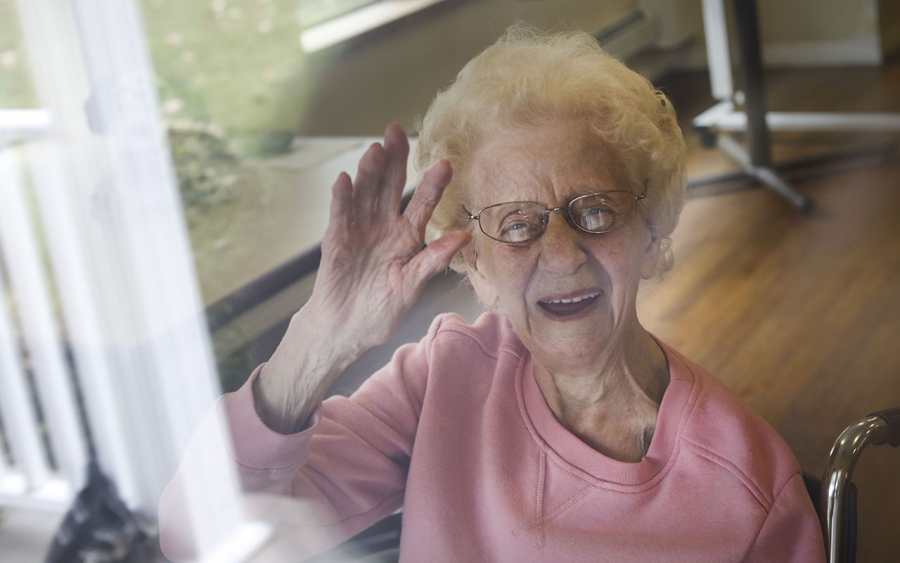 Celestine "Sally" Szemenciak, 107, waves through a glass door at her daughter, Deanna Machtel, 76, at the Beechwood nursing home in Amherst, where Szemenciak is a resident, on Tuesday, March 24, 2020. Visitors were banned from entering nursing home throughout New York State beginning March 13 as a precaution against the Covid-19 virus. (Derek Gee/Buffalo News)

A sight to behold

For Deanna Machtel, the chance to be less than a few feet away from her mother, separated by only a sheet of glass, temporarily set aside the anxiety brought on by the visiting ban.

Machtel said her mother began excitedly waving at her as soon as she was rolled up in her wheelchair to the door window.

“I could see her, I couldn’t touch her, but it was just like being there. I’m still getting teary thinking of it. It was more than I had anticipated,” Machtel said after the Tuesday afternoon visit.

The closest they had come before that during the visitation ban was a video chat last Saturday.

“Mom was more intrigued with seeing us and pointing to us on the screen. I said, ‘Mom, talk to us like you’re on the phone,’ ” Machtel said, pausing to marvel over the changes her mother has experienced.

Yet the visiting ban and virus that has prompted it, to some extent, is not a first for Szemenciak.

As a child, she survived the Spanish flu epidemic, which killed millions worldwide.

“Mom told us how she remembered seeing people hang a piece of cloth from their doors if someone had died inside from the flu,” Machtel said of the 1918 epidemic.

Machtel is hoping to make more happy memories with her mother.

“She’ll be 108 on Palm Sunday and I am hoping I’ll be able to bring some cupcakes to the nursing home, even if I can’t go inside,” the daughter said.

But for now, Machtel said she is cherishing what her mother said toward the end of their window visit: