Mary Jane P. Irish began sewing as a young girl, and as a young woman branched out into embroidery.

But it wasn't until the last decade of her life that her talent and creativity focused on a specific style of "amazing beautiful, ornate embellished work," said her daughter, Johnna St. Clair. Mrs. Irish embroidered silk panels with butterflies, birds, flowers and insects "decorated with brilliant colors, tiny crystals and raised textures," then finished them with antique frames.

Her elaborate, colorful work was exhibited in the Springville Library and Springville Senior Center.

Mary Jane Phyllis Irish died on March 21, 2020, in the Cleveland Clinic after a two-month battle with cancer. She was 71.

Her family described Mrs. Irish as "a gifted embroiderer, masterful tailor, devoted community activist, collector of antiques and finery and formidable bargain hunter. What gave her the most joy was her devotion as mother and grandmother."

She was born on Jan. 25, 1949, in Buffalo, the youngest of four children of Gladys Ruth Cobb and Norman Paul Backes.

She attended Lancaster High School and graduated in 1966 from Springville-Griffith Institute. She attended Broome Community College and in 1990, when she was 41, earned a bachelor's degree in Management of Human Resources from SUNY Fredonia State. 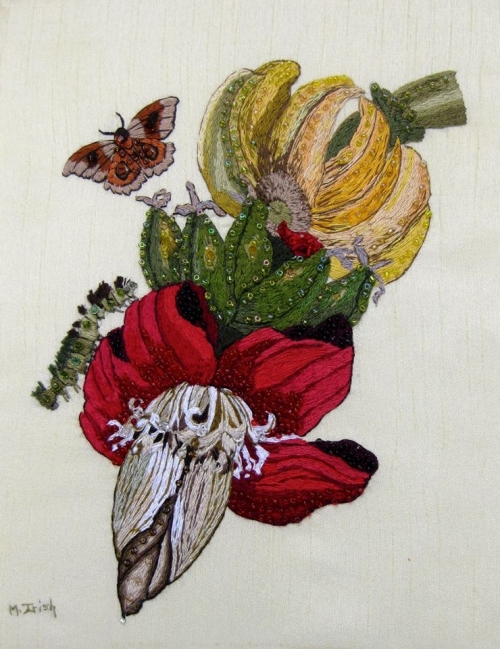 Embroidery of a lily by Mary Jane Irish

She and Ronald Andrew Wellman married in 1967, and raised a family. They separated in 1976.

In 1979, she reconnected with Thomas Irish, whom she had met in an art class in high school. They married on Sept. 25, 1982, in Springville.

Mrs. Irish was co-owner of several businesses, including the East Concord General Store around 1980 and the Tom Irish Gallery in Springville from 1990 to 2001. She enjoyed working as a substitute teacher for Special Services at Springville-Griffith Institute.

She was past president of the Springville Rotary Club, and in April 2006 earned its highest honor for outstanding leadership, the Paul Harris Fellowship Award, from Rotary International. Mrs. Irish was cited for organizing a forum that consulted local business, political, social and community leaders on local needs.

In the 1990s, she was executive director of the Springville 3-C program, which stood for "Our Community, Our Children, Our Challenge."

She was one of the founding members of the Springville Center for the Arts and volunteered for a variety of Springville nonprofits, including Mercy Flight, Rails to Trails and the Springville Historical Society. She was instrumental in securing new medical equipment for Bertrand Chaffee Hospital. Over the years, she participated in and organized fundraisers for many groups and causes, her daughter said.

Since 2014, she had been treasurer of the Springville-Griffith Community Education Foundation and served on the leadership council of Salem Lutheran Church.

Mrs. Irish collected ornate glassware and dishes and "all things Wedgwood," her daughter said. "She combed meticulously through garage sales, thrift stores and antique co-ops. One of her favorite places to visit was the Salamanca Antique Co-op."

She was also a poet, writing "sharp and insightful poetry on the human condition," St. Clair said.

Mrs. Irish, said her daughter, had a large circle of acquaintances and a few very close friends, including one lifelong friend since elementary school. She loved organizing and attending parties, her daughter said – "We always had the best family birthday and holiday parties."

An avid reader, she and her husband enjoyed reading to each other in the evenings. "Tom went to visit her in the Cleveland Clinic over the last two months and read to her there," St. Clair said.

A celebration of Mrs. Irish's life will be held at the Salem Lutheran Church in Springville at a date to be announced.