As the world continues to deal with the worldwide Covid-19 pandemic, a webinar was held last week with the fishing public interested in what was happening with Lake Ontario Chinook salmon stocking in 2020.

Bottom line: A new stocking strategy will be taking place that will give anglers in the open lake, fishermen taking advantage of the staging fishery off the creek and river mouths, along with tributary fishermen, the biggest bang for their slightly diminished stocking efforts.

The state’s Department of Environmental Conservation announced last fall it would be reducing salmon stocking another 20% based upon the spring forage base trawls for alewives, the primary baitfish for Chinook salmon. Due to the reduced forage numbers, fisheries managers were facing a decision. They turned to the Lake Ontario Fisheries Management Focus Group for input.

The group, made up of eight open-lake anglers and eight tributary anglers, were queried on several options. One: Keep everything the same and reduce numbers by 20% across the board. Or two: Concentrate salmon stockings at fewer locations in the lake (all in pens), giving them a better chance for survival and provide higher catch rates for the staging and tributary fisheries. The advisory group selected the second option. 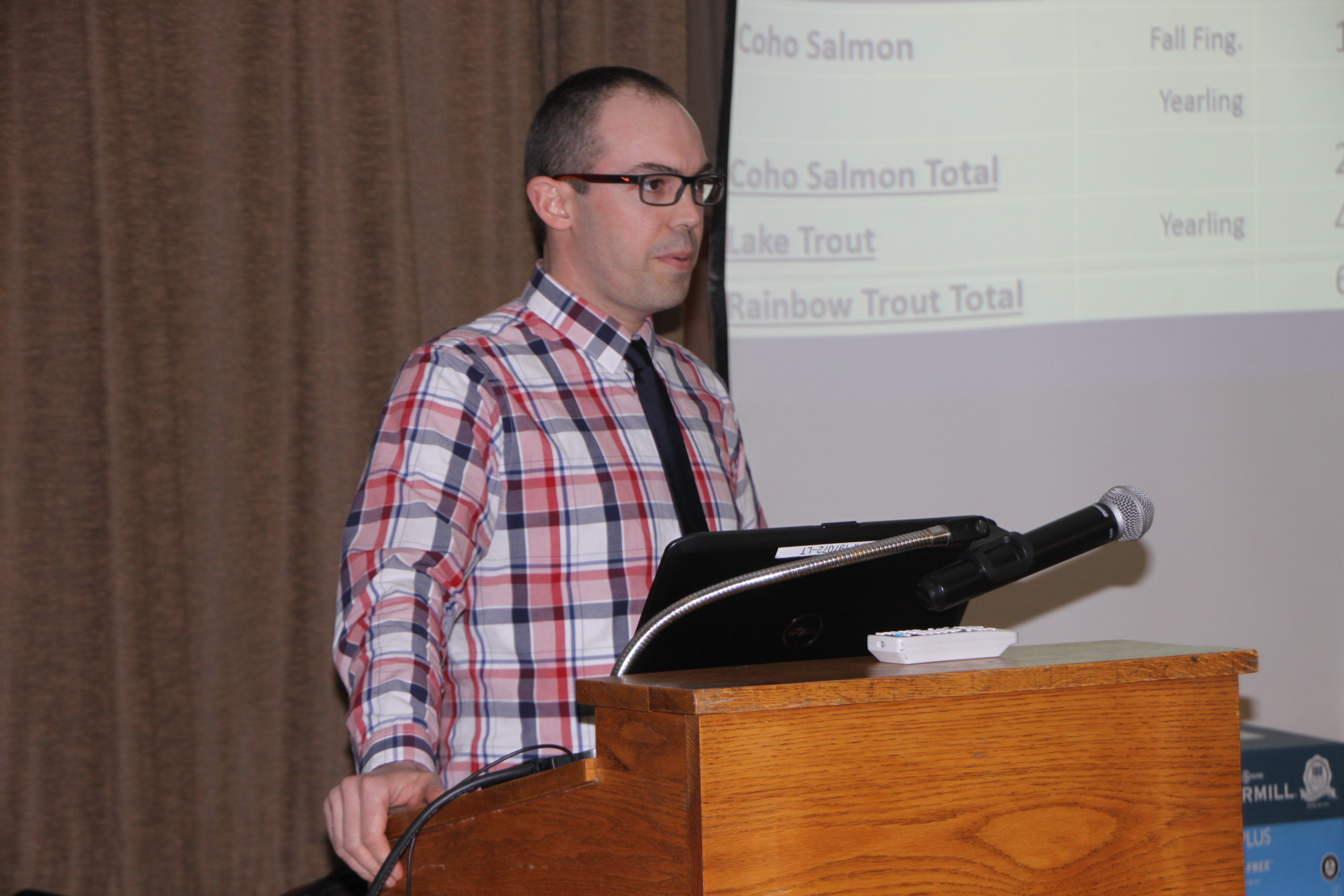 “Concentrating stocking and providing high catch rate fisheries is the best use of stocked Chinook salmon,” said Lake Ontario Unit Leader Chris Legard, who spearheaded the webinar. “Chinook salmon stocking will be concentrated at seven locations in 2020. These stocking locations all have a history of high fishing effort in both the open lake and staging/tributary fisheries.”

The five prime salmon stocking locations that were designated in this strategy include: 18 Mile Creek/Olcott, the Oak Orchard River/Point Breeze, the Genesee River/Rochester, the Oswego River/Oswego and the Salmon River/Pulaski-Altmar, where the Salmon River Fish Hatchery is located.

Because of the Salmon River Fish Hatchery and the need to keep the reproductive cycle going each fall with returning fish, the biggest number of salmon (300,000 fish) will be released directly from the hatchery into the river. The other four featured ports will receive 111,392 salmon, all reared in pens. Remember that by rearing salmon in the pens (based on previous studies), the survival rate is more than doubled when compared with fish stocked directly from the trucks.

Two other locations receiving stockings of 50,000 Chinook salmon are the Niagara River and the Black River, also meant to be held in pens. This brings the overall Chinook salmon stocking total to 845,568 for New York. 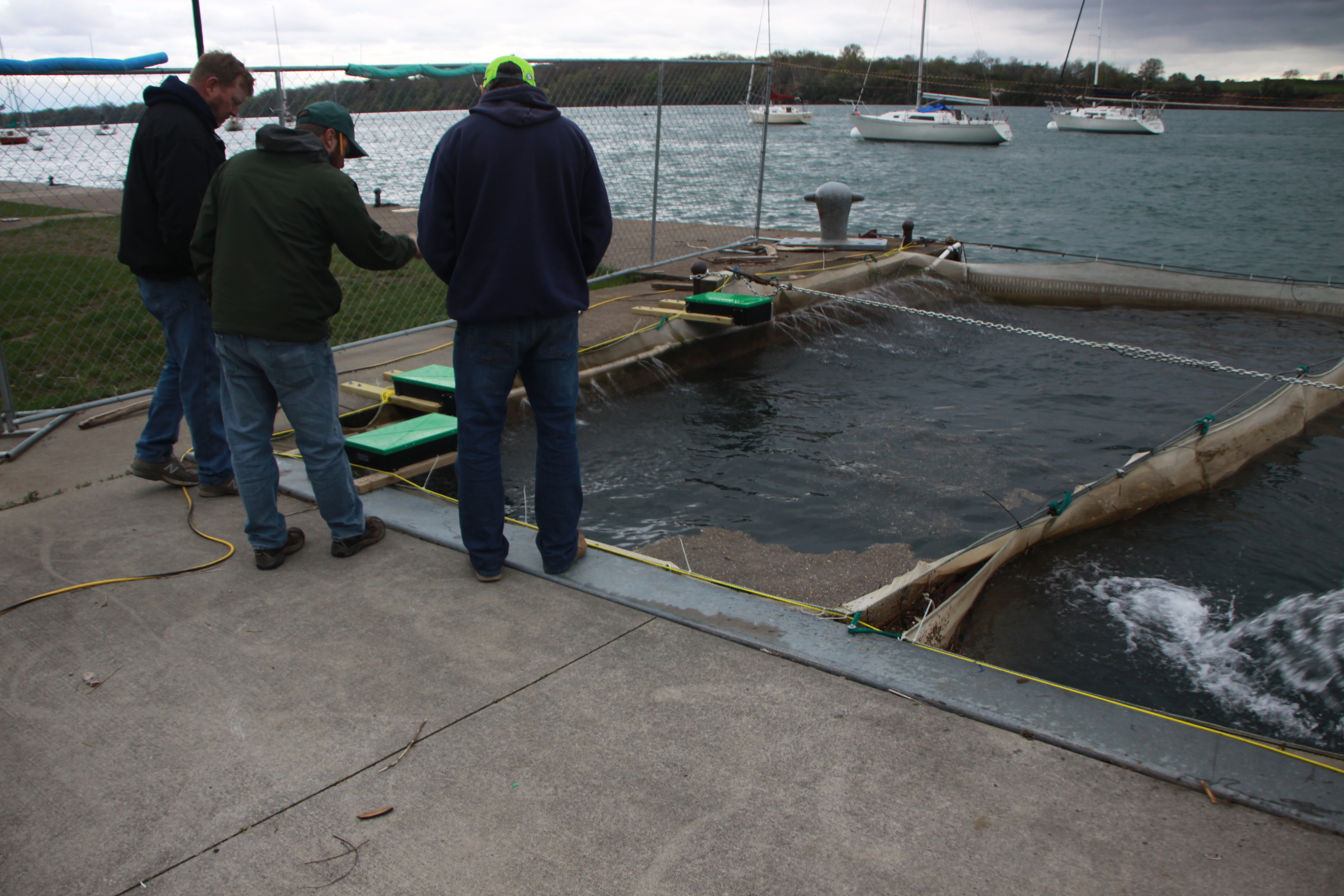 The Niagara River at Youngstown will be one of 7 locations receiving Chinook salmon in 2020. All salmon will be held in pens for 3 weeks. (Bill Hilts, Jr./Buffalo News)

“The decision to stop stocking some locations, including some pen-rearing projects, was not taken lightly and was done with the best interest of the overall Lake Ontario fishery in mind,” said Legard.

“Recently-stocked fish are highly susceptible to predation by both fish and birds. Stocking larger numbers of fish creates a buffer, where there are simply more stocked fish than predators can consume. When fewer fish are stocked, a greater proportion of the stocked fish are likely to eaten by predators.”

Earlier this year, invasive zebra mussels were found in Delta Lake – a water source to the Rome Fish Hatchery. The DEC confirmed its worst fears when it found documentation that zebra mussel larvae was in one of the hatchery’s outdoor raceways.

The Rome Hatchery is one of the DEC’s largest fish production facilities, producing almost 160,000 pounds of brook, rainbow and brown trout annually. The agency is in the process of developing both short- and long-term strategies, attempting to limit the spread of this aquatic invasive species. Because of this concern, 2020 stocking may be limited to only bodies of water that already have a zebra mussel presence … like Lake Ontario.

The coronavirus is having its impact felt on other fisheries management issues, such as with the tagging of the Chinook salmon being stocked. Plans were underway to resume with the tagging of Chinook salmon after a study of Coho salmon was completed. Tagging this year was halted when the close quarters of the tagging trailer became an issue and the work could not be accomplished safely. Staffing was also an issue with a down-sized work force. The last time Chinook salmon were tagged was 2010, 2011 and 2013. At that time, nearly 50% of all salmon found in the lake were naturally reproduced.

It was time for a change regarding a stocking strategy.

“Current Lake Ontario salmon and trout stocking allocations were set decades ago based on shoreline distance within each DEC Region,” says Legard. “Current allocations do not necessarily account for angler preferences, fishing effort in a particular area, geographic and seasonal differences in fish distribution, or potential to benefit both open lake and tributary fisheries.”

If you have any questions on the new stocking initiative for Chinook salmon, contact Legard at 315-654-2147 or email christopher.legard@dec.ny.gov.