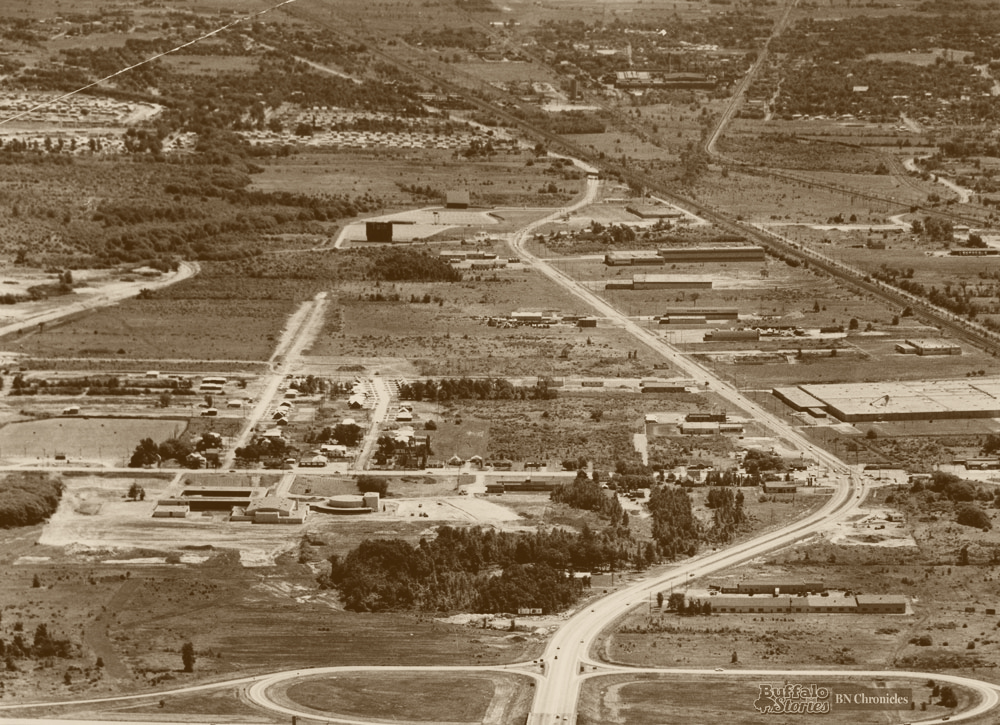 An aerial view of Walden Avenue at Union Road in 1958. Decades before the building of the Walden Galleria, Cheektowaga High School is perhaps the easiest landmark to identify. The on- and off-ramps of the Thruway on Walden at the bottom of the photo help situate the rest of the photo, as well. Just on the right edge of the page, east of the Walden/Union intersection, is the longtime home of Brand Names. Off in the distance, the Twin Drive-In and Twin Fair, both of which closed in 1982, can be seen at the corner of Walden and Dick Road.

Beyond discount retailing, Twin Fair made every attempt to offer all that a postwar suburban family could want at a single location. That first Twin Fair included a Kiddie Land parking lot amusement park, as well as the Twin Drive-In theater across Walden.

The notion of suburban splendor continued at three more stores by 1959, including on Niagara Falls Boulevard at Sheridan Drive and Transit Road near Wehrle Drive. On Eggert Road in Tonawanda, Twin Fair operated at various times amidst the Fun & Games Amusement Park, He’s & She’s Disco Nightclub, the whale car wash and a Fotomat. 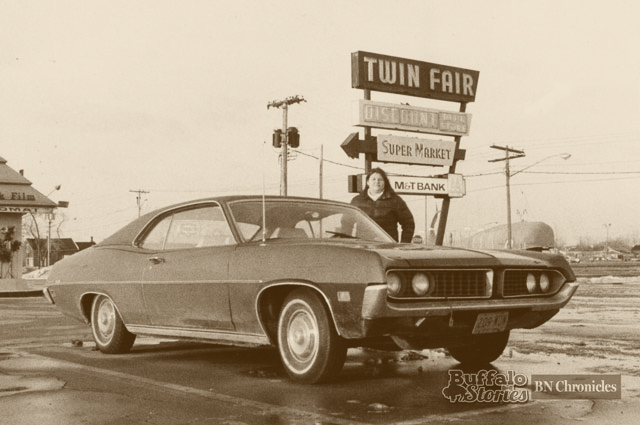 That’s the corner of a Fotomat in the Twin Fair parking lot in Tonawanda. Off in the distance, the beloved and warmly remembered whale car wash. All three of these landmark features were gone by the mid-’80s.

In 1971, Twin Fair reached more than $100 million in sales in stores in three states. By 1973, there were 13 Twin Fair stores in the Buffalo area and 11 in the Cincinnati area, with plans for another 15 stores on the drawing board. 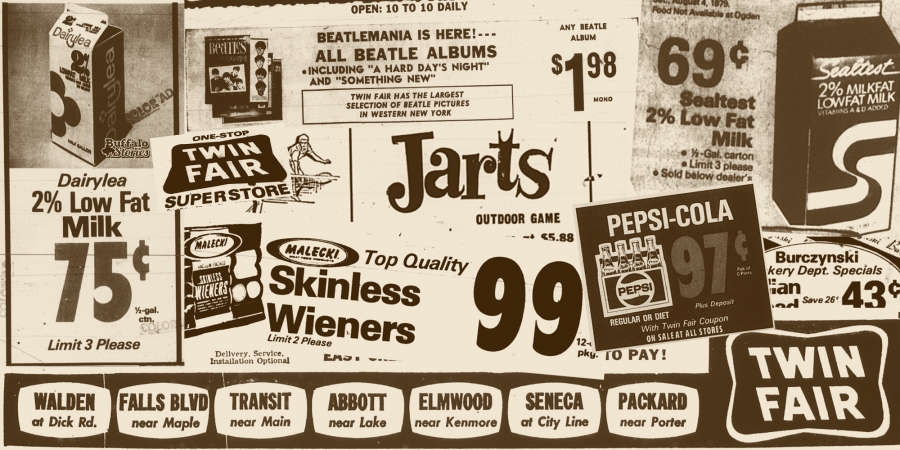 A composite look at Twin Fair ads during the years.

After serving as the home of Gold Circle, Hills and Ames, that South Buffalo/city line location had been eyed by different developers after years of vacancy. Plans for a Walmart on the site never materialized, but in 2014, the old Twin Fair was torn down, and a 100-unit building for those living with mental illness was built on the spot. 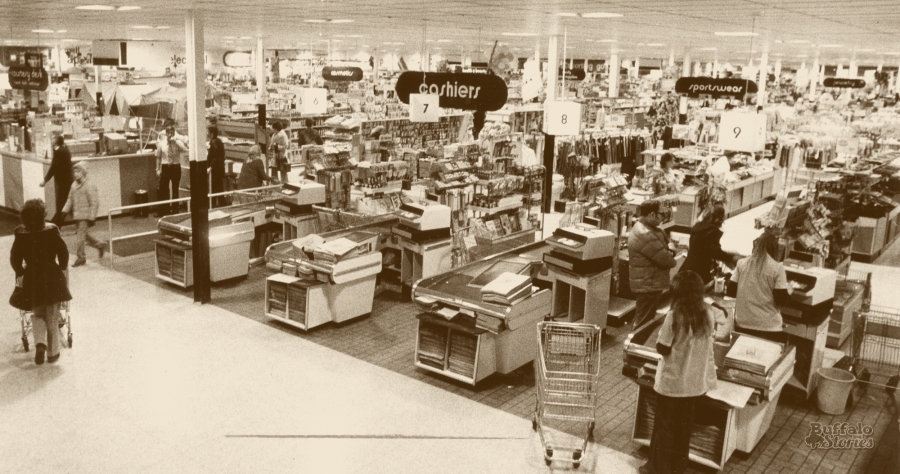 Check out at the Seneca Street Twin Fair,

In 1960, Twin Fair opened a 70,000-square-foot, million-dollar store on the site of Mixer & Co. on Elmwood Avenue near the Kenmore line. The plans called for an 18-hole miniature golf course on the site as well.

Rendering of Elmwood Avenue Twin Fair with golf course and Channel 4 studios in the background.

Located next to the Channel 4 studios where Tops now stands — the Elmwood Avenue store was one of 16 Twin Fair locations up for sale around Western New York as West Seneca-based Twin Fair Inc. looked to pay off debts in 1981. Eight Hens & Kelly locations, bought by the Twin Fair parent company in 1978, also were put up for sale. The future of more than 4,000 Twin Fair employees were hanging in the balance. 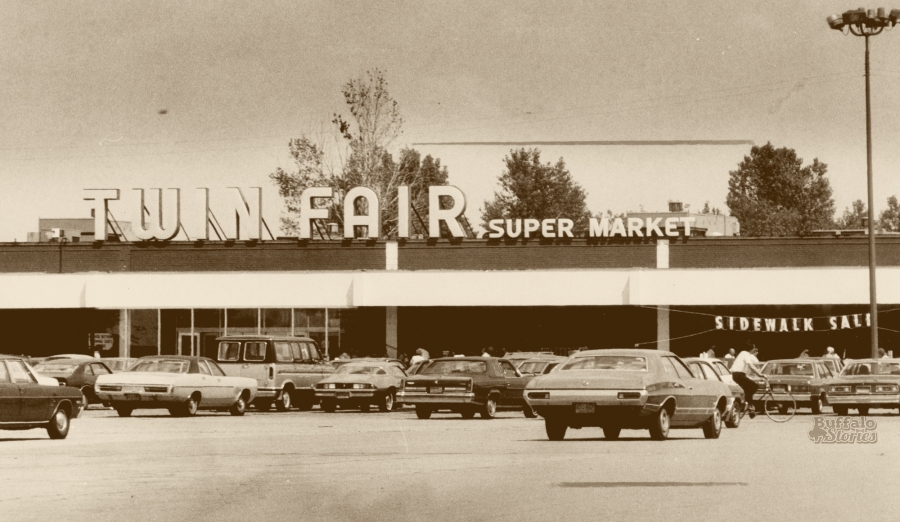 Hens & Kelly locations closed the following year, while Twin Fair was bought by Federated Department Stores. Many of the Twin Fair locations then became Gold Circle stores, before they were sold off in 1988.

In 1991, this particular Twin Fair/Gold Circle building gave way for what was billed as a “Tops Super Center,” replacing a smaller Tops Market on Kenmore Avenue at Grove Street. That location became a Vix Pharmacy, and is now a Price Rite market.