Erie County residents have been tested for Covid-19 at a lower rate than any major county in New York State, according to a Buffalo News analysis of testing figures released by Erie County and New York State officials.

The low testing rate comes even as Erie County shattered the 100-case mark on Tuesday for residents who test positive for the virus. Erie County ranks among the top 10 of all counties, outside the five boroughs of New York City, with the most positive cases of the new coronavirus illness.

Erie County's rate? Less than one test per thousand residents.

"We have an issue here," said Erie County Executive Mark Poloncarz. "We're not denying it."

The county received additional testing chemicals from the U.S. Centers for Disease Control and Prevention on Monday afternoon. That should enable the county to test several hundred more cases and narrow the gap.

Erie County had 646 tests pending or completed across multiple labs as of early Tuesday, Poloncarz said. That translates into a testing rate of .7 tests per thousand.

Poloncarz, however, said he believes that figure excludes hundreds of tests from private labs that have been ordered by doctors for Erie County patients. He said the county was not informed about those tests because they were negative.

"There's a narrative in the media that we are the lowest in New York State," he said Tuesday during a Facebook Live update on Covid-19. "I can't do a comparison because I don't know, exactly, every test that has been done in Erie County."

Updated information has been requested from the state, he said. On Monday, Poloncarz estimated that roughly 800 tests had been done countywide. If that's accurate, Erie County's testing rate would rise to to .9% – still the lowest of any major county.

The county's testing numbers are so low that Erie County does not appear on Gov. Andrew Cuomo's daily news conference slides of the top 10 counties doing testing, while smaller upstate counties are listed. 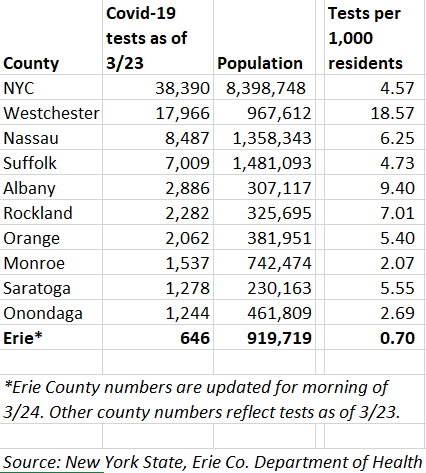 The county has such a limited number of tests that Health Commissioner Dr. Gale Burstein discouraged people on Monday from believing they will be tested by the county for Covid-19 unless they are considered essential personnel or high-risk patients.

Poloncarz said the lack of tests is not from lack of effort. He said he reached out to so many people at the state level, from the Governor's Office on down, that he believes he's blown through his unlimited mobile phone plan. The county has also reached out to other officials and vendors.

The state has provided additional testing chemicals and swab kits, he said, but the county still needs more. Poloncarz said he understands why New York City is receiving the bulk of the testing materials, given the high number of cases and dense population there, but that doesn't alleviate Erie County's need.

As a result of the shortage, the county has scaled back testing on behalf of other Western New York counties.

Local private hospital networks have made announcements about their lab testing capability for Covid-19 – which, in many cases, is much higher than the county's own Public Health Lab testing capacity. But they, too, are hamstrung by the lack of available testing material.

Despite the region's collective lab capacity, suppliers have indicated it may take many weeks to provide the testing materials that local hospital laboratories have said they are ready to process right now.

The good news, county officials said, is that the county's Public Health Lab received additional testing reagents Monday from the CDC, which will enable the county lab to test roughly 350 samples.

With the new infusion of testing materials, Poloncarz said the county may reopen one or more drive-through Covid-19 specimen collection sites. Burstein and Poloncarz, however, warned the county will be more restrictive than in the past in determining who it will test.

"We have a limited number of resources for testing," she said. "So we have to be smart about who needs to be tested."