This year’s Section VI and Monsignor Martin basketball tournaments had all that with an unexpected cherry on top of the sundae. That came courtesy of Hall of Fame women’s basketball coach Luigi “Geno” Auriemma.

The Connecticut leader popped into Buffalo State Sports Arena to check on prized commit Amari DeBerry during Williamsville South’s overall Section VI Class A win against Hamburg on March 11. Geno posed for a few photos before settling in to get a bird’s-eye view of the 6-foot-5 junior phenomenon DeBerry at work. She didn’t disappoint in a pressure-packed situation.

Auriemma’s appearance becomes another highlight, but who knew it would be one of the final images of the season? Auriemma attended what turned out to be the last local high school sports event until who knows when because of the novel coronavirus pandemic.

The New York State Public High School Athletic Association has said it will provide an update on the status of its indefinitely postponed winter regional and championship tournaments Monday. If there’s a way to keep hope alive, kudos to NYSPHSAA officials. But it doesn’t look good with more and more people contracting Covid-19. The New York State Catholic High School Athletic Association and New York Federation basketball tournaments have already been called off. It’s understandable why the postseason suddenly ended.

It’s all about safety, and this column is all for safety.

It’s also all about trying to help people forget about life a while by taking a trip down memory lane.

It's time for of our version of One Shining Moment, the 19th annual Championship Week Awards. With assists from members of our coverage team, including Rachel Lenzi, Budd Bailey, David Ricci and Michael Petro, here is our showcase of some of the best from Championship Week.

Boys: A tough call because each first-team selection played such an important role in his respective team’s championship triumph that each has a case for MVP. That said, we’re picking Ja’Vaughn Jones of Health Sciences.

The Falcons seemed to be on the verge of being upset in the overall Class A final, trailing by 12 in the third quarter to North Tonawanda. However, Jones led a furious comeback, scoring 14 of his game-high 23 points during a 19-6 run that swung things in the Falcons’ favor for good during a 71-67 victory. Jones also played a huge role in the run that enabled Health Sciences to take the lead for good during the second quarter of the Class A-2 final against Amherst. He capped that victory by zipping a hard pass to a wide-open Yeshua Lee for a 3-pointer that gave the Falcons a two-possession lead with 45 seconds left in a 53-49 triumph. 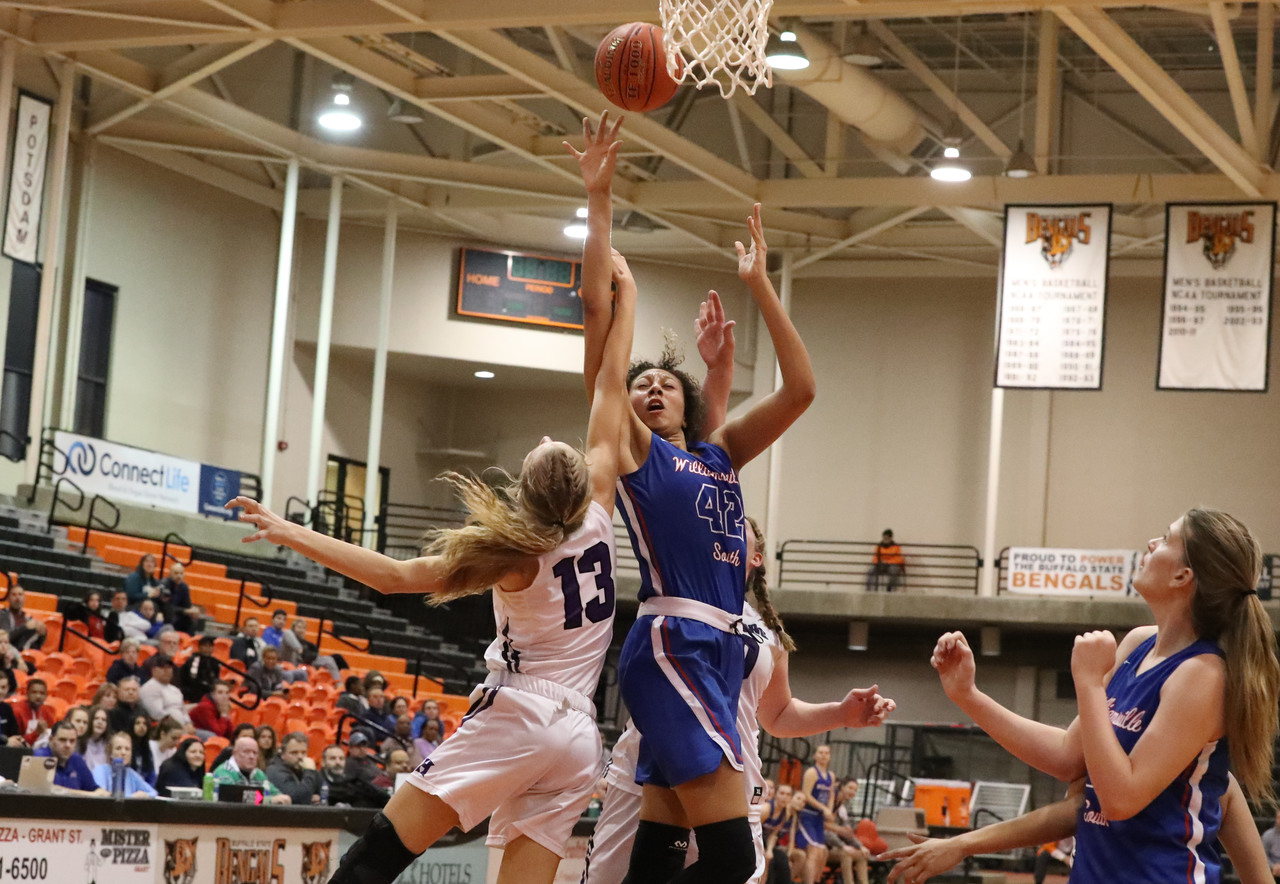 DeBerry followed that with some of the same in front of Auriemma in the overall Class A final win over Hamburg until being saddled by foul trouble in the second half. She put the Billies in position to win during her time on the court. Her teammates maintained the lead until DeBerry’s return. Ball game. 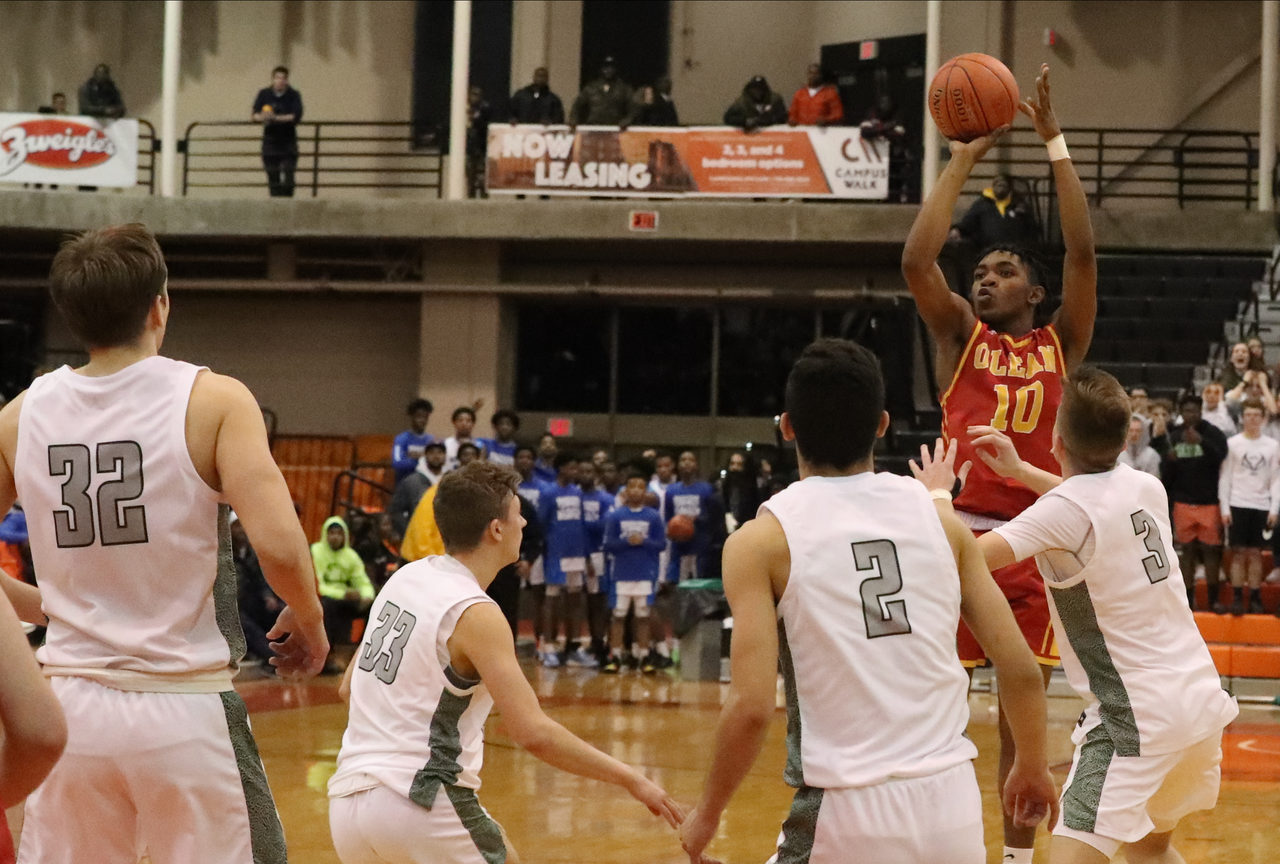 Olean's Covi James hits a three pointer in the final seconds of the game to beat Allegany-Limestone's 37-36 in the Boys Class B Crossover Championship game at Buffalo State Sports Arena in Buffalo on March 10. (James P. McCoy/Buffalo News)

Boys: Olean versus Allegany-Limestone for overall Class B title. The defending champion Huskies trailed rival A/L, 33-23, heading into the fourth quarter. They got after it on defense, limiting the Gators to just two points the rest of the way with Covi James’ 3-pointer with 1.6 seconds left giving Olean the lead for good. Seconds earlier, it looked as if A/L had come up with the defensive stop to preserve the win, but the Huskies forced a backcourt violation to get the ball back. With time ticking away, Kamdyn McClain drove baseline and, at the last second, dished to James at the top of the key who found nothing but the bottom of the net in a 36-35 win. 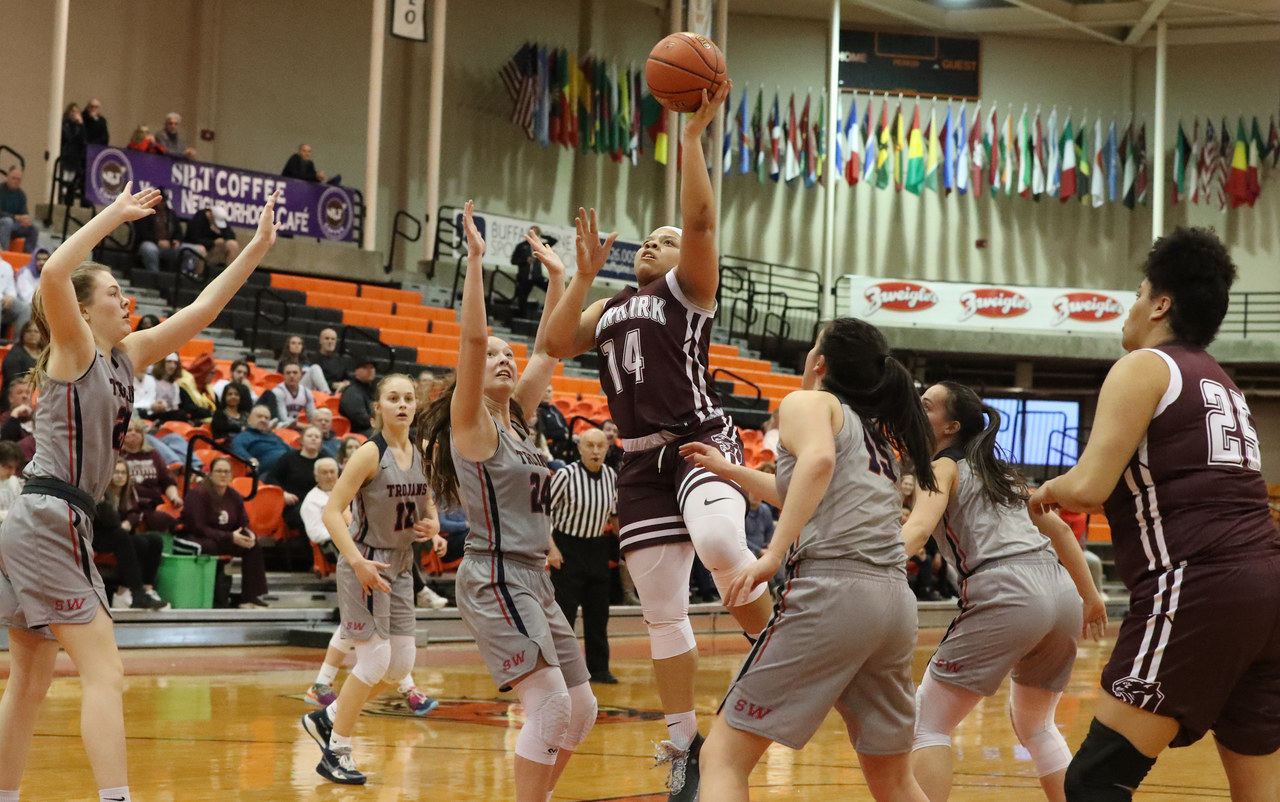 Dunkirk's Kymi Nance scores two points over Southwestern's Sofia Genareo in the second half of the Class B Crossover Championship at Buffalo State Sports Arena in Buffalo on March 11, 2020. (James P. McCoy/Buffalo News)

Girls: Correspondent Budd Bailey covered two games during Championship Week, and each was the dandy of its respective tournament. A day after covering Olean’s win against A/L, Bailey covered one heck of an encore between Dunkirk and Southwestern. Bailey’s lead captured the spirit of the shocking miracle comeback by the Marauders.

Bailey: One of the most amazing games in girls high school basketball history in Western New York can be summed up in a few words: 35 to 2.

With one minute left to play in the third quarter, Dunkirk trailed Southwestern, 60-40. The Marauders looked ready to go home for the season, content with its status of Class B-1 champions. Instead, Dunkirk went on an epic burst – yes, 35-2 – to knock off the Trojans, 75-62, in the Class B final. The game was played before a completely shocked crowd at the Buffalo State Sports Arena on Wednesday.

Nance scored 20 of her game-high 38 points during that epic run that enabled Dunkirk to advance to the state quarterfinals the first time since 1983.

Boys: Normally a shot to clinch the championship would be a no-brainer. However, since James’ shot is spotlighted in the best game, let’s spread the wealth. How about a halfcourt shot at the buzzer for a 47-46 win courtesy of North Collins’ Tyler Robinson? Do or die, he buried the game-winner in the Class D semifinal win against favored Panama, last year’s state semifinalist.

Girls: Degree of difficulty forces me to take Orchard Park’s Leah Harrigan’s runner through the paint while falling to the floor, avoiding a shot blocker that beat the clock and forced overtime in the Class AA final. OP wound up beating Clarence, 56-52, after trailing by five in the closing seconds.

We are headed to OT in the AA Championship game!! 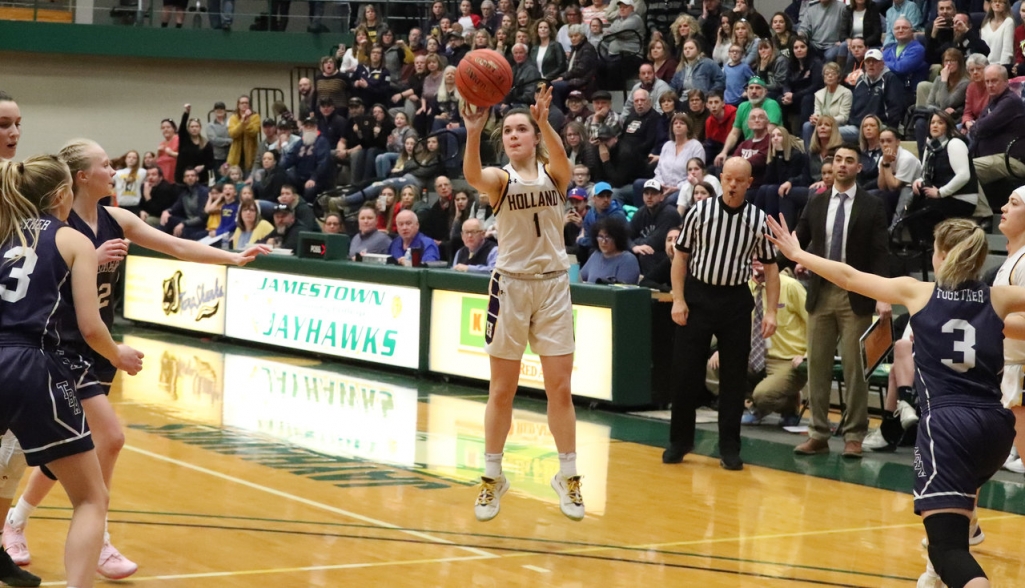 MOST POINTS IN SINGLE GAME

Here are other contributions that did not go unnoticed.

Season-ending milestones: Harris’ 41-point outburst for Cardinal O’Hara might have not been enough to lift the Hawks to their second consecutive Catholic league Class B crown but enabled him to surpass 1,000 career points.

On the girls side, St. Mary’s Shay Ciezki has two more years left to become just the second Monsignor Martin girls player to hit 2,000 career points. She’s halfway there as she joined the 1,000 points club during the Lancers’ season-ending loss to O’Hara in the Monsignor Martin Class AA final.

Say what? It’s rare when fans and referees interact during a game, which is why this brief encounter stands out (aside from it being humorous). During Health Sciences' semifinal rout of South Park, one Sparks fan near the front row yelled toward one of the officials on a potential steal being negated by a foul call: “That looked pretty clean to me.” The ref, who made the call and who also officiates college games, calmly replied: “I had a better view.”

Best dunk: Deshaun Brown of Health Sciences with the putback jam to start the Class A-2 final against Amherst.

Best crowd: The Canisius versus St. Joe’s rivalry lives up to the hype again as Canisius defeated the Marauders in the Manhattan Cup final before a standing-room-only crowd at Canisius College’s Koessler Athletic Center.