This is always the time of year when this corner becomes two-headed. And the calendar this month was no different. It was just three weeks ago on the way out of Arizona to Winnipeg during a Sabres road trip that a detour seemed mandatory.

Camelback Ranch in Glendale on an 80-degree afternoon. Dodgers vs. Rangers. Sunshine. Dodger dogs. A 360-degree walk around the diamond. Nearly 11,000 fans packed into the park, many on the outfield grass berms. It was as glorious as it sounds.

In Arizona spring training, the weather is generally better than Florida, especially early in the schedule. Many of the parks are newer and you have a bevy of games to choose from within a 45-minute drive. There are often long jaunts in Florida to get to games.

This one was on March 1, early in spring. Glad it happened. So much ahead won't be happening. That Astros-Nationals World Series rematch Wednesday in West Palm Beach fell by the boards (as did the Sabres-Panthers game on Thursday, of course).

But this week really crystallizes what we're going to be missing.

All gone. No idea when we'll be able to target Opening Day.

Wouldn't it be great to go back to despising the Astros and worrying if Jose Altuve's wife didn't like his tattoos again?

Lots of great openers were planned for Thursday in addition to those two. Cubs at Brewers. Twins at Athletics. Giants at Dodgers. Cardinals at Reds. Angels at Astros. Braves at Diamondbacks.

Now we wonder. It seems like there's zero chance of playing a 162-game season and if things don't get going well into May or June, you have to wonder how big the asterisk on 2020 will be.

It's easy to see a scenario in which we might be fortunate to get in 100 games this year. And yes, I'm assuming there will be a season at some point. Of course, those are insignificant issues compared to the ones facing the world. Baseball, like the NHL and the NBA and just about all aspects of society, has to wait its turn.

That Sunday morning and afternoon in Glendale seems like three years ago now. 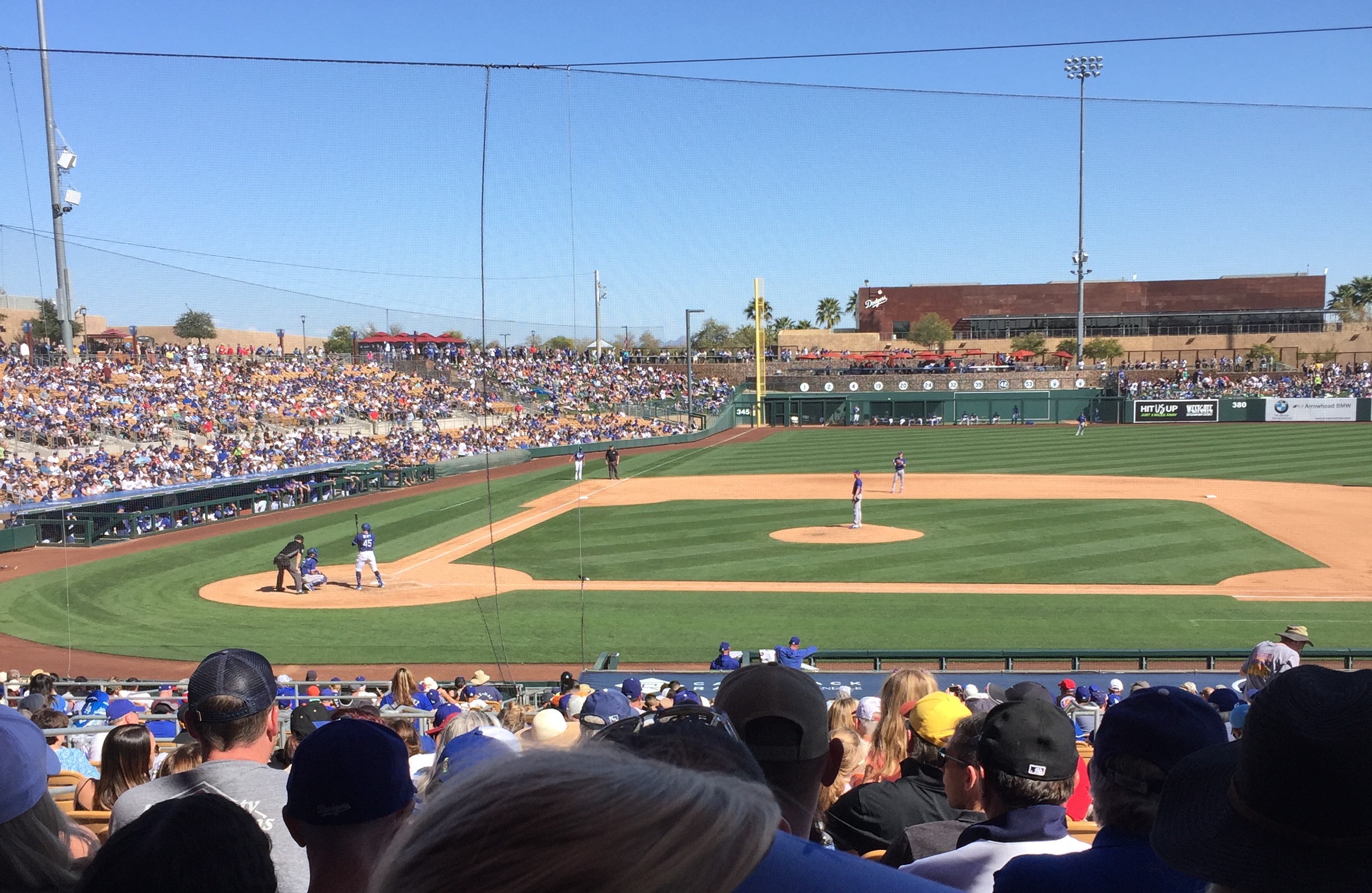 The Dodgers and Rangers play at Camelback Ranch in Glendale, Ariz., on March 1 (Mike Harrington/Buffalo News)

Sale surgery another downer for Sox

Some of the worst team-related jobs in baseball right now have to be the medical staffs of the Yankees and Red Sox. Injuries plagued the Bronx Bombers all spring (how did it take six months to figure out Aaron Judge had a fractured rib?), and now the Red Sox finally decided Chris Sale needed Tommy John surgery after he simply couldn't get through the pain of throwing.

Sale was shut down with elbow soreness last August after going 6-11, 4.40 in 25 starts. The Sox sent him to noted orthopedists who prescribed rest, but his elbow issues never went away and the surgery was announced Thursday. A good way to start a five-year, $145 million contract.

Of course, good luck to Sale and the Sox getting that surgery done in these times when elective surgeries aren't taking place. They didn't know a pandemic was heading our way, but this could have been done last fall, which would have had Sale ready for the 2021 season. Now he's out for this year and not likely to be ready for Opening Day next year, either.

That said, there's not going to be a lot of sympathy for the folks in Boston from the sporting public.

Mookie Betts traded, Tom Brady off to Tampa Bay, the Bruins and Celtics shut down with legitimate championship aspirations and now the Sale surgery. That's a lot of troubles after two decades of triumph.

Pearson's pace will slow down

The shutdown also struck down the daily Nate Pearson Watch coming out of Blue Jays camp. With General Manager Ross Atkins correctly saying his stud prospect was going to start the season in the Bisons' rotation no matter what happened  in Florida, it was quite interesting to watch Pearson light up radar guns -- and social media -- with his 100-mph fastballs.

The Blue Jays were taking the right tact with this and now figure to put their prized possession in Triple-A for an extended period to protect him because of the shutdown. The 6-foot-7 Pearson is just 23 years old and made three starts for the Bisons last season after a promotion from Double-A.

Triple digits are his thing with the fastball, but he's spent the winter and spring working on secondary pitches, especially the curveball. All pitchers are going to have to ramp up carefully when play is given the go-ahead, and one thing the Blue Jays probably don't think is a bad thing is that Pearson will likely miss the cold Buffalo weather of April and perhaps May.

“My slider’s always been way ahead of my curveball, but I’m trying to level it out and make all my pitches pretty elite,” Pearson told Toronto reporters in Dunedin. "I’m really working on it. It’s definitely my fourth-best pitch. It’s come a long way and I’m definitely more comfortable throwing it."

It will be interesting to see what happens in the minor leagues as teams look for ways to get the most revenue out of whatever abbreviated season will be played. One suggestion from Baseball America would be to cancel All-Star Games at all levels, which seems likely, and to not have any playoffs.

While that seems drastic, it would guarantee an extra couple of weeks of regular season games that teams could sell whenever the schedule is worked out. It remains to be seen on all levels how an abbreviated season will work, but in the minors one scenario has the schedule remaining as written and picking up with whatever day is targeted as the opener.

That will leave some inequities that could be soaked up by rescheduled games at the end of the season for all teams in place of playoffs. Championships would be awarded on the basis of regular-season records and players would get in some extra development time.

Minor-league players were sent home last week from teams' spring complexes and into a vastly different life. They don't make a lot of money, especially at lower levels, and many work part-time jobs during the winter to augment their workout needs. But they don't plan for those kind of jobs during the spring and summer, when they're expecting to be paid by baseball.

Major League Baseball announced Thursday that it will be paying the minor leaguers the spring allowances for housing and food they would have earned through April 8, the day before the minor-league season was supposed to start and when players begin to draw their salaries.

MLB said its clubs are still talking about an industry-wide plan for minor-league compensation starting April 9.

The majors and minors, bitter foes across the negotiating table all winter as they tried to hammer out a new working agreement, are now going to be forced to work together for the common good. It will be interesting to see how that plays out.

* The Red Sox still have Commissioner Rob Manfred's investigation hanging over their heads. Those results have obviously been put on the back burner by MLB for now, but should come out before play resumes.

* MLB has announced its Diamondbacks-Padres series in Mexico City and its Mets-Marlins series in Puerto Rico have been canceled. No word yet on the big one: The Cubs-Cardinals showdown in London in June. Can't see how that one takes place, either.

And then we see about the All-Star Game in Los Angeles and the Hall of Fame induction featuring Derek Jeter, Larry Walker and Ted Simmons come July in Cooperstown. The Hall last week closed the museum to the public and canceled its May Classic Weekend events, including its annual Legends Game

* Item to watch: If the coronavirus sparks shutdowns in the construction industry as many observers assume it will, can the Red Sox move their Triple-A club to Worcester, Mass., for 2021? Construction of Polar Park there continues, but it's unknown how long that will last. Remember, this is supposed to be the final season for the Sox at McCoy Stadium in Pawtucket, R.I.