When Jerry Daniels Jr. opened the doors to his Carl-Jeff Barber Shop at 7 a.m. Saturday, people were already waiting outside to get a haircut.

"Oh yeah, just like at the supermarket," said Daniels said later in the day, taking a brief break in between seeing customers and answering the phone.

Daniels and four other barbers at the 50-year-old shop, at Jefferson Avenue and Carlton Street on the edge of Buffalo's Fruit Belt neighborhood, expected to be busy right up until closing time at 8 p.m.

That's when barber shops, hair salons, spas, tattoo parlors and body piercing establishments across the state must close under the latest restrictions imposed to limit the spread of Covid-19.

The state announced the news on Friday, leaving the shops and their employees scrambling to plan for the imminent closings and an uncertain future.

"Chaotic. Everybody's trying to rush to get in," said Daniels, who in 1985 joined the barber shop his father, Jerry Sr., started in 1968. The elder Daniels, now 87, still cuts hair, but is staying away now as a precaution.

People have been calling Friday and Saturday to ask if it's true the shop is closing and if they can squeeze in one last trim.

Shutting down Carl-Jeff is a blow to the neighborhood because it serves as a social hub, Jerry Jr. said.

"Sometimes people come in here even if they're not getting a haircut," he said.

They vent about marital problems, talk sports and chat about the news of the day – including Covid-19.

"That's the main topic at this point," Daniels said.

He said clients are disappointed because they don't know when the shop can reopen and Daniels doesn't know, either. "We don't know what to tell them," he said.

It's also an economic blow to Daniels, his father and the four other barbers.

Daniels said he won't have income coming in, but he'll still have to pay utilities, the mortgage on his house, child support and other bills. "None of those things stop while this is going on," he said. 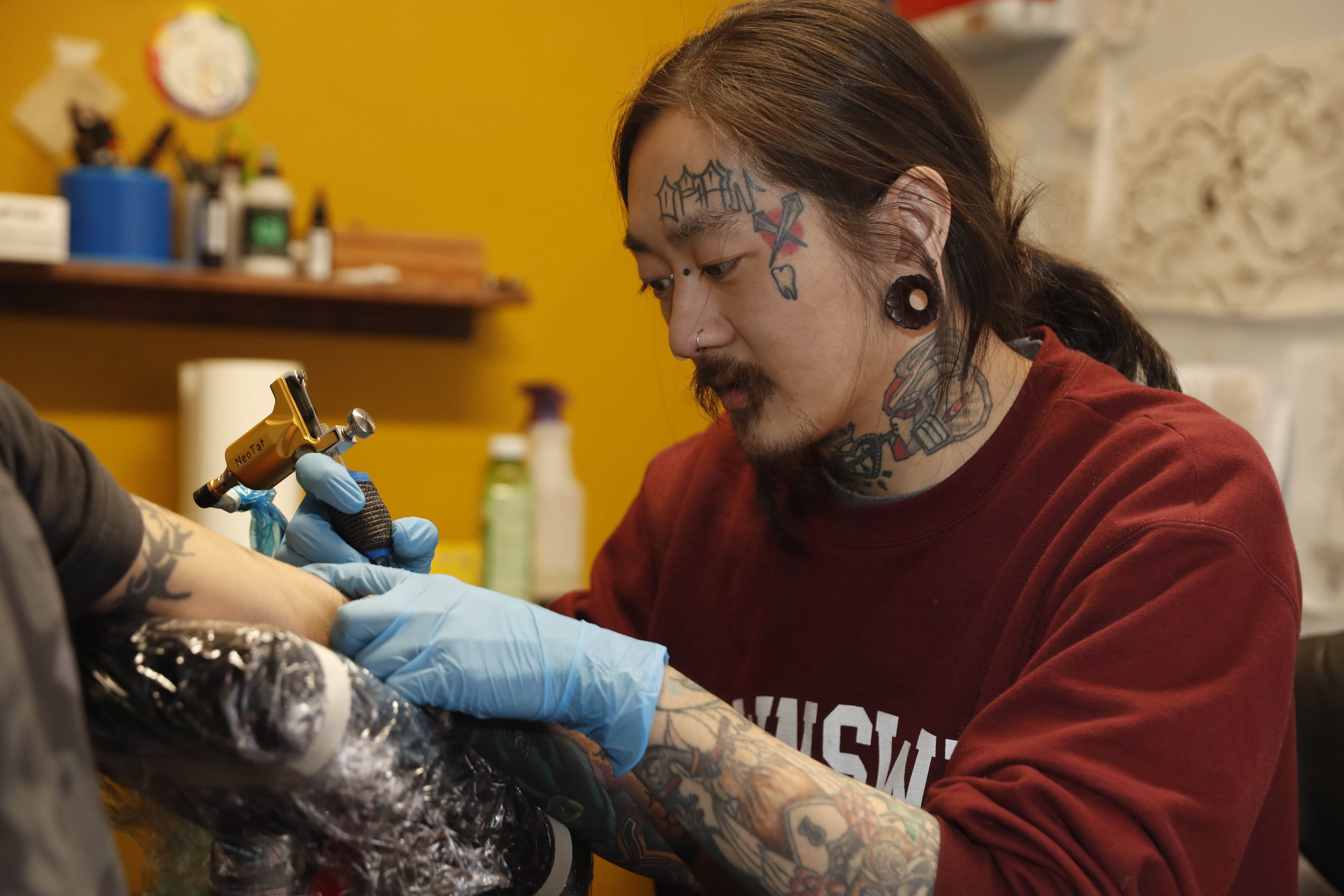 Conor Ketchum, tattoo artist at Renaissance Custom Tattoo, gives Eric Hanzlian of South Buffalo a tattoo Saturday. Ketchum faces an uncertain financial future now that the governor has ordered the closing of tattoo parlors, barbershops, beauty and nail salons to try to slow the spread of Covid-19. "I think a lot of us are working tattoo to tattoo," he said. (Sharon Cantillon/Buffalo News)

Ketchum is a tattoo artist at Renaissance Custom Tattoo near the University at Buffalo South Campus.

Ketchum specializes in traditional Japanese tattoos. He said it's especially upsetting because his primary skill set – designing and carrying out intricate tattoos – doesn't easily translate to another line of work.

"It's definitely worrisome for us," said Ketchum, whose second stint at the shop began in November. "I think a lot of us are working tattoo to tattoo."

His first customer on Saturday, a regular client, received two small tattoos – a skull inside a coffin and a dagger. He said he'll work on one more before the shop closes at 8 p.m. for who knows how long.

"It's definitely going to be depressing," Ketchum said. "A lot of uncertainty."