The call came Thursday afternoon, while Kelsey Milley was in her room at Mercy Hospital of Buffalo. She was with her husband, Steve, watching as a lactation specialist offered some lessons on feeding their newborn baby. Kelsey glanced at the phone and realized it was her father, Frank Badaszewski, who had a question.

Add another “s” after the fifth letter of Badaszewski's name, and you understand why his buddies gave him one of the great Buffalo nicknames of all time at the old Seneca Vocational High School. He had a sudden proposal that made his daughter laugh, which at that moment was exactly what she needed.

Like the rest of the planet, Western New York is brimming with tales of how quiet yet profound milestones are totally altered amid the avalanche-like shift into worry about the Covid-19 virus. Kelsey’s delivery day, certainly, was emblematic.

She and her older brother Jim remain close to their parents, Badaszewski and his wife, Jeanne, of South Buffalo.  Badaszewski, the airfield supervisor at Buffalo Niagara International Airport - he is among those to thank when your plane takes off, despite the snow - never loses his own sense of gratitude about being a father.

When Kelsey was an infant, Badaszewski would come home from work and stand above her crib, marveling at each gentle breath as she slept. He remembers teaching her to ride a bicycle, building toward that moment of utter joy when she moved past fear and figured out how to do it alone.

In a way, in these times, that is how she and Steve, both 28, had to respond to childbirth. They met a few years ago, during a Toby Keith concert at Darien Lake. Married in 2018, they had big plans for the birth of their firstborn, whose scheduled delivery date was St. Patrick’s Day. 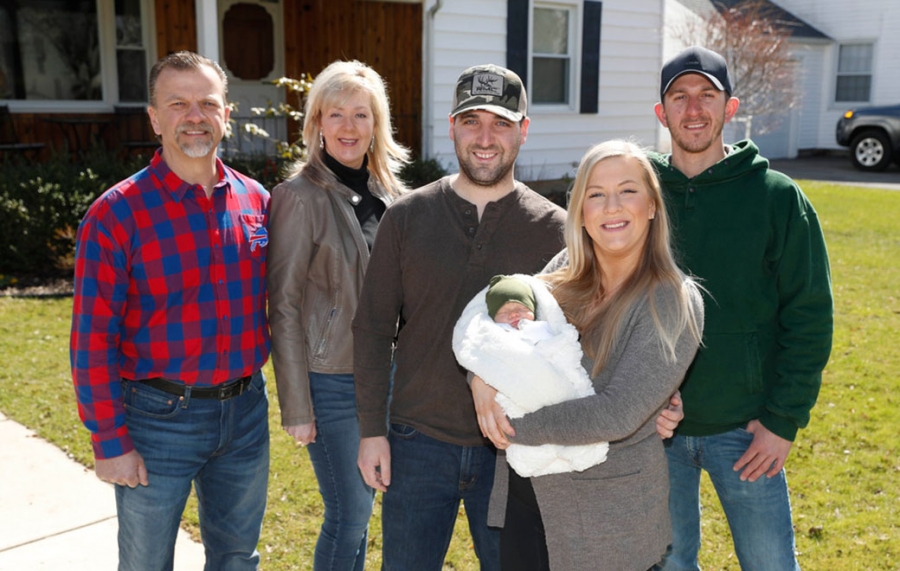 The couple decided they did not want to know beforehand about gender. Instead, they would ask Kelsey’s parents and Steve’s mom and dad, Kris and Mike Milley, to be nearby in a waiting room. They intended to invite them in just after the moment of birth and reveal the surprise by wrapping their baby in pink or blue.

Steve is a corrections officer, while Kelsey does administrative work for the Niagara Frontier Transportation Authority at the Buffalo Metropolitan Transportation Center. They still have six of their eight grandparents – all in their 80s and 90s – and for months they pictured the hospital as a jubilant meeting place, with all these people they love showing up to celebrate.

It did not work out that way. Kelsey’s water broke Tuesday. As soon as she and Steve walked into the hospital, they learned of the new rules under Covid-19: To protect themselves, their baby and other patients, it could only be the mother and one guest. That was Steve.

“I started bawling,” Kelsey said. Down deep, she had a feeling both her mother and mother-in-law might have ended up right there for the instant of birth, in the delivery room. She was looking forward to that moment of generational communion when an infant, a tiny bundle in a blanket, is handed around from grandparent to grandparent.

Eerily quiet streets in WNY, the new normal of Covid-19

Yet she and Steve, once past the surprise, understood the nature of a threat that was closing major institutions around the globe. At 12:23 p.m. Wednesday, after 13 and a half hours of labor, Kelsey gave birth to her new baby, weighing in at 7.2 pounds and 21 inches long.

Once she felt up to it, she Skyped with both sets of grandparents. In a digital moment that makes Kelsey’s mother, Jeanne, so emotional she can barely describe it, the Badaszewskis and Milleys found out the gender when Kelsey held up little Nash Paul Milley and said: “Meet your new grandson.”

The couple promised their four parents they could hold Nash as quickly as possible, which turned out to be during a couple of quick stops Friday on their drive home to Hamburg, from the hospital. Still, it was a hard thing for Kelsey that her mom and dad could not be there for the birth, only underlined by the way her folks learned about the pregnancy, in the first place.

Last summer, a doctor officially offered Kelsey and Steve the good news. Kelsey decided to tell her parents on a July day, right after they made a quick shot to Rushford to pick up a couple of loads of wood for a fence Kelsey's brother Jim was building.

Frank Badaszewski was in front in his pickup as they drove back, with Steve and Kelsey following behind him. As he passed around a curve on a two-lane highway, another driver crossed the double yellow line at high speed and smashed into him. Badaszewski managed to turn the wheel just enough to avoid a head-on.

Steve and Kelsey watched in horror as Badaszewski's truck tumbled off the road, rolling twice like a crushed aluminum can. They pulled over and ran toward the wreck. Steve remembers thinking, in his fear: There is no way he could have lived through this. 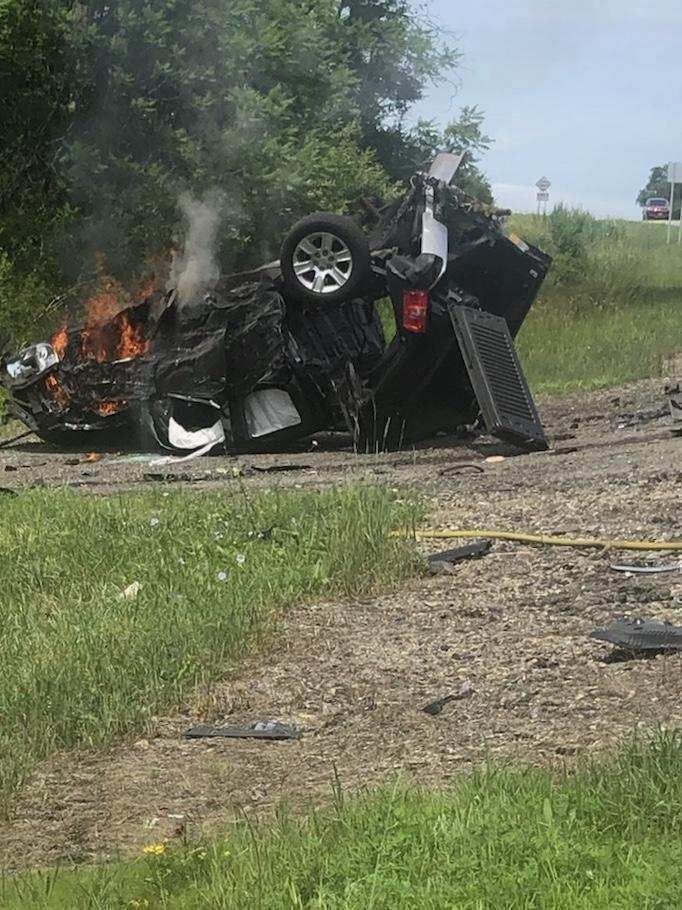 Frank Badaszewski's pickup, after a near head-on. (Family image)

Once they reached the pickup, smoking and totaled, they heard movement inside.

Frank Badaszewski, with only a broken rib and some bruises, crawled out the hole of what used to be a window.

Once again: Add a second “s” as the sixth letter, and you have his high school nickname.

Even so, as Kelsey and Steve waited for their father at the emergency room, they decided they would hold off for a day or two before telling Frank and Jeanne their news.

Eight months later, Kelsey gave birth to this beautiful baby boy. Many of her nurses were family friends from the neighborhood or St. Martin of Tours Church, which provided a measure of consolation to Kelsey's mom. But it was also “heartbreaking,” as Badaszewski put it, to see this new grandson – in actual proximity, such a short distance away – for the first time only through a computer screen.

“We wanted to hold him, to hug and kiss him,” said Badaszewski, who decorated his house with blue lights in Nash's honor.

He and Jeanne often take long walks together on McKinley Parkway. Thursday, before Badaszewski left for his job, he asked his wife if she wanted to join him for a stroll. She was working from home and had to handle a conference call, so she told him to go ahead.

Badaszewski said the idea only hit him as he walked down the street. The hospital really was not so far away, and he found himself drawn in that direction. He called Kelsey to ask if her room happened to have that view.

Not really, she said. Her window looked out on the hospital parking ramp. 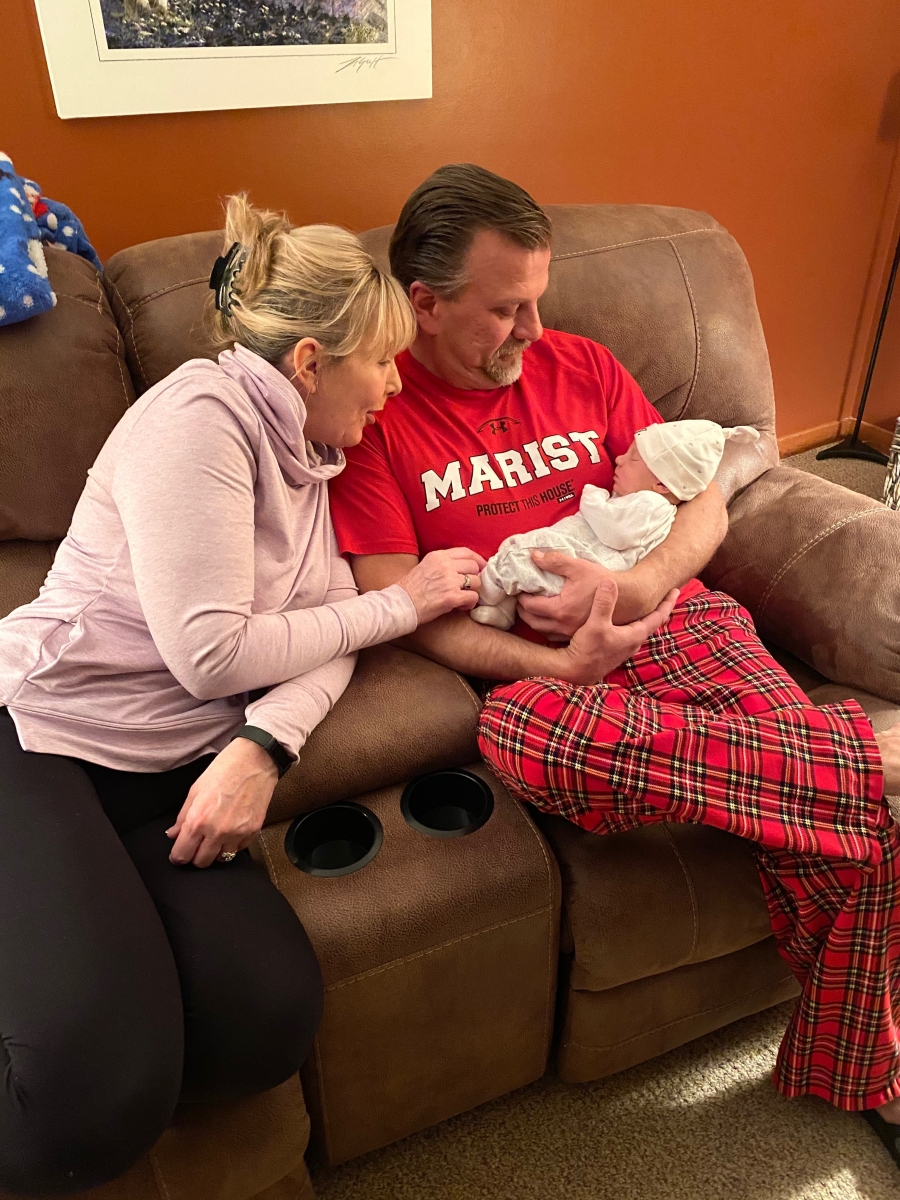 Jeanne and Frank Badaszewski, meeting their newborn grandson for the first time Friday at their South Buffalo home. (Family image)

That was enough. Frank had his plan. He went to the parking ramp and started going up level by level, talking it out at each vantage point by phone with Steve and Kelsey, until he found just the right spot on the third floor where he could look across to the window of his daughter’s room.

Across the divide, across the worry, across South Buffalo: Grandpa, here is your grandson.

It only lasted a few moments, because Badaszewski said “a tear came to my eye” and his wife suspects there were a  lot more tears than one. That connection made it easier, somehow, to go and take care of his runways, and by the next night he and Jeanne held the baby in their arms.

As for Kelsey and Steve, now that Nash is safely home, they like to think someday these difficult weeks will fade. They will tell Nash about the strange times in which he was born, about the way his maternal grandfather knew the only shot at seeing this new arrival in person was to do what he has done at hard moments throughout his life.

When needed, Badaszewski adds that extra “s” to his last name. 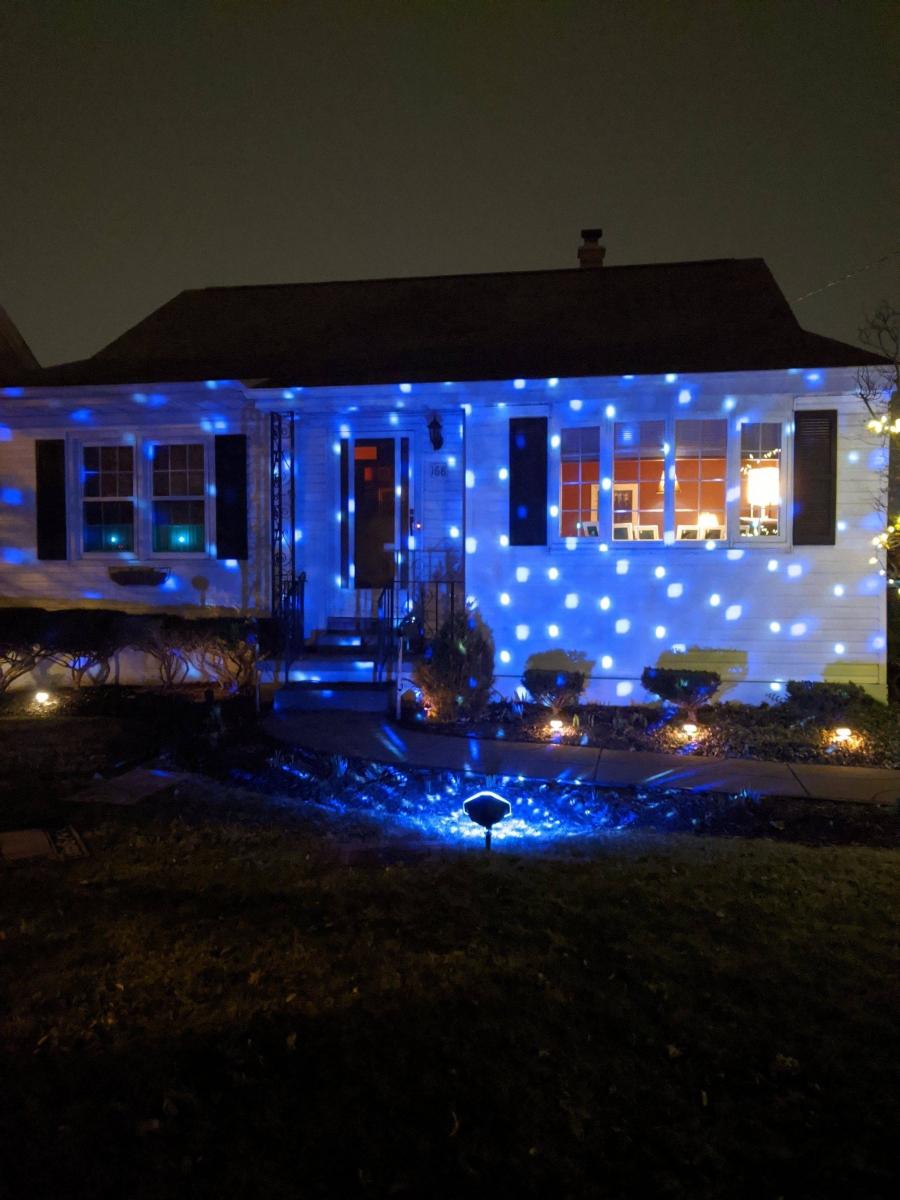